How Much Is The Love Me Like You Do Singer Ellie Goulding Worth? Her Sources Of Income, Assets, and Charitable Works 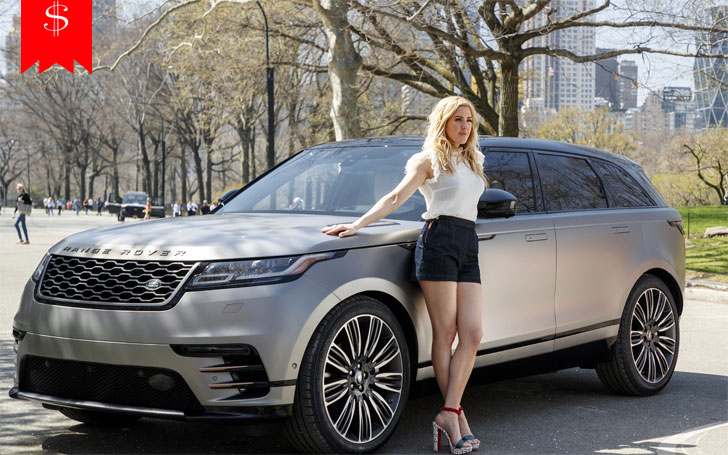 Ellie Goulding who rose to fame in 2010 with the success of her singles Starry Eyed and Guns and Horses hasn't looked back since then. The British singer toped at the BBC's annual Sound of... poll and also received the Brit Awards for Critics' Choice in the same year.

Along with the fame, no doubt the singer and actress has also earned handsome amount of money. How much is her net worth? Well, let's break down all details about her houses, cars, and sources of income here.

How Much Is The Love Me Like You Do Singer Ellie Goulding Worth? Her Sources Of Income

Her successful singing career, live musical, brand endorsements and acting career are the main sources of her income that helped her to earn such an impressive amount of net worth.

Goulding was successful to sell over 850,000 copies only in the UK of her 2010 debut album, Lights. The album was certified 2x platinum by BPI, and she earned $600,000 from the selling of the album.

Her second album released in 2012 titled, Halcyon was also warmly received by audiences as she was successful to sell 33,425 copies just in the first week of its release. The album was also certified 3x platinum by BPI, platinum by RMNZ, and gold by RIAA, ARIA, BVMI, and IFPI-SWI. She altogether sold six million copies of the album. The singer was successful to accumulate $1,560,000.

Likewise, her third album Delirium released in 2015 sold over 38,429 copies in its first week.  Over 117,000 copies of the album have been sold as per February 2016. She also received her first  Grammy Award nomination for her single Love Me like You Do from the album.

The price of the tickets of her The Lights Tour was $19.94 in Atlanta and $73 in Boulder, Colo. In 2014, the ticket price of her The Halcyon Days Tour in Madison Square Garden was an average of $115. Likewise, her Delirium World Tour which was conducted in several parts has various price range including starting price of $41 in Rogers, Ark., and price tag from $35 to $65 in Phoenix.

Furthermore, Goulding also performed in several other concerts, alongside Katy Perry in California Dreams Tour in 2011, Bruno Mars in his Moonshine Jungle Tour in 2013 and Taylor Swift in 1989 tour in 2015.

She also performed at the royal wedding of Prince William and Princess Kate in 2011 where she performed Elton John’s song Your Song.

Goulding has also endorsed several brands. She became the face of the British multinational company, Marks & Spencer in 2013. At the time, the British singer alongside other celebrities including Helen Mirren, Nicola Adams, and Monica Ali became a part of Womanism' campaign Britain's leading ladies conducted by Marks & Spencer.

She also endorses the Swiss shampoo, Pantene Pro-V both on television and on the official website of the shampoo.

Goulding is an actress too and has performed in television series, documentaries and films including Who Is...?, The Sound Change Live and Lennon or McCartney.

Throughout her career, the British musician has received several awards and rewards. Altogether Goulding has earned 17 awards along with 66 award nomination including Grammy nomination for Best Pop Solo Performance in 2016.

She achieved two Glamour Awards in 2011 and 2015, four BMI London Awards; one in 2014 and three in 2015, Brit Awards for Best British Female Solo Artist in 2014, Jimmie Awards in 2014, Harper's Bazaar Women of the Year Awards in 2015 and much more. She is also the second artist to top the BBC's annual Sound of... poll and also to receive the Brit Awards for Critics' Choice in the same year.

Where Is Ellie Goulding's House? Her Assets And Lifestyle Details

Goulding owns several properties and houses in a various part of the world. The singer purchased a luxurious house in a central London mews in 2016. The house with three-bedroom is worth $ 3.2 million. The property also has a garden and an airy open kitchen.

She has another house with six bedrooms, a state-of-the-art kitchen and indoor swimming pool in South London. Reportedly, Goulding is renting the property of worth $ 6 million.

She has a flat in Marylebone, West London with price tag £1.5million. She purchased the asset in 2012.

Goulding is also quite fond of layering textures and materials in her room. According to architectural digest, her room has Belgian Classic Slope Arm sofa by RH with starting price $2,095, Timothy Oulton's Wild Chair, and Four Hands' Belmont cathedral floor mirror with a price tag $826.

Furthermore, she decorated her room with Moroccan Wedding pillow of worth $78, an Abstract Art Painting from T30Gallery with price $190 and black and white elephant painting of worth $16.

She is also quite obsessed with shopping and wearing branded and designer wears. The singer wore a stunning black dress by Jenny Packham for the 2018 Oscar event.

She chose a dress and accessories by Proenza Schouler and Gucci for the Pre-Oscar event. Stella McCartney, Bulgari, Saint Laurent, daisy jewelry are some of her favorite brands.

Moreover, Christian Louboutin Yetata Calf-Hair Chelsea Boot is one of her favorite collection. The retail price of the boot is $1,295.

Goulding has been actively involved in several charity events. Most recently, she donated $ 2,802.14 in Hereford to support the survival of vulnerable people in the harsh winter weather.

She also took to Twitter in 2nd March to disclose about the charity.

Thank you, and yes, that was the aim. I don’t know why Herefordians are always so quick to the negative before the positive. I donated an anonymous amount, (not that I wanted to mention) which I do to charity each month, and raise nearly 100k each year https://t.co/0dOHWCAwZM

Likewise, she became the part of the Bupa Great North Run to support the British Heart Foundation in 2010. She also participated in charity event She Runs LA in 2011. The main aim of the event was to support LA charity Students Run LA, which provide sports access for less privileged children.

Goulding also donated one dollar from the selling of her each copy of the mixtape with partner Pandora Radio to Free the Children charity in 2012.

She also conducted a concert in London named Gucci's global concert event in 2013 under "Chime for Change" campaign to build women awareness and to enhance their education, health, and justice. She also raised donation for Ebola crisis in West Africa in 2014.

Furthermore, Goulding also conducted and performed in charity concert Streets of London in 2014 and 2015. She is activist for homelessness and served the Marylebone Project to help end homelessness as a volunteer.

She has been actively engaged in BBC's annual charity telethon in the UK named Children in Need.

For her all good deeds and generosity, Goulding was honored by Global Leadership Award by the United Nations Foundation in October 2017.