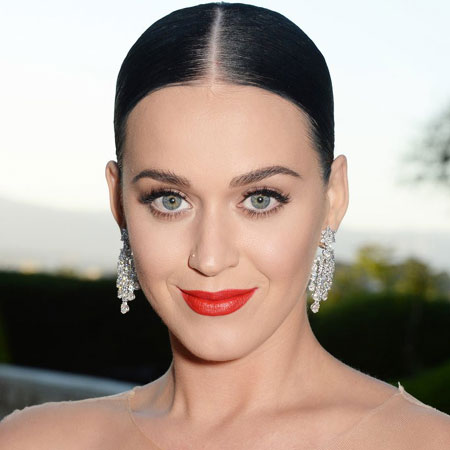 Music superstar, Katheryn Elizabeth Hudson a.k.a Katy Perry is an American singer and songwriter, well recognized for her pop hits like 'I Kissed a Girl, 'Teenage Dream,' 'Firework,' and 'Chained to the Rythm.'

Katy Perry was born on 25th October 1984 in Santa Barbara, California. She is the daughter of Mary Christine and Maurice Keith Hudson. She has a mixed ethnicity of English, Irish German, and Portuguese, and holds an American nationality.

During her childhood, Perry attended religious schools and camps including Paradise Valley Christian School and Santa Barbara Christian School in California. Her family struggled hard financially. She also has a younger brother named David, an American singer, and an older sister named Angela.

While growing up, Katy Perry and her siblings were not allowed to eat Lucky Charms as the term 'luck' reminded their mother of Lucifer, and they had to call deviled eggs 'angeled eggs'.

Looking at her sister, Perry started singing by practicing with her sister's music tapes. She used to perform the track in front of her parents, and her parents suggested she take vocal classes.

At the age of nine, Perry was interested in music and became more immense, as she began training, and was incorporated into her parents' ministry, singing in the church till she was seventeen years. She was given a guitar for the first time on her birthday and performed a song written by her, publicly.

It was the time of her freshman year of high school, Katy completed her General Education Development requirements at the age of fifteen. She left Dos Pueblos High School to achieve a musical career.

Katy has also studied Italian Opera at the Musci Academy of the West in Santa Barbara. Her singing took the attention of rock artists, Steve Thomas and Jennifer Knapp from Nashville, Tennessee, who later brought her there to develop her writing skills.

After she moved to Nashville, Perry began recording demos and learned how to write songs and play guitar. After she sang with Red Hill Records, Perry recorded her first album, a gospel record titled Katy Hudson.

The album was released on 6 March 2001 and later went on a tour, the same year as part of Phil Joel's Strangely Normal Tour. She did not get many positive responses for that album.

Later, when Perry's demos were brought up to Virgin Records chairman, Jason Flom, he was convinced that she could be a superstar and was signed to  Capitol Records in the year 2007. The label managed her to work with Dr. Luke.

Perry and Dr. Luke co-wrote the songs 'Hot n Cold' and 'I Kissed a Girl for her second album One of the Boys. They began a campaign with the 2007 November release of the video 'Ur So Gay,' focused on introducing her to the market.

Katy released her first single with Capitol, 'I Kissed a Girl,' on 28 April 2008, as the lead single from One of the Boys.  Later she became famous for her theatrically. Katy has also jumped into a larger-than-life cake and appeared in numerous wild outfits while performing.

In 2009, she appeared in her own acoustic special on MTV. The same soundtrack from the show, Katy Perry: MTV Unplugged, was released. The following year, Katy's other album, Teenage Dream was released in August 2010.

One of the singles from the album, 'California Gurls,' rose very quickly through chart #1 on the billboard. The following year, Katy released a new edition of her hit album called Teenage Dream: The Complete Confection.

The record included several new songs like 'Part of Me,' and 'Wide Awake.' Katy continued to dominate the music charts with 2013's Prism. The album 'Roar' peaked at the number one spot.

On 1st February 2015, Katy made history as the headliner at the Super Bowl XLIX halftime show, which featured special artists Lenny Kravitz and Missy Elliot and two background dancers in shark costumes that later became a viral sensation.

After two years, in Feb 2017, Katy released 'Chained to the Rythm,' the first song from her new album Witness which was released on 9 June 2017.

Katy Perry previously dated her first boyfriend Jhonny Lewis, The troubled 'Sons of Anarchy actor. They began dating in 2005. Unfortunately, Katy ended up with Johnny within a year in 2006.

After a year, she was seen dating Travie McCoy, the frontman of Gym Cla s s Heroes, who scored a solo hit with the song 'Billionaire.' Their relationship began in 2007 and decided to break up in late 2008.

After her separation from McCoy, Katy was rumored to date Josh Groban in 2009, it is still a mystery.

Later in 2010, Katy got married to Russell Brand. They had a good life as husband and wife, however, the couple began having problems and Russell filed for a divorce after being together for fourteen months in 2011.

Again, Katy was rumored to date Baptise Giabiconi in March 2012, right after a few months of Perry's divorce. Later, Katy nipped those rumors saying that she was ''single and satisfied.''

In August 2012, Katy and John Mayer, a famous singer began dating. Their affairs had several twists and turn over a year-and-a-half period. However, Perry seemed thrilled to get back in love with John Mayer, whom she called ''literally a genius.'' The couple got separated after two years of dating in Feb 2014.

Katy Perry has been in a relationship with pop singer Katy Perry. The pair, who were first seen together at the 73rd Golden Globe Awards, started dating in January 2016. They made their relationship public at the Cannes Film Festival in May 2016.

The couple split from February 2017 to April 2018. They became engaged on Valentine's Day 2019 after he popped the question with a $ 5 million worth ring.

In March 2020, the songstress confirmed her pregnancy in her new single, Never Worn White. The pair are going to marry on a spring wedding in 2020.

As one of the most popular American singer-songwriters, with numerous hit tracks including, Roar, California Gurls, Last Friday Night, Teenage Dream, Firework, and much more, Katy Perry earns an enormous amount of money.

She has also won several awards for her hard work. As for 2022, she has a whopping net worth of $330 million. As for her salary, Perry earns $25 million per year.

She has a luxurious mansion in Beverly Hills, California which she bought for $19 million. The house consists of 5 bedrooms and 5 bathrooms.