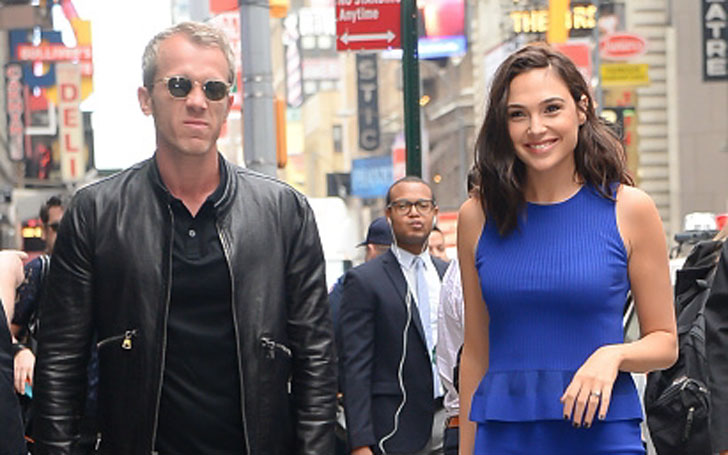 They say, "Behind every successful man there is a woman." But in the case of Wonder Woman, Gal Gadot it's completely opposite.

Gadot who shot for Wonder Woman when she was five months pregnant is the inspiring icon for all women right now. It has come to light that Wonder Woman's loving and supportive husband, Yaron Varsano is her inspiration! Let's find more about Gal Gadot and Yaron Varsano.

Thirty-eight years old Yaron Varsano is a supportive husband. In his recent Instagram post, he praised his superhero wife, Godot by wearing a t-shirt that writes “Your Wife / My Wife” showing his wife to be the Wonder Woman, which she is! He captioned the lovely picture:

Well, this proves Yaron Varsano is the number one fan of Wonder Woman, Gal Gadot.

The former Miss Israel said "he's the best man" in an interview with Glamour talking about her husband,  Varsano.

Gal Gadot and Yaron Varsano with their daughter, Alma

" I wouldn't be able to do what I do without him."

She also shared with Glamour how Varsano inspired her for being the role model. She explained:

" I’ve gotten better. When Alma was around two, I was really anxious about how to travel with a child, moving her from one country to the other, all the different languages. It was my husband who told me: "Gal, think about what kind of a role model you want to be. If you want to show Alma that she can follow her dreams, that’s what you should do, and we will figure out the logistics."

She several times mentioned how supportive her husband is when it comes to her career. She even said Varsano the "amazing husband, very much woman-friendly." Therefore, we can undoubtedly say that the two are pretty much happy with each other and spending a considerable blissful married life for a long time now.

we recommended you, Wonder Woman Gal Gadot Is Happy Despite Being Paid Very Low. Know How Much the Movie Made.

Thirty-two years old Gadot and her husband Varsano had their first encounter through a mutual friend at a dessert party in Israel. On their second date, Varsano shared asked her out. After dating for about two years Varsano purposed Gadot for marriage.

GalThe couple met for the first time on a retreat in the Israeli desert in 2006. The couple instantly clicked and after some time, they started dating.

The couple got married in 2008, in a private wedding ceremony. The couple is blessed with two daughters: Alma who was born in 2011 and Maya who was born in March 2017. Gal Gadot also helped her husband in running his five-star hotel as well.

This is simply the cutest couple in Hollywood right, I mean Beyonce and Jay-z had twins and all recently, but I am still shipping these two harder!

Furthermore, her husband Yaron Varsano has an estimated net worth of around $26 million according to some sources, however, he has not officially revealed the exact numerals.