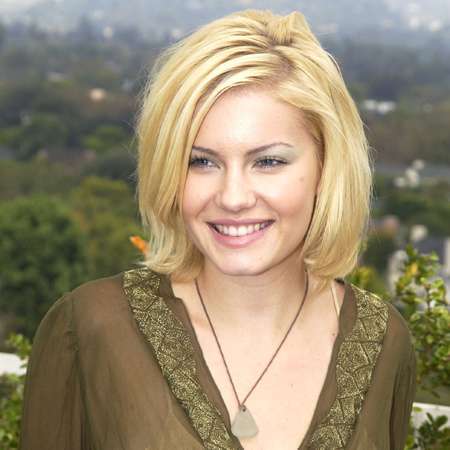 Elisha Ann Cuthbert, a Canadian actress as well as a model, is famous for portraying Kim Bauer in the series 24. She has appeared in numerous films and TV series including House of Wax, Lucky Girl, Family Guy, and Just Before I Go.

Cuthbert began modeling when she was nine and started endorsing children’s clothing line in 1994. She made her television debut through the horror-themed children series, Are You Afraid of the Dark?

Since 2016, she is portraying Abby in the Netflix comedy series The Ranch. In 2001, she won Gemini Awards for her outstanding performance in a leading role in a dramatic program or mini-series Lucky Girl.

Regarding her personal life, she is married to her boyfriend, Dion Phaneuf with whom she shares a child.

Cuthbert is the daughter of Patricia Cuthbert and Kevin Cuthbert. Her mother is a housewife whereas her father is an automotive design engineer. Her parents raised her with her siblings, a sister Lee-Ann Cuthbert and a brother Jonathan Cuthbert in Greenfield Park, Quebec.

Cuthbert used to live in Toronto, Ontario before moving to Los Angeles at the age of 17 to pursue a career in acting. She graduated from Centennial Regional High School in 2002. During the very early time, she modeled for children's clothing and also became a foot model.

Elisha Cuthbert made her movie debut as a child artist in 1997 in the movie Dancing on the Moon. She then continued to appear in Canadian movies until the early 2000s. Afterward, she moved to Hollywood and worked in several movies and TV series.

In 2003, she worked as Darcie Goldberg in a comedy film, Old School. Her performance in the movie was highly appreciated.  The same year, she worked in a movie, Love Actually for which she has been nominated for several awards and won some of them as well.

Her major Hollywood breakthrough came in 2004 when she featured in The Girl Next Door. In the movie, she played ex-adult-movie star Danielle. The movie starred Emile Hirsch, Yomothy Olypathy, and Chris Marquette. Though the movie did not hit the box office, she earned huge popularity.

In 2005, she appeared in a remake of House of Wax opposite Paris Hilton. Her latest film was Goon: Last of the Enforcers which was released in 2017 directed by Jay Baruchel.

In 1997, Cuthbert appeared as a child host for a Canadian TV show, Popular Mechanics for Kids. At the age of 17, she earned her breakout role as Megan (a rich kid) in the Nickelodeon horror-fantasy TV series, Are You Afraid of the Dark? starring Ross Hull and Jodie Resther.

Cuthbert made her TV  breakthrough as Kim Bauer (daughter of Jack Bauer, the main character) in the Fox network's series 24 where she worked with Kiefer Sutherland, Mary Lynn Rajskub, and Carlos Bernard.  She was a s sociated in the series from 2001 to 2010 appearing in 79 episodes as a lead role. Her performance was highly appreciated and has been also nominated for several awards.

Since 2016, she has been appearing in the Netflix series The Ranch alongside Ashton Kutcher, Sam Elliott, Debra Winger, and other stars. Cuthbert also reprised her role in the 2006 video game adaptation which was poorly received by critics but was nominated for a BAFTA for its script.

Moreover, she was also featured in several music videos like Weezer's Perfect Situation, Paris Hilton's Nothing in This World, and Make Our Own Way.

Besides, She was listed as the Most beautiful woman on American TV in the year2013 within the magazine named Glam’Mag.

Elisha Cuthbert has been nominated for several prestigious awards and won some of them as well. Some of her nominated awards include:

Elisha Cuthbert's Net Worth And Properties

Elisha Cuthbert has an estimated net worth is $20 million. She has ama s sed a hefty amount of net worth from her acting career. Her several films have made a huge amount at the Box Office. Some of those movies include:

Regarding her Ice Hockey player husband's net worth, his total earning and a s sets include $4 million. His estimated salary is $2 million for the current season 2017-18 at the Los Angeles Kings.

Cuthbert is a married woman. She is married to her boyfriend, ice hockey player Dion Phaneuf since 2013. The duo had an affair for a few years and engaged with each other in September 2012. The couple tied the knot on 6 July 2013 at St. James Catholic Church in Summerfield, Prince Edward Island.

Her husband is a Canadian Ice hockey defenseman who plays for the Los Angeles Kings of the National Hockey League (NHL). He is formerly played for the Calgary Flames, Toronto Maple Leafs, and Ottawa Senators.

On December 21, 2017, she welcomed her first child Zaphire with her husband Dion Phaneuf. The family resides in Ottawa during her husband's hockey season and use to spend their summers at her husband's waterfront in New London.