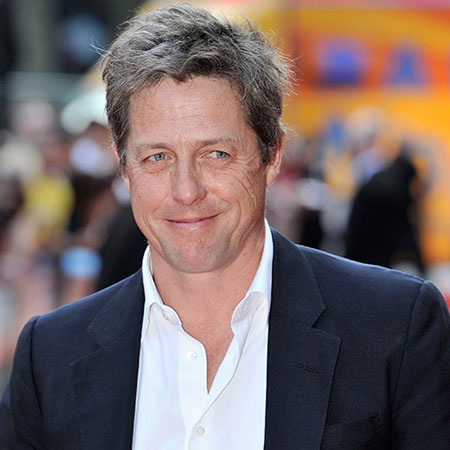 Hugh Grant is an English actor and film producer most known for having a strong work ethic and has appeared in the Richard Cruits scripted, Four Weddings and a Funeral. He received Chicago Film Critics Awards, Golden Globe Awards and British Academy Awards for his best performance.

The talented actor was born on 9 September 1960 in London, England. He holds an English nationality and belongs to Caucasian ethnicity. His parents were James Grant and Finvola Grant. His father was trained at Sandhurst and worked with Seaforth Highlanders for eight years in Germany, Malaya, and Scotland.

Grant's mother worked as a school teacher and taught him, French, Latin, and music for more than 30 years in the State schools of West London. When his mother was 65 years old, she died due to pancreatic cancer. He joined Hogarth Primary School in Hammersmith and then attended Wetherby School. Furthermore, he attended Latymer Upper school and Oxford University Dramatic Society.

The artistic actor first acted in the Merchant-Ivory’s Edwardian drama titled Maurice. He balanced small roles on television with small film works including The Dawning opposite Anthony Hopkins and Jean Simmons.

In 1990, he made a cameo appearance in The Big Man, which explores the life of a Scottish Miner (Neeson), who becomes unemployed during the union strike, opposite Liam Neeson. He appeared in Roman Polanski’s film Bitter Moon and also worked in period pieces such as Ken Russell’s horror film, The Liar of the White Worm, Merchant-Ivory drama, The Remains of the Day and Impromptu.

Moreover, he acted in Four Weddings and a Funeral and signed a two-year production deal with Castle Rock Entertainment and became the founder and director of the UK-based Simian Films Limited. He played a leading role as Emma Thompson’s suitor in Ang Lee’s Academy Award-winning adaptation of Jane Austen’s Sense and Sensibility. In the same year, he appears in Restoration which earned an Academy Award.

Grant reunited with the director Mike Newell, for the tragicomedy An Awfully Big Adventure a determinedly off-beat film by The New York Times. He made his debut as a film producer with the movie Extreme Measures and then paired with Julia Roberts in Notting Hill where the members of Four Weddings and a Funeral were involved.

In 2004, he reprised his role as Daniel Claver in a small part in Bridget Jones: The Edge of Reason and reteamed with Paul Weitz for the Black comedy, American Dreamz. He is also a patron of the DIPEx Charity, which operates the website Healthtalkonline, Fynvola Foundation and supports the Lady Dane Farmhouse, a home in Faversham for adults with learning disabilities. He has worked as a fundraiser and ambassador for Marie Curie Cancer Care promoting the charity’s annual Great Daffodil appeal on numerous occasions and is also a patron of Pancreatic Cancer Action.

The proficient actor met an actress Elizabeth Hurley, who was cast in the supporting role as Byron’s former lover, Claire Clairmont. He then began dating Hurley during the filming days. They were together for thirteen years and were separated in May 2000. He is the godfather to her son Damian who was born in 2001.

Grant had a daughter named Tabitha with Tinglan Hong, a receptionist at the Chinese restaurant in London. He had a fleeting affair and Hong was badly treated by the media, the press intrusion which prevented him from attending the birth of the daughter and was not allowed to meet Hong.

Grant then had a relationship with a Swedish television producer Anna Eberstein and had a second child named Mungo Grant. He again re united with Hong and had his third child with Hong named  Felix Grant. In 2015, he again had his fourth child with Eberstein.

The popular actor is living a luxurious life. His net worth is estimated as $80 million. His most popular movies Star Wars: Episode II  was able to earn $129 million globally. His movie Four Wedding and a Funeral became the highest grossing British film to date with a worldwide box office in excess of $244 million, which made Grant an overnight international star.