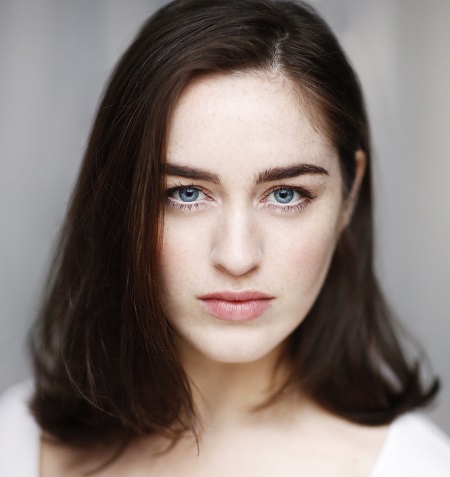 Danielle Galligan is a rising Irish actress, theatre-maker, and poet who started her professional career in 2015. Within a short period of time, the actress has won the hearts of thousands and has appeared in a dozen of television series and films. She is now all set to appear in the television series Shadow and Bone that will be released in April this year.

Danielle was born on 1st December 1992 and is currently 28 years old. She was born in Rathfarnham, Ireland, and belongs to Irish nationality. She was raised as Catholic but now considers herself an agnostic.

The name of her father is Tom Galligan. Her mother, Lorraine, is a beauty therapist. Her mother runs a salon and beauty school named Galligan Beauty.

Danielle studied at Loreto High School Beaufort and attended Trinity College Dublin to study Drama and Theatre. Likewise, she trained at The Lir Academy and graduated with a Bachelor’s Degree in 2015.

Danielle is 5 feet 6 inches tall and weighs around 54 kg. She has blue eyes and brown hair.

The 28 years old started her acting journey in 2015 as Bella in the stage production The Train. The following year, she appeared in Hostel 16.

Her stage performances include in Cascando, Beyond Barricades, All Honey, Kiss Kiss Slap, Summertime, Lyrics, The Grimm Tale of Cinderella, We Can’t Have Monkeys in the House, The Heiress, The Payboy Riot!, Gym Swim Party, MorphMe, Nothing But A Toerag, 12 Christmas Poems, and many others.

Danielle made a big-screen debut in 2016, portraying the role of the wretched girl in the short movie Closing Time. The following year, she appeared as Aisling in the short movie, Strangers in the Park, which she also co-wrote.

Since then, Danielle has appeared in movies like Pernicio, Tomorrow, Beautiful Youth, Break Us, Tomorrow, and so on. Her films We Don’t Choose How and Lily are in the post-production stage.

Regarding her television career, she made television debut in 2019, appearing as Sarra in the famous television series Game of Thrones. Likewise, she appeared in Krypton and Cold Courage.

Besides this, she also appeared in music videos of DAVIIS’ You and Me and Yellow Season’ Can You Feel It.

Though it has only been six years since Danielle started her professional career, she has already worked in around a dozen of films and television series. She also worked in music videos.

As of 2021, Danielle Galligan’s net worth is reported to be around $2 million. She earns around $50 thousand per annum as an actress.

What Is Her Current Relationship Status? Who Is She Dating?

Danielle has not openly talked about her personal life, including her current relationship status. Moreover, she is not linked with anyone. 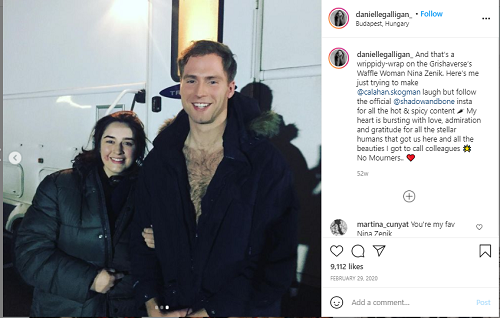 However, while surfing around her Instagram, we can see numerous of her pictures with her co-star, Calahan Skogman. She started posting pictures of Calahan in Feb 2020.

On the other side, Calahan has also uploaded pictures with her on his Instagram. But, it is not clear if the duo is dating or are just good friends.