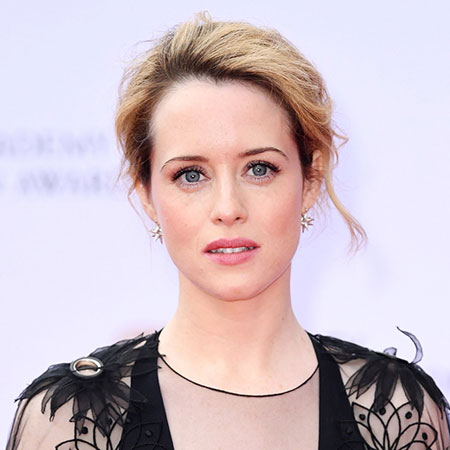 Most popular for her Golden Globe Award-winning character Queen Elizabeth II, in the Netflix series The Crown, Claire Foy is one of the prominent faces in the field of acting. She is also known for her role Anne Boleyn in BBC2's Wolf Hall, for which she was nominated for Critics' Choice Television Award for Best Supporting Actress in a Movie/Miniseries and British Academy Television Award for Best Actress.  Foy also worked on several other popular television shows including Being Human (2008), BBC dramas The Night Watch (2011), and Wolf Hall (2015). Besides, she also featured in numerous successful movies like Season of the Witch, Rosewater, and Unsane.

Claire Foy was born Claire Elizabeth Foy on April 16, 1984, in Stockport, Greater Manchester, England. She spent most of her childhood days growing up in Stockport as the youngest of three children born to Caroline Foy and David Foy. She holds British nationality and regarding her ethnicity, she is from the mixed ethnical background as she has Irish ancestry on her mother's side.

Foy moved to Longwick, Buckinghamshire with her family due to her father’s profession as a salesman on Rank Xerox but her parents divorced when she was eight and she started living with her mother.

She attended a girl’s grammar school Aylesbury High School until she reached 12. And then went on to study drama and screen at Liverpool John Moores University. She also took acting training for a year at the Oxford School of Drama. After completing her graduation in 2007, Foy moved to Peckham and shared the house with her five drama school’s friends.

Claire Foy started her acting career appearing in various plays like Top Girls, Watership Down, Easy Virtue, and Touched. She made her professional stage debut in DNA and The Miracle at the Royal National Theatre in London.

Foy's first television role came in 2008 when she played the role of Julia Beckett in a 2008 supernatural comedy-drama television series Being Human. She later portrayed the protagonist Amy Dorrit in BBC mini-series Little Dorrit and got a nomination for an RTS Award.

Foy also appeared in two episodes of Terry Pratchett's Going Postal, in 2010. By the same year, she featured in the BBC revival of Upstairs Downstairs. She portrayed Lady Persephone in nine episodes of the series. Her other TV work includes The Promise, White Heat, Crossbones, and Wolf Hall.

Her career reached a new height in 2016 when she got a chance to play the major character of the young Queen Elizabeth II in Peter Morgan's Netflix biographical drama series The Crown. She shared the screen with Matt Smith, Eileen Atkins, and Ben Miles.

For her brilliant performance in the series, Foy won a number of the prestigious awards including Golden Globe Award for Best Actress. She also made an appearance in TV films, including Pulse, The Night Watch, and Frankenstein and the Vampyre: A Dark and Stormy Night.

Here is the list of her all-time hit TV series

Claire Foy made her silver screen debut portraying Anna in a 2011 American historical fantasy adventure film Season of the Witch. In 2014, she appeared in two movies Vampire Academy and Rosewater.

The following year, Foy portrayed the role Lois in comedy-drama film The Lady in the Van which became the instant hit at the box office grossing over $41.4 million worldwide at the box office against its producing cost of just $6 million.

As of 2018, she is appearing alongside Ryan Gosling, Corey Stoll, and Kyle Chandler in the most anticipated movie First Man. She is also filming The Girl in the Spider's Web.

Along with Foy’s extensive career that spanned over a decade, she has received numerous awards and nominations. Her mind-blowing performance in the all-time hit TV series The Crown earned her a number of accolades including Golden Globe Award for Best Actress and Screen Actors Guild Awards.

CAPTION: Claire Foy is known for her role in The Crown SOURCE: Good Housekeeping

Foy was also nominated for the BAFTA TV Award for Best Actress and a Primetime Emmy Award for her iconic role in the series.

She also gained a widespread popularity for her performance in a 2015 miniseries Wolf Hall which landed Foy her first BAFTA TV Award nomination. She also got a nomination for Gold Derby Award for the Best Supporting Actress in a Limited Series.

Foy has earned a considerable amount of money from her acting career which is around $4 million, according to Celebrity Net Worth, in 2018.

According to a report in Variety, Foy was paid around $40,000 per episode for her significant role in the prominent and highly rated TV series The Crown.

Some of her box office hit movies are

Claire Foy was married to actor Stephen Campbell Moore in December 2014. Foy and her former husband Moore first met on the set of Season of the Witch in 2011. The couple started dating in late 2011 and eventually got married in 2014 in an intimate ceremony.

The couple welcomed their first child, a daughter Ivy Rose Moore, in March 2015. Together they attended the House Of Fraser British Academy Television Awards 2016 at the Royal Festival Hall on May 8, 2016, in London.

Unfortunately, the two made a public announcement regarding their separation stating “We have separated and have been for some time” in February 2018. Their divorce is yet to be finalized.

Foy Is a lifelong avid fan of Bruce Springsteen.