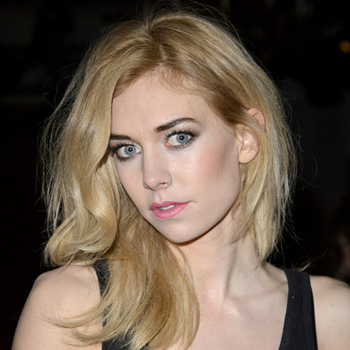 The English stage and TV film actress, Vanessa Kirby is well known to viewers as character Estella in the BBC adaptation of Great Expectation and as character Joanna in About Time. This British beauty has charmed her way through acting with her blonde hair and pretty face.

Vanessa has also been seen in many theater acts. She was nominated for the Evening Standard Theater Awards as Outstanding Newcomer for her performance in the Acid Test. Her viewers as well as critics see Vanessa as a promising future star and want to see more of her. Vanessa was also enlisted as one of the Nylon magazine’s Young Hollywood list of 2012.

Vanessa Kirby was born in Wimbledon in the capital city, London in England on April 18, 1988, under the birth sign Aries. She possesses British nationality and English ethnicity. She was born to parents, who were the urologist and the founder of Country Living magazine. There is no information on her siblings.

Born and raised in Wimbledon, London, Vanessa Kirby’s father was a prostate Surgeon and her mother was the founder of Country Living. Vanessa was turned down by Bristol Old Vic Theater School so she took a year’s gap traveling and finally settled down to studying English at Exeter University.

Vanessa was later signed up to an agency where she met the director, David Thacker. David later gave Vanessa three starring roles at the Octagon Theater Bolton.

In 2010, she acted as character Ann Deever in All My Sons by Arthur Miller then she did the role of Regina in Ghost by Henrik Ibsen and finally the role of Helena in A Midsummer Night’s Dream by William Shakespeare.

For her exceptional performance, Vanessa won the BIZA Rising Star Award at the Manchester Evening News Theater Awards, worth pound 5000. With that, all her Octagon Theater Bolton acts were over. Vanessa then went on to star in Women Beware Women by Thomas Middleton as character Isabella at the National Theatre. Vanessa acted alongside actor Harriet Walter and Harry Melling.

In the year 2010, Vanessa again went to star in William Shakespeare’s As You Like It as character Rosalind at the West Yorkshire Playhouse in Leeds. In 2011, Vanessa played the role of Dana in The Acid Test by Anya Reiss at the Royal Court Theatre. By then Vanessa was liked by all, her true talent for acting was recognized and complimented by many.

Thus in 2011, Vanessa was named as one of the Screen International’s ‘Stars of Tomorrow’. In the same year, Vanessa was nominated for the Evening Standard Theatre Awards as Outstanding Newcomer for her performance in The Acid Test.

Thus, Vanessa had not only proved to be loved by her viewers but also by critics. Even after entering in television, Vanessa did not stop her theatre work. In 2012, she played the role of Masha in Three Sisters by Anton Chekhov at the Young Vic.

Then a year after, Vanessa was seen as character Isabella in ‘Edward II’, written by Christopher Marlowe, at the National Theatre. Vanessa’s Theatre journey was exceptional, she was even nominated in 2010, 2011(came third) and 2013 for Ian Charleson Award.

Vanessa Kirby made her debut in television with BBC’s The Hour. Vanessa was seen as character Ruth Elms in episodes 2 and 4. Then on the same year, she appeared in the BBC’s adaptation of Great Expectations as character Estella, which was broadcasted from 27 to 29 December, alongside Ray Winstone, Gillian Anderson and her soon to be boyfriend Douglas Booth.

Then in 2012, Vanessa Kirby was seen as the lead role, Alice Tanner in Ridley Scott’s miniseries adaptation of Kate Mosses’ novel Labyrinth which was broadcasted from 30-31 March 2013. In the same year, Vanessa filmed The Rise which premiered at the Toronto and London Film Festivals and won the Best Debut Category for Director Rowan Athale.

In the same year, Vanessa filmed the yet to be released Kill Commander as character Mills. Then in 2014, Vanessa was seen in the British drama film, Queen, and Country directed by John Boorman. Vanessa has been filming in an upcoming epic space opera film Jupiter Ascending. Vanessa Kirby will also be seen in the 2015 American 3D adventure thriller film, Everest.

The actress Vanessa is living a luxurious life from her successful career. From her appearance in the movies and television series, she is earning a decent amount of money.

As per the multiple sources, she has an incredible net worth of $4 million.

Vanessa stands tall at the height of 5 feet and 7 inches, weighs 56 K.G and looks stunning in an hourgla s s-shaped figure with body measurements, 32-24-33. Kirby’s nickname is Noola Noo.V Vanessa is currently aged 25.

Vanessa’s dating history is not so long, with only two men involved to date. Vanessa dated co-actor Christian Cooke from 2009 to 2012, whom she met on the sets of Romeo and Juliet. Then Vanessa dated Great-expectation’s co-actor, Douglas John Booth who is four years younger to her.

They began dating in June 2012 when they met on the set of Great Expectation. Douglas wanted to keep the relationship away from the media thus he even deleted his twitter account and finally in 2013, the couple separated.

The film industry has much more in store for Vanessa Kirby and with the upcoming films, it is sure that Vanessa will live up to the expectations of her viewers.