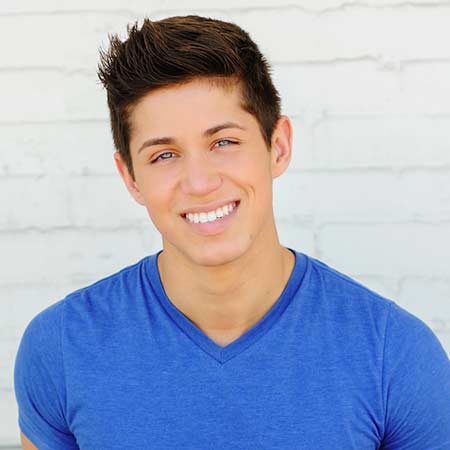 Brandon Larracuente is an aspiring American actor who is well recognized for his role, Ben Rayburn in Netflix’s series, Bloodline. Larracuente is also famous for his role, Jeff Atkins in another Netflix series, 13 Reasons Why. Some of his other works include Max Steel, Baywatch, and Bright.

Brandon Larracuente was born on 16th November 1994 in Pleasantville, New York under the birth sign Scorpio. Larracuente is American by nationality and belongs to White ethnicity. His parents are New York, police officers.

From the early age of 4, Larracuente started acting in the theater after being asked to be a part of two operas at the New Rochelle Opera House. At the age of 8, he performed in an Off-Broadway show, Desire. Later, he moved to Florida to pursue a career in acting. There he performed in Charlie and the Chocolate Factory and Its Wonderful Life at the Orlando Repertory Theatre.

Brandon Larracuente made his Hollywood debut in 2013 from the A&E network’s crime drama TV series, The Glades. The following year, he worked in an episode of Every Witch Way and Constantine.

In 2015, he appeared as Ben Rayburn in Netflix's original thriller-drama web series, Bloodline. He was a s sociated with the series from 2015-2017 appearing in 18 episodes. The series starred Kyle Chandler, Ben Mendelsohn, Linda Cardellini, and Sissy Spacek.

In 2017, Larracuente worked as Jeff Atkin in popular Netflix’s mystery teen drama web series, 13 Reasons Why with Katherine Langford, Dylan Minnette, Alisha Boe, Christian Navarro, and Justin Prentice. In the series, his character was a student at Liberty High and a friend of Clay Jensen (Dylan Minnette) who died in the first season of the show. His acting in the series was praised by a number of audiences.

CAPTION: Brandon Larracuente in one of the scenes of 13 Reasons Why. SOURCE: NY Daily News

Initially, he gave a tape- audition for Justin Foley in the series. After a long process, the makers offered them the role of Jeff.

The following year, he worked as a skateboarder in action comedy film, Baywatch by Seth Gordon. The same year he shared the screen with Will Smith, Joel Edgerton, Noomi Rapace, and Lucy Fry in the urban fantasy crime film, Bright.

Brandon Larracuente has earned an impressive amount of money from his acting career. As of 2018, his net worth is estimated to be 6-digit-number, but, the amount is still under review. He has collected al of his income from an appearance in several movies and Tv shows. His movie Max Steel collected   $3,818,664 in the box office. Some of his movies works and its box office collection is listed below.

13 Reasons Why actor, Brandon Larracuente is dating a blogger and an Instagrammer, Jazmin Garcia. The couple posts several intimate and cozy pictures together on their social media. Their social media posts show that the pair loves to travel together. Larracuente also appears in several YouTube videos of his girlfriend.

Every moment spent with you is a moment I treasure

A post shared by Brandon Larracuente (@brandonlarracuente) on Oct 3, 2016 at 5:07pm PDT

Larracuente is a fitness freak and spends most of his spare time in the gym. Besides, he is an animal lover. He has a dog named, Nala to whom he recused from an undisclosed place.

Here is the video where Brandon Larracuente talks about his audition for Jeff in 13 Reasons Why: