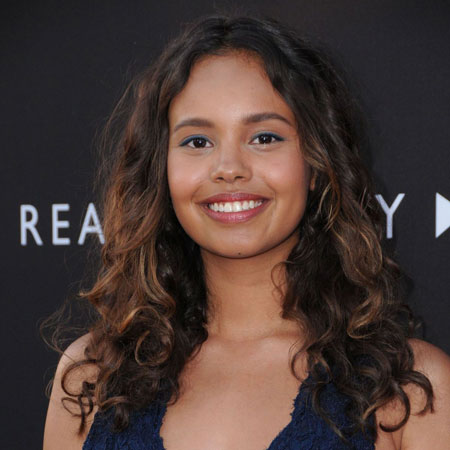 Norwegian-Somali actress, Alisha Boe is popularly known for her roles, Jessica Davis in the Netflix TV series, 13 Reasons Why. Boe made her Hollywood debut in 2008 from an anthology horror film, Amusement and following that she has appeared in many movies and TV series including 68 Kills, Paranormal Activity 4, Plastic Makes Perfect!, NCIS, Extant, Modern Family and Teen Wolf among others.

Alisha Boe was born Alisha Ilhaan Bo on 6th March 1997 in Oslo, Norway under the birth sign Pisces. Boe holds both American and Norwegian nationality and belongs to Mixed ethnicity (Somalian and Norwegian). When Boe was young, her parents divorced. Later, she moved to LA with her mom as she married an American man.

Boe joined two middle schools, George Ellery Hale Middle School and Ivy Academia. She also went to El Camino Real High School where she enrolled in the drama program. Later, she dropped out of high school to pursue her career in music.

Alisha Boe made her Hollywood debut in 2008 from an anthology horror movie, Amusement alongside Katheryn Winnick, Jessica Lucas, Laura Breckenridge, Reid Scott, and Kevin Gage among others. The following year, Boe appeared in a romantic/comedy film, He’s on My Mind by Kazeem Montlake.

Boe then appeared in Paranormal Activity 4 and Plastic Makes Perfect!. Her latest work is 2017's, 68 Kill where she shared the screen with AnnaLynne McCord, Matthew Gray Gubler, Sheila Vand, and Lucy Faust among others.

In 2013, Alisha Boe debuted on TV from Trophy Wife followed by appearances in hit series like Modern Family, Extant, Ray Donovan, NCIS and Casual among others. Among all her work, she is popularly known for her roles in the TV series, 13 Reasons Why (2017). She appeared in the series with Katherine Langford, Dylan Minnette, Brandon Flynn, Christian Navarro, and Miles Heizer among others.

Alisha Boe has accumulated an estimated net worth close to a six-digit figure, but the exact amount is not made public.

Her primary source of income is acting. Boe’s movie, Paranormal Activity 4 (2012) collected $142.8 million, made with the budget of $5 million. The movie is rated 4.6 stars by IMDb.

Also, 13 Reasons Why where she appeared as one of the leads is rated 8.3 by IMDb and TV.com.

Alisha Boe is yet to be married. She is possibly single as she has not introduced anyone as her boyfriend or given any hints of being in a relationship. She has given much time to her acting career which is probably the major reason for staying single.

Alisha Boe got a matching tattoo with Tommy Dorfan (co-star) and 13 Reason’s Why executive producer, Selena Gomez. They inked a semicolon on their arms which symbolizes, ‘’this is not the end, but a new beginning.’’

Below, the video shows some 10 facts about Alisha Boe: