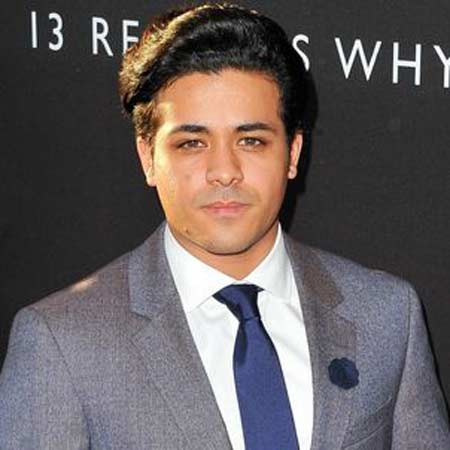 Christian Navarro is an American rising actor, who is well-recognized for his role as Tony Padilla on Netflix’s TV series, 13 Reasons Why. In 2005, he made his Hollywood debut as The Infected from the movie, Day of the Dead 2: Contagium. He also worked in several TV series like Law & Order: Criminal Intent, Blue Bloods, The Affairs and Vinyl among others.

Christian Navarro was born Christian Lee Navarro on 21st August 1991 in Bronx, New York under the birth sign Leo. Navarro is American as per nationality and ethnicity-wise, he is of Puerto Rican descent. He has a sister, C. Leeann Navarro.

Christian Navarro made movie debut in 2005 from the horror film, Day of the Dead 2: Contagium. In 2009, he appeared as John White in the movie, Run It. He then starred in action thriller film, Bushwick alongside Dave Bautista, Brittany Show, Angelic Zambrana and Arturo Castro.

As of 2018, Navarro is working in biographical drama thriller film, Can You Ever Forgive Me? directed by Marielle Heller.

#tbt Throwing it back to an incredible week earlier in the year. I had the privilege of premiering @canyoueverforgiveme at @tiff_net and later that week at the SD Film Festival accepted “The Rising Star” award for my work on @hbo @vinyl and @13reasonswhy. Later that week I travelled to Colombia to represent the AmericanLatino wing of @netflix Latin American Market. My life has changed so much in the last three years and I haven’t taken any of it for granted. Love you all.

In 2007, Navarro made his TV debut as Paco Mendoza in police procedural TV drama series, Law & Order: Criminal Intent.  Furthermore, he starred in the series with Vincent D’Onofrio, Kathryn Erbe, Leslie Hendrix, and Eric Bogosian. He then worked in several TV series, Blue Bloods, Taxi Brooklyn, The Affair and Rosewood.

Since 2017, Navarro is working in the Netflix’s mystery teen drama web TV series, 13 Reasons Why. He shared the screen with Katherine Langford, Dylan Minnette, Alisha Boe, and Brandon Flynn.

Christian Navarro has an estimated net worth of $2 million. Navarro earns a salary of $35k per episode from the TV series, 13 Reasons Why.

As per some online sources, a TV star averagely earns between $150k to $1 million.

Christian Navarro, the talented and handsome actor, is a private person. He is yet to be married. Navarro prefers to keep his love affairs under wraps. He was rumored that he was secretly dating a Pakistani lady named, Shazi Raja. However, the couple has not confirmed their relationship. So, as per the available information about his love life, he is possibly single in the present days.

Navarro is close with the casts of 13 Reasons Why but especially with Brandon Flynn. He has a tattoo of a lion in his hand. His hobbies are playing guitar and traveling.

The actor is also quite popular on social media. He has amassed a tremendous fan following on his Instagram account with over 4 million as of November 2018. He is also a dog person has a great attachment to the animal. His pet dog's name is Dani with whom he frequently posts a photo on his Instagram.

Here are some facts about Christian Navarro: