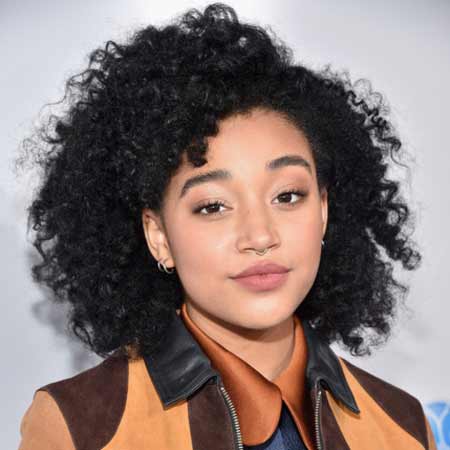 Teen Choice Award-winning actress and singer, Amandla Stenberg is well recognized for portraying the role of Rue in the movie, The Hunger Games. She is also popular for her role Madeline Whittier in the romantic drama movie, Everything Everything. As of 2018, she will be appearing in movies, such as The Darkest Minds, Where Hands Touch and The Hate U Give. Before building her career as an actress, she used to work in commercials and catalog advertisements for McDonalds, and Disney.

Stenberg is American as per nationality and ethnicity-wise,  she is Mixed (African-American and Greenlandic Inuit ancestry). She is the daughter of African American mother, Karen Brailsford and Danish father, Tom Stenberg.'

Stenberg has two older half-sisters from her father’s past relationship. She attended Wildwood School. In 2016, she announced that she would be attending New York University via her Instagram.

At the age of four, Amandla Stenberg started her career as a model. She did catalog modeling shoots for Disney. Stenberg also appeared in several commercials and catalog advertisements for Kmart, and McDonalds.

Stenberg made her big screen debut in 2011 as Young Cataleya from French action thriller movie, Colombiana directed by Olivier Megaton. Her breakthrough came in 2012 as Rue in the science fiction action-adventure film, The Hunger Games by Gary Ross. Her acting in the movie was highly appreciated by fans and critics. Her acting in the movie helped her to win Teen Choice Awards and nominations for Black Reel Award and NAACP Image Award.

In 2014, Stenberg voiced Bia in 3D computer-animated musical comedy film, Rio 2. Stenberg worked as Sarah in the drama film, As You Are in 2016 with Owen Campbell and Charlie Heaton. The same year, she appeared as herself on Beyonce’s visual album Lemonade. She won BET Award for her performance in the music video. In 2017, she worked in the movie, Everything Everything.

CAPTION: Amandla in one of the scenes of Everything Everything. SOURCE: Instagram

As of 2018, she will be appearing in The Darkest Minds, Where Hands Touch and The Hate U Give.

Stenberg made her TV debut in 2012 from A Taste of Romance. The following year, she worked as Macey Irving in Sleepy Hollow with Tom Mison, Nicole Beharie, Lynda Greenwood and Orlando Jones. In 2015, she appeared in NBC’s sitcom, Mr. Robinson with Craig Robinson, Peri Gilpin, Ben Koldyke and Spencer Grammer.

Stenberg also plays violin, drums, and guitar and in 2014, started performing on the violin and singing harmonies at LA venues with singer Zander Hawley.  The duo is known as Honeywater and released their first EP in 2015 and second in 2016. Her cover of Mac DeMarco’s Let My Baby Star was featured as Everything, Everything's soundtrack.

In 2015, she co-wrote a comic book Niobe: She Is Life along with her friend, Sebastian Jones. In 2017 the second part of the book, Niobe: She is Death was released.

Amandla Stenberg has an estimated net worth of $1 million. Stenberg worked in several movies which made a good collection at the box office.
Here is the list of her hit movies:

She earns a good amount from her comic books, Niobe: She Is Life priced $19.99. In 2016, she featured on the cover of Teen Vogue America. She became the ambassador for No Kid Hungry. She also supports the Ubuntu Education Fund.

Amandla Stenberg, the young and talented actress, is assumed to be single. In 2015, Stenberg was rumored to be dating American actor and rapper, Jaden Smith. The couple were spotted at several places and even attended prom together. But after few months, Smith was spotted with model Kylie Jenner which started a fight between the two ladies. Jenner even commented on Stenberg’s hairstyle whereas, Stenberg spoke about cultural appropriation publically.

Later, Amandla confirmed that she and Smith were just good friends and nothing more than that. Moreover, she was also linked to her Everything Everything co-star, Nick Robinson.

In 2016, Stenberg uploaded a Snap chat video where she called herself a bisexual black woman. She told,

''It's a really, really hard thing to be silenced and it's deeply bruising to fight against your identity and to mold yourselves into shapes that you just shouldn't be in."

"As someone who identifies as a black bisexual woman, I've been through it and it hurts and it's awkward and it's uncomfortable.''

The same year, she also passed a statement on her sexuality, while interviewing for Elle,

''Bisexual is a word I am not too attached to ... it implies a dichotomy that doesn't take into account trans people. So maybe pansexual is more accurate for me."

Furthermore, she also addresses herself as an intersectional feminist. In 2015, she was listed in the 30th Most Influential Teens by Teen Vogue. The following year, Ms. Foundation for Women named her as Feminist of the Year for her strong political views on social media and interviews.

Here is the video, where she is talking about her sexuality: