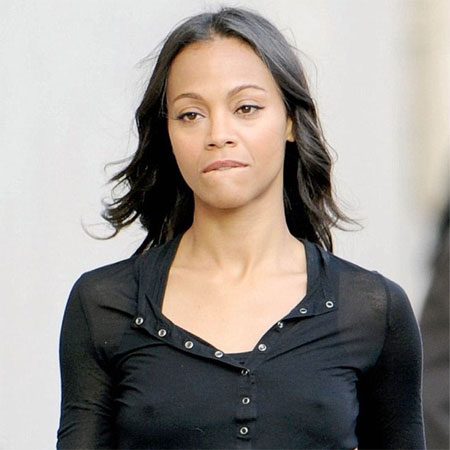 Zoe Saldana is beautiful actress and dancer. She first appeared on the screen in an episode of an American legal drama, Law&Order. She is best recognized for her portrayal as Gamora in the Marvel Cinematic Universe, starting with Guardians of the Galaxy.

Zoe Saldana was born in Passaic, New Jersey, June 19, 1978. Her ethnicity/race comes from a mixed heritage where her mother was  Puerto Rican named Asalia Nazario and her father Aridio Saldana, who was from the Dominican Republic.

She grew up in Queens, New York. Lost her father at  9, in a car accident, her mother then moved Saldana and her two sisters to the Dominican Republic to her grandparents.

Saldana studied varieties of dance forms at ECOS Espacio de Danza  Academy where her favorite was  Ballet dance. At 17, she moved back to New York and continued dancing. Then she joined FACES, a teen-oriented theater group, and the New York Youth Theater, through which her talent was discovered.

Saldana started her acting career by debuting as a guest spot in LAW AND ORDER, an American TV series in 1999 and she made her first film role in CENTER STAGE (2000) which carried the story of Ballet dancers from different backgrounds enrolling at a dance academy in New York.

She then hitched supporting roles over the following years in various groups of films. In 2003, she worked in THE PIRATES OF THE CARIBBEAN: The Curse of the Black Pearl as Anamaria and as Haven with actor Tom Hawks in drama THE TERMINAL.

During 2000 and 2005, she continued to act in a number of ensemble films, both commercial and Indie and appeared on TV programs. 2009 was a blockbuster year for Saldana giving her important roles that made her career turning point like, Uhura, from film reboot STAR TREK,  alien huntress Neytiri in James Cameron's AVATAR, both raised her profile significantly.

2010 gave her much more drama films and TV  programs. She further will play the same role Neytiri for AVATAR 2.

In June 2010, Saldana became engaged to her boyfriend Keith Britton whom she had a relationship for 11 years, who was an actor and CEO of MY Fashion Database.

In November 2011, Saldana and Britton ended their relationship and she had some sort of complicated relationship with actor Bradley Cooper. In 2013, Zoe started dating Italian artist Marco Perego, later they became a spouse.

Zoe won many awards like, MTV Movie Awards, Image Awards, Teen Choice Awards, Pople Choice Awards, and so on for best actress, best female supporting roles, which helped her of career move forward and very less chance of turning back.

Zoe Saldana has reached the age of 39 now. With a Black ethnicity, she has a height of 5 feet 7 inches, Saldana weighted 54kg. This many upliftment from the pictures Saldana played, her net worth gained 14 million dollars.

According to the interview given on Wome's Health magazine, Saldana  says she doesn't believe going against nature gifted things, like doing plastic surgery. Modelling career starter Zoe does care about her eating habit but don't favor dieting better she prefer doing Pilate which is close to dancing. Saldana can further be known as celebrity supporter of FINCA International, a microfinance organization.