Despite All Cheating Rumors, American Actress Leah Remini Is Still With Husband Angelo Pagan-Details On Their Relationship And Family Life!! 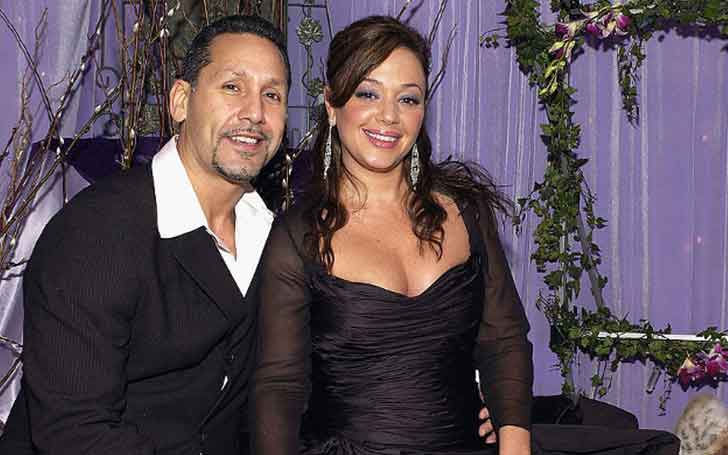 Many Hollywood celebs keep their personal lives low key, but not in the case of an American actress Leah Remini. She is very outspoken and reveals everything about her life including from her career to Scientology and even her family and relationships.

She has been married to producer and entrepreneur Angelo Pagan since 2003. The couple shares a daughter together. Let us find out how their relationship is going at present.

The King of Queens star Leah Remini is living happily with her entrepreneur husband Angelo Pagan. She married him in 2003, it's been, 15 years already and the couple is still together and still going strong,

The pair first met at a Cuban club El Florida in Hollywood and they eventually fell in love- it was love at first sight for both of them.

Then, they dated for the next seven years before tying the knot in 2003. She frequently uploads pictures with the caption, “Thankful #family” which tells us that she is living a blessed and successful married life.

Leah Remini is loyal to her husband and supports him always despite knowing that he is a serial cheater. When she met Pagan, he was a single father of three sons from his previous relationships. Even after dating her, he had an alleged affair with another woman.

In 2015, she penned the book, Troublemaker: Surviving Hollywood and Scientology- where she revealed some shocking facts of her life. During her appearance on The View, hosted by Joy Behar read an excerpt from her book that stated:

I am selfish and self-centered… My husband is a serial cheater and my mother was a s**t.

But, she did not elaborate on the details about his affairs. Despite all struggles, the couple is happy in their relationship. Additionally, the duo is blessed with a child completing their happy family.

Leah Remini and her husband Pagan welcomed their first child, a daughter named Sofia Bella on 16 June 2004. She was born one day after her 34th birthday.  She grew up in the sets and is friends with other celebrity kids like Jaden Smith and Suri Cruise.

In an interview with Redbook, Sofia admitted that she preferred to sleep with her parents than in her cozy bedroom. But it did not last for long. She added:

Sometimes I kick Daddy out of bed by accident and he ends up sleeping on the couch. He loves to sleep on the couch!

In the same interview, she told Prince of Persia, Chronicles of Narnia and Karate Kid were her favorite childhood films.

Sofia also has three-half sibling brothers from her father’s side.

In September 2018, she told LaPalme Magazine that she is harassed constantly by members of her former church. According to Daily Mail, she told:

People on our show are harassed constantly, especially me. Members of the Church go to my mother's restaurant, confront my little sister, and my step kids in San Francisco, trying to intimidate us.

She also showed her aggression and said these abusive scare tactics are what they call a religion!
The 48-year-old Hollywood star came forward and exposed her former church.

Remini raised as a member of the Church Scientology from childhood and left in 2013. After leaving the church, she began publicly criticizing the organization that many regarded as a cult.

In the same interview, she also revealed that she and her former close friend, Katie Holmes are no longer in a talking term. She additionally hinted that Holmes could lose custody of Suri- Holmes and her ex-husband Tom Cruise’s daughter.

The 50-year-old Angelo Pagan hails from the Puerto-Rican origin. He is a popular singer in his home country. Pagan has performed in clubs with his band Salsa Caliente and even released a solo album No Tengas Miedo.

He is a good friend of music producer Marc Anthony. He has appeared in numerous films and TV series. He now appears on his wife’s documentary series Leah Remini: Scientology and the Aftermath.