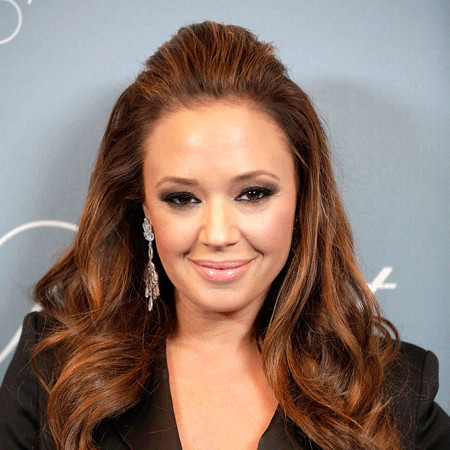 Scintillating as ever, Leah Remini's crazy hot body can turn heads around anywhere, anytime. She has been a great actress and a very successful comedian too. She is none other than the very pretty Leah Remini. Remini has been in the spotlight for her marvelous work.

Leah Remini is an American actress, author, former Scientologist and anti-Scientology activist known for starring as Carrie Heffernan on the long-running CBS comedy series The King of Queens from 1998-2007. She has been married to Angelo Pagan since 2003. The couple shares a daughter, Sofia, born on June 16, 2004. Her net worth is $20 million at present.

Leah Remini was born in the year 1970 on the 15th of June in a place called Bensonhurst, which lies in New York City in the United States of America under the birth sign Gemini. She is of mixed ethnicity as her mother is of Austrian Jewish background whereas her father is Italian whereas her nationality is American.

Not my most flattering #baby picture! #fbf

Her parents are Vicki Marshall and George Remini raised her with his two siblings named, Shannon Ferrara and Nicole Remini. She also has four half-sisters, Christine, Stephanie, Elizabeth, and Shannon. Moreover, her childhood was not difficult at all as her parents were well settled. Her father was a schoolteacher and her mother owned a company related to asbestos. Her work in movies has been phenomenal but she is known more for her work in TV shows.

When Remini was 13, she along with her mother moved to Los Angeles, California where she spent the remainder of her teenage years.

Leah Remini played the role of Angie in a movie called Follow Your Heart in the year 1998 and she really shined in this role of hers. In the year 2003, she played the role of Lara Campbell in a movie called Old School starring Will Ferrell, Luke Wilson, and Vince Vaughn. She appeared as Lydia in the very popular TV series Friends in the year 1995. The series starred Jennifer Aniston, Courteney Cox, Matthew Perry, and Lisa Kudrow.

She is known for her amazing work as Carrie Heffernan in the TV series The King of Queens. Other TV shows and movies to her credits till date include the likes of Hooves of Fire, Star Witness, In the Motherhood, The Talk, Hollywood Game Night, Phineas and Ferb and Leah Remini: It’s All Relative. Besides, she also worked as a co-host on CBS' talk show, The Talk.

It’s never too late for a #SecondAct. Watch the new trailer now and experience it in theaters November 21!

Some of her other movies and television shows such as Old School, mad Families, The Clapper, Handsome: A Netflix Mystery Movie, Second Act, Living Dolls, Normal Life, Paradise, The Hogan Family, and Saved by the Bell.

As of 2018, Remini is working in the upcoming movie, Second Act whereas she is also working in other TV Series like Leah Remini: Scientology and the Aftermath. She is still on her journey to become one of the promising actresses of Hollywood.

Leah Remini's Net Worth And Salary

Leah Remini has an astounding net worth of $20 million as of 2018, which proves how successful she has been in her career. She has earned a huge amount of salary in her career.

Remini also earns much from her published books like Troublemaker: Surviving Hollywood and Scientology costs $14.99 on Hardcover and $10.77 on Paperback. Besides, she owns a house in California worth $3.75 million. Furthermore, she also has a Rolls Royce worth $250k.

Remini is also involved in several charity works and non-profit organizations like No Kid Hungry, Children's Hospital LA, and St. Jude among others. She is a supporter of a charity auction for Breast Cancer in order to support breast cancer patent.

Leah Remini is a married woman who tied the knot to her boyfriend turned husband, Angelo Pagan after dating for months. Their love story is a very romantic one as Angelo proposed her with a candle-lit dinner. The couple first encountered one another in a Cuban club and restaurant named, El Floridita in Hollywood and started dating in 1996.

Finally, they tied the knot in 2003 in a private ceremony attended by families and friends. Regarding her husband, he is a popular singer back in his hometown and used to be a member of the band, Salsa Caliente. Since then, she is happily married to her husband

On 16th June 2004, Remni gave birth their first child, daughter Sofia Bella Pagan. Their daughter is very special to them and uses to attend several functions together. The family is living happily in their California's house.

There are very fewer chances of a divorce to occur in their lives though. She is not having any kind of extramarital affair and their bond as husband and wife is very much intact.

Besides, Remini has been the member of the Church of Scientology from the early age of nine.

Check out the interview with Leah Remini: