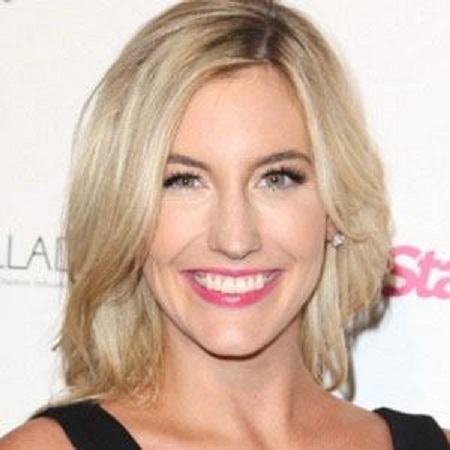 Television star Whitney Bischoff competed and won the 19th season of ABC television reality show, The Bachelor. She became engaged to Chris Soules on the finale of the season but the pair called off their engagement two months later. Bischoff is currently married to husband Ricky Angel with who she shares a son.

Whitney Bischoff was born on June 24, 1985, in Louisville, Kentucky, the United States of America, in a Christian family. Her mother's name is Carol Bischoff who had died when she was in her teenage.

Name of her father is not available. She was raised along with her sister Kimberly Bischoff. Bischoff is of American nationality and belongs to white ethnicity.

Bischoff has studied at the University of Kentucky from where she graduated with a Bachelor's of Science in Registered Nursing in 2007.

Career: Winner of The Bachelor Season 19

Following her graduation, Whitney Bischoff started working as a fertility nurse in Chicago, Illinois. In 2015, She joined The Bachelor season 19, in 2015.

The ABC hit television show featured Chris Soules, a farmer from Arlington, Iowa, at that season. He placed third position on The Bachelorette season 10 which featured Andi Dorfmanwhich.

Bischoff competed on The Bachelor season 19 along with Jade Roper, Becca Tilley, Kaitlyn Bristowe, Britt Nilsson, Megan Bell, Carly Waddell and many others.

Bischoff was successful to win the heart of Chris on the show and the pair became engaged on The Bachelor season 19 finale.

Bristowe was the first runner up and Waddell was the second runner up. Following The Bachelor finale, she went on the Jimmy Kimmel Show hosted by Jimmy Kimmel.

As we mentioned earlier, Whitney Bischoff became engaged to Chris Soules on the finale of The Bachelor season 19 after the farmer proposed the fertility nurse in a romantic way.

However, the pair ended their engagement just two months after the finale aired on the ABC network. Four months after her split with Chris, Bischoff met Ricky Angel on a dating app and eventually started dating.

According to People, the couple tied the knot on October 21, 2017, at the luxury Wequassett Resort on Cape Cod, Massachusetts.

The Bachelor's Whitney Bischoff Ties the Knot on Cape Cod with Ricky Angel at Wequassett Resort from Brighter Lights Media on Vimeo.

My sweet angel boy! Where have the past 3 months gone?! Just when we start getting into our groove it’s time for me to get back to work. As much as I’m ready to get back to my passion, I’ve had many sleepless nights wondering how anyone could take as good of care of you than your daddy and I?! Although there will never be a replacement, I am so thankful for @sarmeadors and Gold Coast Nannies for doing the leg work to find our sweet boy the perfect fit. As a new mom, there is nothing better than having the peace of mind that your child is in the best care possible while you’re away. I’m forever grateful! If you live in the Chicago area, I highly recommend Gold Coast Nannies. @ovaeggfreezing I’m coming for you :) : @ourdaysphotoandfilm

The husband-wife duo welcomed their first child, a baby boy, on May 4, 2019, and they have named their son Hayes Singleton Angel.

Being a successful TV star and the winner The Bachelor season 19, Whitney Bischoff has earned a substantial amount of money. She has earned most of her money from the Bachelor Nation.

Bischoff hasn't given any details about her net worth. However, some online sources have suggested that the 34-year-old television personality has an estimated net worth of $150 thousand.

He currently salary is unknown but as per a former Bachelor Nation member, Stephen Carbone, a star on the Bachelor makes about $100,000 per season.

She reportedly recieved a $250,000 prize money after winning The Bachelor season 19.