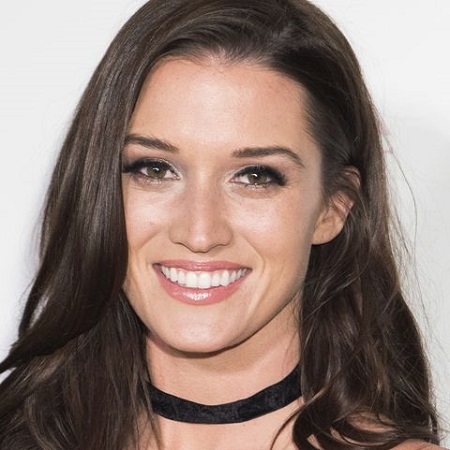 Jade Roper is an America-based television star who has appeared on th The Bachelor season 19 and Bachelor in Paradise season 2. She is also the founder of Naturally Jade, a vegan and eco-friendly cosmetics company. She has been married to her BIP co-star Tanner Tolbert with who she shares two children.

Jade Roper was born on December 19, 1986, in Denver, Colorado, the United States of America, to her father Laren Roper and mother Kim Roper.

She was raised in Nebraska along with her brother Zach Roper. She later moved to Los Angeles where she worked as a cosmetics developer.

She is of American nationality and belongs to white ethnicity. She is 5 feet 5 inches tall and her height is 62 KG.

As for the educational background, Jade attended  Le Cordon Bleu College of Culinary Arts in Las Vegas from where she completed her graduation.

Career: Competed on The Bachelor and Bachelor in Paradise

Jade Roper was working as a cosmetic developer when she joined the season 19 of the ABC hit television series, The Bachelor, in 2015, which featured Chris Soules, a farmer from Arlington, Iowa.

Chris was the second runner up on the 10th season of The Bachelorette which featured Andi Dorfmanwhich.

The other contestants on The Bachelor season 19 included Whitney Bischoff, Becca Tilley, Kaitlyn Bristowe, Carly Waddell, Britt Nilsson, Megan Bell and many others.

Jade was eliminated in the 8th week of the season, becoming the third runner up. Bischoff was the winner of the season while Bristowe and Waddell became the first and second runner ups respectively.

Despite her elimination on The Bachelor season 19, Jade was invited to compete on the season 2 of Bachelor in Paradise. She and Tanner Tolbert became the winner of that BIP season and the two became engaged on the finale of the show.

As we mentioned earlier, Jade Roper became engaged to Tanner Tolbert on the finale of Bachelor in Paradise season 2 after the handsome hunk proposed her in a romantic way.

Here's the video clip of Tolbert popping the question to Jade, Enjoy Watching.

The engaged couple exchanged vows in a lavish ceremony in February 2016. The wedding was held at Monarch Beach Resort, Dana Point, California.

Jade and her husband welcomed their first child, an adorable daughter, in August of 2017. They named the baby girl Emerson Avery.

Later in January 2019, she announced that she was pregnant with the couple's second child, a baby boy. She gave birth to an adorable son on July 30.

Being a successful television star and Bachelor in Paradise winner, Jade has certainly earned a substantial amount of money from the Bachelor Nation.

The exact figure of her net worth is not available but looking at her lavish lifestyle, it seems Jade's net worth is in millions.

According to a former member of Bachelor Nation, Reality Steve a.k.a Stephen Carbone, a star on the Bachelor or Bachelor in Paradise make around $100,000 per season.

The winning prize of The Bachelorette or BIP is reportedly $250,000.