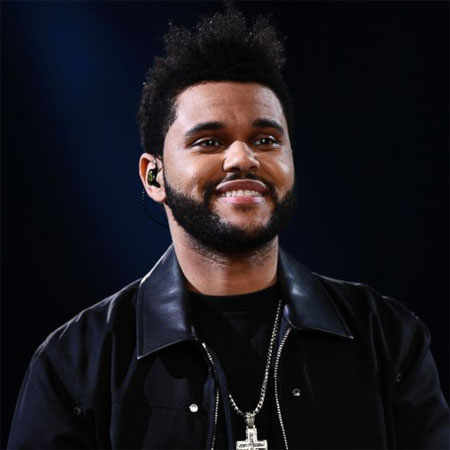 The Weeknd is the stage name of Canadian singer, songwriter, as well as a record producer, Abel Makkonen Tesfaye. He got recognition after posting a number of his songs on YouTube under the username 'The Weeknd.'

Weeknd was in a relationship with Selena Gomez a year before they broke up in 2017. Previously, he also dated Alice Ustinova & Bella Hadid.

The Weeknd was born Abel Makkonen Tesfaye on 16th February 1990 in Scarborough, Ontario. He belongs to Black-Canadian ethnicity and holds a Canadian nationality.

Weeknd is the only child of his parents, Makkonen and Samra Tesfaye who moved from Ethiopia to Canada in the 1980s. His father left the family when he was one or two years old and Weeknd was brought up by his mother & maternal grandmother.

His first language is Amharic, that Weeknd learned from his grandmother. He also became fluent in French from French-immersion class when he was in eighth grade.

Weeknd left home after dropped out from the school & began to live with two of his friends in a one-bedroom house at 65 Spencer Avenue.

The Weeknd began his career with mixtapes, 'House of Balloons,' 'Thursday,' and 'Echoes of Silence' that he released from his website for free which helped him create a loyal fan base.

On March 21, 2011, Weeknd released his first mixtape, 'House of Balloons' which was selected as a nominee for the 2011 Polaris Music Prize. The mixtape has nine tracks, including the songs he created for Rose.

Weeknd began to perform live within a few months & started collaborative works with Drake as a vocalist. He also released another mixtape titled 'Thursday,' containing nine tracks on 18th August 2011.

In April 2012, Weeknd and his band began performing at several festivals throughout US & Europe. He also performed at the Primavera Sound Festivals in Spain & Portugal and Wireless Festival in London.

In September 2012, Weeknd signed a deal with Republic Records and a joint venture with his imprint XO, releasing a compilation album, 'Trilogy' the next month. The album contained all the tracks from his three mixtapes, along with three additional entries.

In September of the following year, Weeknd released his debut studio, 'Kiss Land,' which earned positive reviews from critics. His longtime collaborator Drake made a guest appearance in the song 'Live For.'

In 2013, Weeknd contributed to the soundtrack of the Hollywood movie 'The Hunger Games: Catching Fire.' He then accompanied Justin Timberlake on his 'The 20/20 Experience World Tour'.

In 2014, Weeknd collaborated with Ariana Grande on the duet 'Love Me, Harder.' Later, he released the song 'Earned It,' from the soundtrack of the movie 'Fifty Shades of Grey.'

In August of 2015, Weeknd released his second studio album 'Beauty Behind the Madness' that has five songs, featured guest appearances from Ed Sheeran, Labrinth, and Lana Del Rey.

In 2016, Weeknd worked with Kanye West's on the song 'FML' from Kanye's album 'The Life of Pablo.' The same year, he also appeared on the song '6 Inch' from Beyoncé's album 'Lemonade.'

Recently, The Weeknd broke up with American singer and actress Selena Gomez While working on a project together, they came close and began dating from January 2017.

According to some sources, the duo was spotted hugging & kissing following a three-hour extended date night at the Santa Monica hotspot Giorgio Baldi in January 2017.

After that, they temporarily moved together in Greenwich Village, New York in September 2017. After being together for more than ten months, they broke up in October 2017.

Previously, Weeknd dated an American fashion model, Bella Hadid in early 2015 to late 2016 and also had an affair with Alice Ustinova.

In January of 2015, Weeknd was arrested for punching a Las Vegas police officer. He pleaded no contest, & was sentenced to 50 hours of community service.

In December of following year, Weeknd was sued by Cutting Edge Music, as they alleged that the bass line for "The Hills" was copied from the score of The Machine. The outcomes of the lawsuit are unknown.

The Canadian recording artist as well as a producer, The weekend, has a net worth of $50 million.  He grossed more than $90 million from record sales, touring and merchandise sales.

Weeknd’s debut studio album 'Kiss Land' peaked at number two in the United States. He has a $20 million house in Hidden Hills, CA. In May 2017, he bought the lavish mansion.

The Weeknd is also a philanthropist who has provided monetary support to several causes including $250,000 donation to the Black Lives Matter movement. He has three cars of different brands- Lamborghini ($530,000), McLaren P1 ($1.5 million) and Bentley ($300,000).

Weeknd’s most successful album is 'Beauty Behind the Madness'; earning him multiple awards & nominations. It became the tenth best-selling album of 2015, with 1.5 million copies sold worldwide, & has also sold over two million copies in the United States so far. In 2016, he earned $700K for endorsing various brands.

Five Facts about The Weeknd