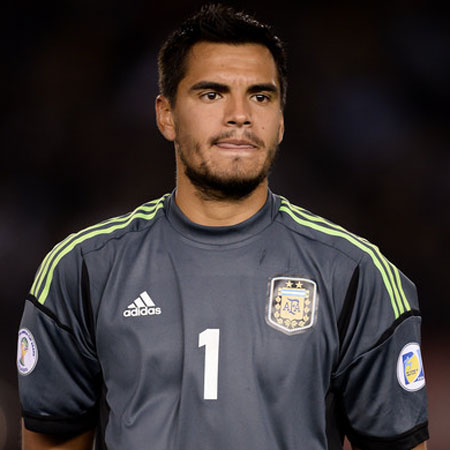 Sergio Romero, seen in the highlights reel above, proved to be one of Argentina’s biggest assets during its match against Iran in the 2014 World Cup. After helping team Argentina to defeat the Netherlands in the semi-finals of the tournament, he became limelight in media and shortlisted for the three best goalkeepers of the FIFA World Cup 2014. Unfortunately, he could not keep clean sheets in the final match and lost against Germany.

Even, after losing the match, he remained the first choice goalkeeper of the Argentine national football team. He also plays for the EPL giant Manchester United as of June 2018. He debuted his club career in Racing Club in 2006.

Romero is the most capped goalkeeper in the history of the Argentine national team, playing over 90 times his debut in 2009. In 2008, he led his team to win the gold medal at the 2008 Olympics. He was ruled out due to a knee injury from the FIFA World Cup 2018.

Sergio Germán Romero was born on 22 February 1987, in Bernardo de Irigoyen, Argentina. He spent his early days at his hometown town. He has two Siblings; Diego Romero and Fernando Romero.

Romero was born and grew up in Argentina where his two older siblings became basketball players and he chose to be a footballer. Due to the smaller stature in comparison to them, he earned the nickname of “Chiquito” which means tiny. He began his youth career at Almirante Brown and CAI before joining Racing Club.

Romero passed from the youth to the first team of Racing Club in 2006, making his debut in the Argentine Primera Division. He spent a season with Racing Club after making his professional debut at the age of 19. He became the first-choice goalkeeper role of the team. He spent one season there and moved to AZ.

In March 2007, Romero signed a deal with Dutch club AZ managed by Louis Van Gaal. He spent four years and capped in 90 matches. During his tenure with AZ, he appeared in UEFA Europa and Champions League.

In August 2011, he signed a 4-year contract with Italian club Sampdoria for $2.45 million (€2.1 million). When he joined the club, the club was relegated to B division and he said that he would help to promote the club into Serie A.

He missed several matches of the first season due to his international commitment. At the end of 2011 season, his team promoted to A division. In his second season, he remained the first choice goalkeeper of the season. In the opening match of the season, he kept a clean sheet in a 1-0 win over AC Milan.

In the 2012-13 season, he made 33 appearances in all competitions despite appearing on the substitute for the last three remaining league matches.

For the 2013-14 season, he was loaned to French club Monaco for Ligue 1. He spent one season and played three league matches as the team ended as runners-up to Paris-Saint-Germain.

He then returned to Sampdoria and played as a second choice goalkeeper for the club for the next season. He was released by the club at the end of the 2014-15 season when his contract came to an end.

In July 2015, she completed the signing of Romeo on a free transfer. He penned a three-year contract with the club. He made his premier league debut on 8 August 2015 as the season opened with a 1-0 victory against Tottenham Hotspur at Old Trafford.

In his second season, the new manager Jose Mourinho provided a chance to play him as the first choice goalkeeper of the club. He made his first clean sheet of the season on September 29, 2016, win over Zorya Luhansk.

Romero then kept three more clean sheets in the UEFA Europa League matches, in which he kept two in both legs against Saint Etienne. He made a victory to win the 2017 Europa League Final over Ajax. He plays as the second choice goalkeeper of the Manchester United as of June 2018.

Romero then called up to the full senior side by then-coach Diego Maradona in 2009. He made his international debut on 9 September 2009 in a 1-0 FIFA World Cup qualifying loss against Paraguay and made to qualify for the FIFA World Cup 2010 by defeating Uruguay.

He played in all five of Argentina’s 2010 World Cup matches and ended at the quarter-final stage. He then played in the Copa America 2011. Argentina lost to Uruguay on penalties in the quarter-finals. During that tournament, he made two clean sheets against Colombia and Costa Rica.

Romero retained his position as number one choice under new coach Alejandro Sabella for the 2004 FIFA World Cup qualifiers.

He was the main goalkeeper at the 2014 FIFA World Cup. In the semi-final match, he became the man of the match by saving kicks from Ron Vlaar and Wesley Sneijder from opponent team Netherlands. Romero’s team lost the final match against Germany at the FIFA World Cup 2014.

He was named on the three-man shortlist for FIFA’s Golden Globe award for the tournament’s best goalkeeper. Romero was a part of the Copa America 2015, he led his team to the final match of the tournament.

But, Argentina lost the match on a penalty shootout with Chile. In May 2018, Romero was named in Argentina’s squad for the FIFA World Cup 2018 but was ruled out of the tournament due to a knee injury suffered the day after the announcement.

Sergio Romero’s net worth is $8 million, as of 2018. He receives $66K (£50,000) weekly wage on Manchester United. His annual salary is $3 million. He earns a hefty amount of money from his playing career, sponsorships and endorsements.

In 2017, he bought a lavish home in Milan, Italy. According to some sources, he will stay there after ending his career with Manchester United in 2021. He resides with his wife and children at an apartment in Manchester. Romero has a collection of lavishes cars.

Sergio Romero is a married man. He is married to Argentine model Eliana Guercio since 2008. The pair met in 2007 and nearly 6 months later the duo married on 16 October 2008.

His wife Eliana Guercio is a model and actress based in Argentina. She has appeared in few movies and TV series like Todos Contra Juan, Son De Fierro and Casados con Hijos.

He plays video games and watches movies during his leisure time.  He is a good friend of his teammates like Lionel Messi, Sergio Aguero, Angel Di Maria and other players.

Here are the top 13 amazing saves of Sergio Romero.