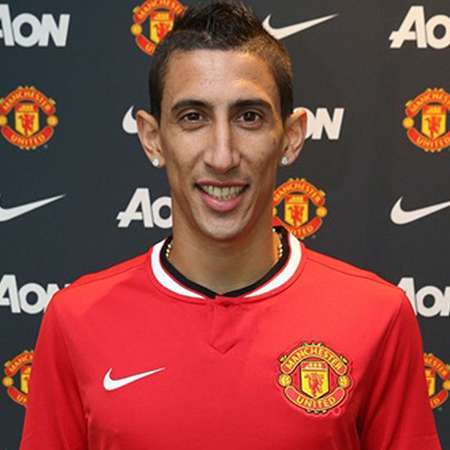 Midfielder, Angel di Maria is better recognized for being a player of his current team Real Madrid and for also leading Argentina to win the Olympic Gold Medal in 2008.Angel has set foot in many leagues including Portuguese league and UEFA Champions league. Angel is mostly celebrated for representing the nation Argentina in 2010 FIFA World Cup.

Born on February 14 1988 in Rosario, Argentina, Angel Fabian di Maria Hernandez started his youth football career in 2007 joining Club Atletico Rosario Central based in Rosario, Argentina. Di Maria made his debut for Rosario Central in 2005 thus commencing his senior career. Angel played in Rosario Central till 2007. While in the club Angel appeared in thirty five matches and delivered six goals. However, Angel’s football career started to pick up pace in 2007 when he was picked to play for the under – 20 squad. Angel played very well in the FIFA under-20 World Cup, scoring three goals thus leading Argentina to win the tournament. By then all the European football club managers eyes were drawn to him and thus on July 27 2007, Angel finally landed to Sport Lisboa e Benfica (also known as Benfica) based in Lisbon, Portugal with a transfer fee of 800 million euro. While in the club, Angel played in the Portuguese League and won the 2008-2009 seasons and 2009-2010 seasons. He also helped in the victory of Portuguese Liga in 2009-10. On 28 January 2008, Di Maria became part of the Argentina squad for the 2008 Beijing Olympics. Angel’s national team won against Netherlands with a 2-1, part of which was his goal at the last minute. Following that , on August 23 Angel scored a remarkable game winning goal against Nigeria to capture Argentina’s second straight Olympic Gold Medal in the final match of the Olympic tournament .On 22 December 2009 Angel scored 2 goals for Argentina in an unofficial friendly match with Catalonia. On 27 February 2010 Angel delivered his first hat trick in a legendary 4-0 win against Leixoes SC which gave him huge recognition. Further on 24 May 2010 Angel delivered 3 goals for Argentina in a friendly match against Canada which lead to a home victory. While in the club angel appeared in seventy six matches and delivered seven goals.

Later on July 1 2010, Angel was transferred to Real Madrid Club de Futbol based in Madrid, Spain with a fee of 3300 million euro. Angel made his first debut for Real Madrid on 4 august 2010 in a friendly match against Club America which was won by his club with a 3-1. Angel was chosen as a part of the 23 players for the 2010 FIFA World Cup. Angel scored a single victory goal on 11 August 2010 in a friendly match with Republic of Ireland. On 24 august Angle opened the score of 2-0 win against CA Penarol. Angel had an integral part on 11 July 2011on the 201 Copa America match against Costa Rica which was won by Argentina with a 3-0. With a height of 180 cm and a weight of 70 kgs, Angel was performing very well in his shirt No.22 given by Real Madrid. While in real Madrid he scored 8 goals for Argentina .On June 3 2012 Angel scored four winning goals for Argentina in the 2014 World Cup qualification against Ecuador. Successively on 7 September 2012 he scored once in a victorious 2014World Cup qualification match against Paraguay. While in Real Madrid, Angel played many leagues and helped to win them which includes La Liga (2011-12), Copa Del Rey, twice in 2010-11, 2013-14, Supercopa de Espana (2012) and UEAF Champions League (2013-14). Since entering into Real Madrid Angel has appeared in 124 matches and has delivered 22 goals. Although Angel’s salary is unknown his current market value is 3000 million euro.  Di Maria was recently named the man of the match by UEFA after the 2014 UEFA Champions League Final and was presented with the award by Sir Alex Ferguson.