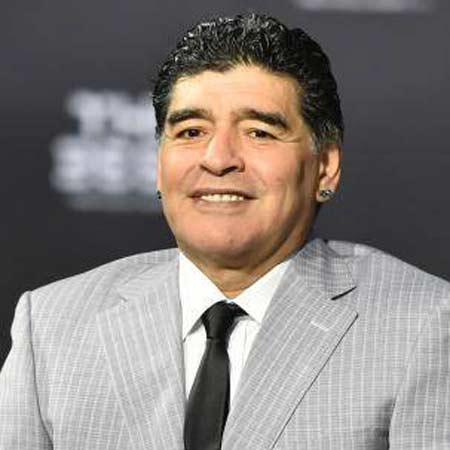 Widely known for his excellent dribbling action, powerful assists, accurate passes and impressive footwork, Diego Maradona is considered one of the most controversial and newsworthy figures in the history of the football.

The football legend Maradona led his country Argentina to victory in the 1986 World Cup, despite being involved in a lot of controversies after scoring two contrasting goals in the 2–1 quarter-final win against the United Kingdom.

Despite his primary role as an attacking midfielder, Maradona was the top scorer in Serie A in 1987–88, with 15 goals as well as became the all-time leading goalscorer for Napoli scoring 115 goals. He gained crowning achievement while he was playing for the world's biggest club Barcelona and won numerous accolades too.

Born on 30th October 1960, at the Policlínico Evita Hospital in Lanus, Buenos Aires, Argentina, Diego Maradona spent most of his early childhood on the southern outskirts of Buenos Aries. He was raised up in a low earning family.

Maradona is the fifth of eight children born to Diego Sr. and Dalma Salvadora Franco. His two younger brother were also professional football players. His nationality is Argentinian, and ethnicity/race is Caucasian. As a gift, he received his first soccer ball at the very early age of 3 and gradually developed his passion towards the game.

CAPTION: Diego Maradona was heavily involved in sports during his childhood. SOURCE: Remezcla

After Maradona showed his great potential playing in his neighborhood club Estrella Roja, he caught the attention of a scout when he was just 8 and became a staple of Los Cebollitas. He impressed spectators by showing his wizardry with the ball. He considers Rivelino and Manchester United Winger George Best as his inspirations and hero.

Diego Maradona started his footballing career professionally 10 days before his 16th birthday playing for Argentinos Juniors. He spent a half decade at Argentinos scoring 115 goals in 167 appearances before he made his transfer to Boca Juniors for $4 million on  20 February 1981 and debuted two days later scoring two goals in a win against Talleres de Córdoba. And he also helped them win the league title.

Following a loss at the World Cup in 1982, Maradona signed a contract for a world record fee of £5 million ($7.6 million) with the Spanish club Barcelona. Under the guidance and training of coach Cesar Luis Menotti, the club won the Copa del Rey, Spain's annual national cup competition defeating Real Madrid in the final.

Though he led the club to win the Copa del Rey and Spanish Super Cup, he suffered from illness, injury as well as controversial incidents on the field throughout his tenure in Barcelona. Durig the match against Bilbao squad, Maradona hit the former footballer Andoni Goicoechea Olaskoaga. In response, Bilbao's team members surrounded Maradona and as soon as the fight broke out Barcelona's players came in the field to protect their teammate. And then Maradona and his other teammates started kicking and punching anyone in a Bilbao shirt. As a result, sixty people were injured.

Following the incident, Barcelona fired him from the club because of his frequent unidisciplinary behavior at the pitch. Despite his outstanding performance for Barcelona, he did not gain much praise. But he became the part of criticism for many times during his career at the club.

One Barcelona executive stated, "When I saw those scenes of Maradona fighting and the chaos that followed I realized we couldn't go any further with him."

During his two seasons with Barcelona, Maradona scored 38 goals in 58 appearances. Maradona then made his transfer to Napoli in Italy's Serie A for another world record fee, £6.9 million ($10.48M). His association with the club was the most fruitful as he reached the peak of his professional career and helped the club to enjoy immense success and victory becoming an adored star among the club's fans. On 5 July 1984, he was presented to the world media as a Napoli player at the Stadio San Paolo.

Durig his successful career with the club, Maradona led them to win the Serie A Italian Championships twice in 1986-87 and 1989-90.  Subsequently, the versatile footballer likewise assisted the club in winning the Coppa Italia in 1987, the UEFA Cup in 1989, as well as the Italian Supercup in 1990.

Despite his role as an attacking midfielder, Maradona also became the top goalscorer with 15 goals in Serie A in 1987–88. He was also the all-time leading scorer with 115 goals for Napoli until Marek Hamšík surpassed him in 2017. At the time, he also faced several criticisms because of his addiction to drugs and left the club in 1992, after he spent 15 months without playing any matches because he failed a drug test.

Diego Maradona made his full international debut for the Argentina national at the young age of 16 when he played against Hungary on 27 February 1977. With his dribbling ability, vision, and close ball control, Maradona led his team to win the 1979 FIFA World Youth Championship in Japan shining in Argentina's 3–1 final victory over the Soviet Union. And he made his senior appearance in 1979 and registered his first senior international goal in a 3–1 win against Scotland, on 2nd June 1979.

The footballer played World Cup tournament for the first time in 1982. Despite being defending champions, Argentina was not able to perform well during the 1983 World Cup as the team was driven out from the tournament in the second round after Brazil defeated them. He scored twice in the competition.

Maradona gained crowning achievement when he led Argentina under his captainship to victory at the 1986 FIFA World Cup. He played a crucial role throughout the tournament scoring 5 goals and made 5 assists. He also became the most dynamic player of the tournament.

Maradona again continued his role as a captain of the Argentina team in the 1990 FIFA World Cup in Italy. Playing a key role he led his team to another World Cup final though he suffered an ankle injury. But they could not replicate the success as Argentina lost 1–0 to West Germany in the final.

Maradona played just two games in the 1994 FIFA World Cup and scored one goal playing against Greece before being ousted for failing an ephedrine drug test at the end of his international career which spanned 17-year.

Maradona yielded 34 goals in 91 appearances, during his time with the Argentina national team.

After his extensive football career, Maradona made his transition in the field of management and managed several professional clubs. In May 2011, he started working as a manager of Dubai club Al Wasl FC in the United Arab Emirates. And he also managed the club Fujairah.

After the former Argentina national team coach Alfio Basile resigned, Maradona immediately applied for the vacant role, and AFA chairman Julio Grondona confirmed on October 29, 2008, that Maradona would be the head coach of the national team from the December of 2008. And for the first time, he managed the team on 19 November 2008 in a match against Scotland.

Awards And Achievements Of Diego Maradona

Diego Maradona won the Golden Ball award as the tournament's best player in the FIFA U-20 World Cup. He received the Diamond Konex Award from the Argentine cultural no-profit organization Konex Foundation for being the ultimate footballer of the decade. The award was one of the most prestigious culture awards in Argentina.

In 2000, Maradonna also won the FIFA Player of the Century award. The second goal which he scored in the quarter-final match of the 1986 World Cup against the United Kingdom and was voted as the ‘Best Goal Ever Scored in World Cup’ in 2002 FIFA poll.  In the year 2010, he was listed as the Greatest 10 World Cup Players of all times by the Times magazine.

It has been reported that Maradona only paid €42,000, two luxury watches and a set of earrings. He owned a Ferrari Testarossa worth $181,000.

In 1982, Maradona had endorsements with many world-renowned companies, including Puma and Coca-Cola, earning him $1.5 million per year.

During his long football career, the footballer was embroiled in a lot of controversies which nearly took down his illustrious career. Even though his legacy still remains in the world of football Maradona's addiction and indiscipline has left a huge taint in his career. Maradona started using cocaine in the mid of 1980s and became a regular user of it until 2004.

Despite his amazing achievements at the club, Diego Maradona created several controversies and made headline due to his addiction to drugs. At the time, he was also fined $70K from Napoli for missing its games and practice matches. He also made headlines after a scandal about an illegitimate son Diego Sinagra, now an Italian footballer and beach soccer player.

One of his major controversies came during the 1982 World Cup when Maradona scored two contrasting goals in the quarter-final match against the United Kingdom, however, the first goal of Maradona against British was scored by striking the ball with his hand.

Later, Maradona described it as "a little with the head of Maradona and a little with the hand of God". The goal also became known as the "Hand of God." On 22 August 2005, Maradona accepted on his television show that he scored the goal hitting the ball with his hand and the head didn't touch the ball.  And his second goal in the match was voted by FIFA as one of the greatest goals in the history of the Worl Cup.

It was reported by an unnamed journalist that Maradona offered her 500 Euro to have sex. But the journalist denied the offer and informed the police. The accusation settled after the journalist confirmed her reports at a police department, saying there was no violence and just a proposal.

Diego Maradona married his longtime girlfriend Claudia Villafañe on 7 November 1984 in Buenos Aires. The couple welcomed their first child, a daughter named Dalma Nerea on April 2, 1987. His wife Villafane gave birth to their second daughter Gianinna Dinorah on May 16, 1989.

Maradona admits in his autobiography that he was not always perfect and loving husband for Claudia, though he mentions her as the love of his life. Despite their long journey of marriage, the couple filed for divorce on 7th March 2003 which was finalized the following year.

After their divorce, they remained on friendly terms and used to travel along with their children in various places. He confirmed having an illegitimate son named Diego Sinagra, born in Naples on 20 September 1986. His son is an Italian professional football player.

Maradona started dating Veronica Ojeda in 2005 and welcomed their first child, a son Diego Fernando Maradona on February 13, 2013, in Buenos Aires, Argentina.  The couple split in 2012. It was reported that he also has a daughter Jana Maradona with his one-time girlfriend Valeria Sabalain.

Check out Maradona's skills during the peak of his career.