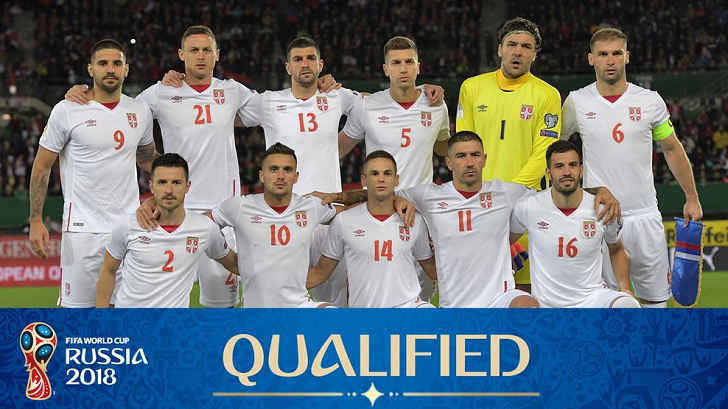 The Serbia national football team (Serbian: ????????? ?????????????? ?????? / Fudbalska reprezentacija Srbije) is controlled by the Football Association of Serbia. With the national team nicknamed the Orlovi(??????, the Eagles), the team represents Serbia in a s sociation football.

FIFA and UEFA have considered the Serbian national team to be the direct and sole successor of the Yugoslavia and Serbia and Montenegro teams. FIFA has ranked the country in 37th position.

Mladen Krstaji? (Serbian Cyrillic: ?????? ????????) currently manages the Serbian national team. He is a former player who played as a center back and represented Serbia and Montenegro at the 2006 FIFA World Cup.

Known for his composure, leadership, and defensive ability, Krstaji? succeeded to lead the national team to the 2018 World Cup. He became the coach of the team in October 2017 and would take on the role permanently or at least until the end of the FIFA 2018.

Aleksandar Kolarov (Serbian Cyrillic: ?????????? ???????), a Serbian professional, currently plays for Italian club Roma and is the captain of the Serbia national team. He primarily plays as a left-back and can also operate as a center-back.

Kolarov was named Serbian Player of the Year in 2011. Started his career with Red Star Belgrade, he played for other clubs such as ?ukari?ki, OFK Beograd, Lazio, and Manchester City.

Kolarov scored a winning goal in the 2018 World Cup qualifying game against the Republic of Ireland at Aviva Stadium, Dublin.

Branislav Ivanovi? (Serbian Cyrillic: ????????? ????????) is a professional player. He currently plays for the Serbian national squad and Russian club Zenit Saint Petersburg. He plays as a right back and can also play as a center back.

Ivanovic scored 2 goals in the FIFA 18 qualification match against Moldova making a 0-3 victory. He is the most capped active player with 102 caps and a top scorer with 12 goals.

Serbia will be playing against Costa Rica, Switzerland, and Brazil in the next edition of the tournament, World Cup 2018. Have a look at this World Cup Schedule for more details about the match.