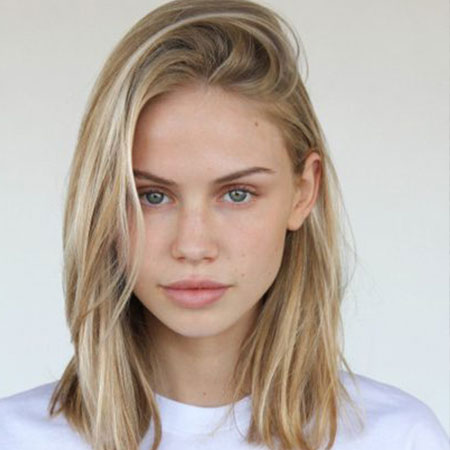 Scarlett Leithold is an American model and social media personality well known for her a s sociation with Italian fashion brand Brandy Melville. She started her modeling career when she was just 15 years old. She currently works for Next Models Worldwide which she joined after working for Wilhemina Models. Her prominence peaked after renowned Canadian singer Justin Bieber posted her photo on his Instagram.

Scarlett Leithold was born on June 1, 1997, in Los Angeles, California, the United States of America under the zodiac sign of Gemini. People who are born under this zodiac sign are sociable, communicative and ready for fun.

She holds an American nationality and belongs to mixed ethnicity-her parents belongs to the Swiss, German, Irish, Dutch, and English descent. She was born to mother Sharolyn Leithold and has two siblings, elder sister Martine Leithold and younger brother Wolfgang Leithold.

She moved to Butler, Pennsylvania with her family when she was a small child. Later, she relocated to Los Angeles when she turned 11. She was homeschooled after returning back to the LA which enabled her to take modeling cla s s and pursue a career in modeling along with her study.

Scarlett Leithold was 14 when Wilhelmina Models, a full-service modeling and talent agency known as Wilhelmina International Inc discovered her. At the age of 15, she signed with the agency and her modeling career started. After working with Wilhelmina, she signed with another agency, Next Models Worldwide.

She is also a popular face on Instagram, Twitter and Ask.fm. She regularly checks her Ask.fm account where she goes by the name of ‘sscarlettleithold' and answers the question that her fans ask her.

The video shown below is the short video where Scarlett Leithold gives a pose for a photo shoot:

As of now, she has worked for many fashion brands.

Scarlett Leithold has not disclosed about her net worth yet but as a successful model, she has made a good amount of fortune from her career.

Amount of fortune. She started her career in modeling when she was just 15. She even worked with famous companies such as Whilhelmina International Inc and Next Models Worldwide. in her early years of modeling which helped her getting more offers from renowned brands and companies.

According to some net worth and salary sources, a model earns an average of $32,000-$48,000 salaries per year. Further, the source revealed that a model's average salary is $42,000 in California.

She is also famous on Instagram where she has about 2.3 million followers from which she earns some decent amount of money.  She also shares her pet dog Lilah's photographs on her social media.

As of now, her net worth is not disclosed, however, looking at her fame and working skills, we can speculate that she has a net worth in thousands of dollars.

Scarlett Leithold is a gorgeous American diva which makes almost all of her fans wonder whether he has a boyfriend or not. Currently, Scarlett Leithold is living a happy single life. As of now, she seems to be focused on her modeling career so she doesn't have any time for a romantic relationship.

Besides, she is a dog lover. In her free time, she loves to spend time with her dogs and enjoy watching football. Whenever she gets free from her workload, she goes to the beach and plays beach volleyball. She also goes to gym four times a week and loves to do yoga which indicates how much she is concerned about her fitness and physique.

She is active on social media such as Instagram, Twitter and Ask.fm where her fans often ask her question which she loves to answer.

What Is Her Relation With Justin Bieber?

It's no doubt that the gorgeous model Leithold attracts almost every man. Likewise, the Canadian singer and songwriter Justin Bieber was also fascinated by her beauty and personality so he followed her on her social media. Moreover, he also posted her photos on his Instagram which sparked the speculations about their relationship. But the couple, in reality, are not even friends.

Scarlett, on the other hand, never followed Bieber and as per her,  she is not a big fan of Bieber so she hasn't followed him till the date. Looks like Justin is just a big fan of her and beautiful model Scarlett.

You May Also Like: Ashley Graham, Amanda Cerny, Tyson Beckford, and Rebecca Gayheart