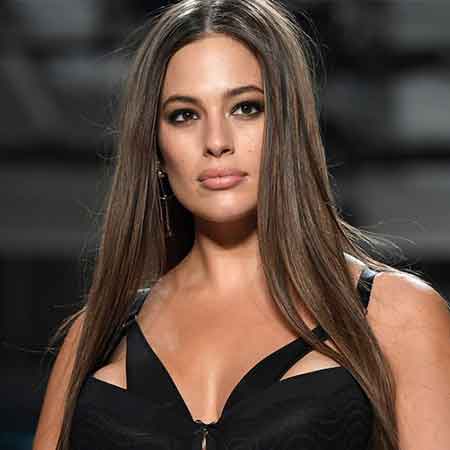 Ashley Graham is an American model and actress who is best known for making history as the first plus-sized model to ever appear in the Sports Illustrated annual swimsuit. She has also appeared on the cover of various fashion magazines like Elle, YM magazine, Vogue, Glamour, Haper's Bazaar and various Levi's Campaigns. Besides this, she is the judge of the reality show, America's Next Top Model.

Growing up Graham was diagnosed with attention deficit hyperactivity disorder (ADHD)  and dyslexia. She completed her school in the year 2002 from Scott Middle School and later attended Lincoln Southwest High School from 2002 to 2005.

Graham began her modeling career when I&I agency found her in 2000 and signed her first modeling contract. After attending a model convention in 2001 she signed her second contract with Wilhelmina Models. In the year 2003, she worked with Ford Models.

Vogue Magazine's Sally Singer profiled her in 2007 which was her first major event and then appeared in the Glamour on October 2009 issue, These Bodies are Beautiful at Every Size with additional plus-size models including Amy Lemons, Kate Dillon Levin, Lizzie Miller, Jennie Runk, Anansa Sims and Crystal Renn.

In 2010, Graham appeared in the controversial TV commercial of Lane Bryant which was able to gain more than 800 thousand views on Youtube. On 31 May 2010, she appeared on The Tonight Show with Jay Leno to addressed the controversy.

Again in 2010, she appeared in an editorial for Bust magazine and several Levi's campaigns, alongside Sabina Karlsson, Ana Lisboa, Marquita Pring and McKenzie Raley. On December 2012, she featured in two of the Billboards at New York. Similarly, at the end of the year 2012, she was named the Full Figured Fashion Weeks's Model of the Year.

In 2013, Graham appeared as a coach for the aspiring plus-size model on MTV. She also designed a lingerie line for the Addition Elle. Again in the May 2014 issue, she appeared for international's Harper's Bazar. She was the cover model of Elle Quebec on June 2014.

After a year, she modeled in an advertisement for an annual swimsuit issue. There she was the first plus-size models to appear in the pages of Sports Illustrated Swimsuit Issue. , Graham in 2016 served as a backstage host for Miss USA  2016,  Miss Universe 2016, Miss USA 2017 and Miss Universe 2017. In addition, she is the judge of the reality TV show America's Next Top Model.

As of 2018, she wrote her autobiography named A New Model: What Confidence, Beauty, and Power Really Look Like. The memoir narrates her initial struggle as a plus-size model and as an advocate for body positive.

Ashley Graham who appeared on various magazines and advertisements has ama s sed a decent amount of money from her career. As per the resources, she has an estimated net worth of $10 million.  She earned money from photo shoots, contracts, and brand endorsements.

Similarly, she is also involved in the charity and community service. She has participated in humanitarian missions in South Africa with the Themba Foundation. She gave a TED Talk advocating for self-acceptance with regards to body images.

Graham is married to Justin Ervin; a videographer. The couple first met at church in 2009 and after dating for almost a year they got married in 2010.

Prior Ervin her initial relationships were mostly sex-based. She often talks about the disadvantages of such overtly sexual relationships. She said that when she finally found the right man, she refused to have sex until they got married.