Scarlett Byrne is an English actress and model best known for portraying Pansy Parkinson in the Harry Potter series. Moreover, she grabbed TV prominence with her works as Lexi in TNT television series Falling Skies (2014-15), and as Nora Hildegard in CW television series The Vampire Diaries (2015-16).

She has been married to late Hugh Hefner's son Cooper Hefner with whom she shares a daughter.

A Native Of London- What Is Scarlett Byrne's Age and Height?

Born on October 6, 1990, in Hammersmith, London, England, the UK, Scarlett's birth name is Scarlett Hannah Byrne. Little is known about her family background & academics, An English by nationality, Scarlett has Irish descent from her father's side.

With TV debut from the short-film, CryBaby, in 2005, Scarlett was off the screen for 3 years before guest-appearance in the series Doctors (2008).

Although she auditioned for Luna Lovegood in Harry Potter and the Order of the Phoenix (2007), it was until 2009, when Byrne was cast as Pansy Parkinson in the 6th installment of the film series, Harry Potter and the Half-Blood Prince, starring Daniel Radcliffe, Emma Watson, and Rupert Grint. 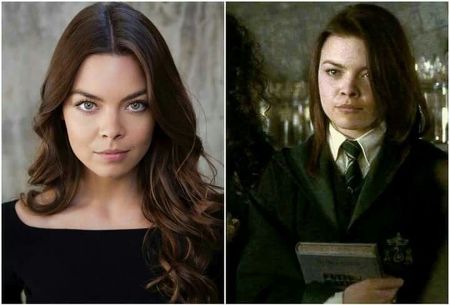 Further movie works of the English actress include Lashes (2014, short), Skybound (2017) alongside Gavin Stenhouse, and Stick and Poke (2019, short).

TV Series- Worked In 'Falling Skies' and 'The Vampire Diaries'

Thanks to Scarlett Bryne's acting acclaim & stints in the Harry Potter film series, she got exposure on TV screens as well.

From 2014 to 2015, the English appeared in 13 episodes of Falling Skies; there she portrayed Alexis "Lexi" Gla s s-Mason, the main cast in Season 4 & in a guest role in Season 5, alongside Noah Wyle, Moon Bloodgood, and Drew Roy.

Then, she appeared as the recurring cast Nora Hildegard in Season 7 of the supernatural teen-drama series The Vampire Diaries (2015-16, 12 episodes), featuring the likes of Nina Dobrev, Paul Wesley, and Ian Somerhalder.

Most recently, Byrne played the role of Bronwyn in Marvel’s Runaways (5 episodes) in 2019.

What Is Scarlett Byrne's Net Worth?

Currently, in her 30s, Byrne is a professional in the acting industry since 2005, and her decade-long career with a promising on-screen venture grabbed her a substantial amount of money. As of March 2021, Scarlett has a $1 million net worth- thanks to her film works as well as TV ventures.

Scarlett Byrne's acting credits count 14 at the moment, it's probably quality projects over quantity that marked her a considerable fortune. The Harry Potter film series, based on J.K Rowling's book of the same name is a commercial hit; check out the box-office collection of the films where Scarlett made a notable appearance:

Moreover, from TV works in Falling Skies and The Vampire Diaries, the actress allegedly summed up tens of thousands of dollars-an-episode but never opened up the actual figure of her payroll.

Married to Scarlett Hefner & Mother Of A Child

Scarlett Byrne has been married to boyfriend-turned-husband Cooper Hefner, who is a businessman and the son of late Playboy magazine founder Hugh Hefner, who pa s sed away in September 2017.

Byrne and Hefner started dating in 2015 and announced the engagement in August, the same year. After four years of engagement, the couple married on November 4, 2019. The duo announced in March 2020 via Instagram that they are expecting their first child together. On August 24, 2020, they welcomed a daughter Betsy Rose Hefner. Currently, the family of three lives in Los Angeles.

Time often, Byrne shares pictures with her husband & daughter on her Instagram (@scarletthefner) with over 355K followers in 2021. She is active on Twitter (@ScarleyByrne) as well, joined in March 2011 & has over 83.1K followers.

The brown-haired beauty with hazel eyes maintains her physique quite well. She has a curvy figure & her body measurement reads 31-22-33. She weighs 52 kg.