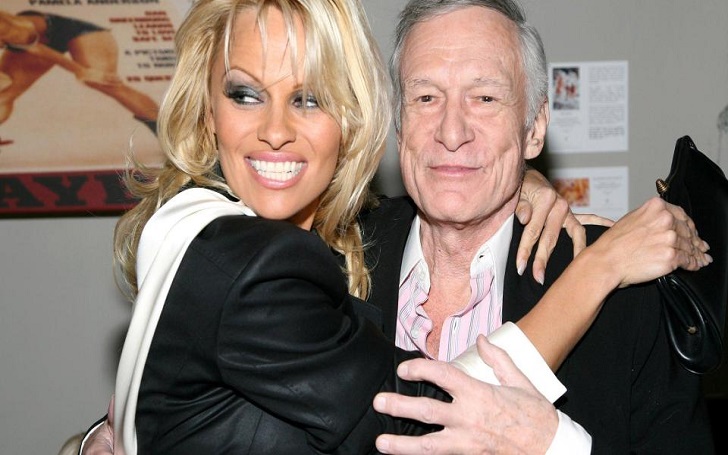 Hugh Hefner has died at the age of 91. He was the founder of Playboy magazine and star of Girls Next Door, the reality show on E!. Since his death many noted stars and Hefner's former flames have come forward expressing their grief. Pamela Anderson is mourning Hefner's death her way, posting a video of her crying on Instagram.

Pamela Anderson began in 1989 and ended her Playboy Journey in 2016 with the final issue that had fully nude women featured. Anderson shared a video on Instagram  on Thursday morning where she is crying and wiping her teary eyes whispers, '' Goodbye Hef.'' The video message she shared on Thursday morning came with an emotional message:

I have so many thoughts, I have no brain right now to edit,” she wrote. “I am me because of you. You taught me everything important about freedom and respect. Outside of my family. You were the most important person in my life.

The actress/model continued her tribute to Playboy founder Hefner saying, “You gave me my life… People tell me all the time That I was your favorite…I’m in such deep shock.”

Anderson also wrote that the last she saw Hefner, he was using a walker, but he had shown her a piece of paper with her name in a heart around it that he pulled from his pocket. She ended her heartfelt tribute with ''Your Pamela *red lips emoji*''

The next to speak out on Hefner's death was Bridget Marquardt, Hefner was her ex-boyfriend and former star of Girls Next Door. The 44-year-old model took to Instagram to post her picture with Hefner that came with the following message:

“So sad but forever grateful for all the wonderful memories and amazing experiences #RIPHef #Playboy.''

So sad but forever grateful for all the wonderful memories and amazing experiences #RIPHef #Playboy  pic.twitter.com/RkHje7h0Un

Marquardt was 29 when she moved into The Playboy Mansion. She was featured on E! reality show Girls Next Door with Kendra Wilkinson and Holly Madison, from 2005 to 2010. The reality show broadcasted the lives of the playmates and their connection with Hefner inside of the mansion.

Barbi Benton, also Hugh Hefner's ex-girlfriend, however, hasn't come forward with an official tribute or a post dedicated to the now deceased ''Playboy.''

Kim Kardashian also paid her respects to Hefner, after his death via a tweet. Her Tweet read:

RIP to the legendary Hugh Hefner! I’m so honored to have been a part of the Playboy team! You will be greatly missed! Love you Hef! Xoxo

Hefner passed away peacefully on Wednesday. He died of natural causes at his home, The Playboy Mansion, surrounded by family and loved ones.