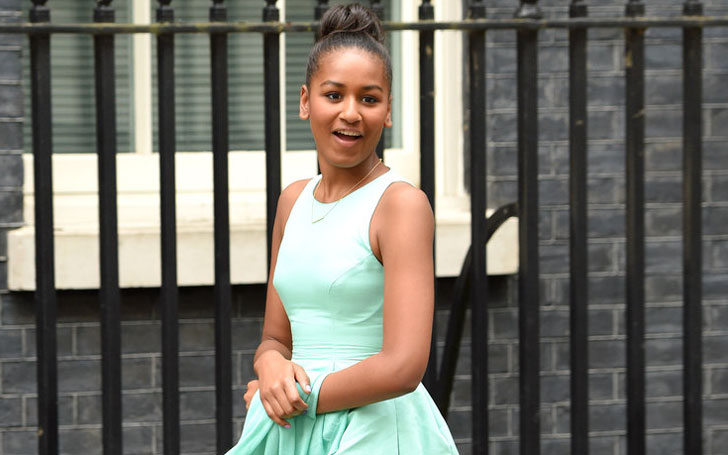 When you are the daughter of the 44th President of the United States of America, Barack Obama, it is definitely hard to ignore the limelight.

It hasn't even been a day that the former president's first daughter, Malia's bizarre dancing went viral on media, Obamas are already trending again. And this time, it is the youngest Obama, Sasha Obama.

Sasha whose real name is Natasha was recently caught kissing a mysterious guy allegedly named Matt at the Lollapalooza musical concert. Are they dating? We have all details here.

Sasha Obama Spotted Kissing a Mysterious Guy, Are they dating?

Barack Obama‘s Youngest daughter Sasha Obama who is 16 years old has become the topic of news and entertainment media likewise after she was recently spotted kissing a mysterious guy. Sasha shared the hot PDA with a guy allegedly named Matt at a Lollapalooza musical concert. Sasha who appeared in the concert with her sister, Malia Obama, was caught chatting with the mysterious guy, but their conversation soon turned into a romantic making out session.

Snapchat post: Sasha Obama and Matt getting cozy at concert

The news went viral after an eyewitness shared a picture of them getting cozy on snap chat. The picture was captioned: “Matt gonna get Sasha Obama.”

On the another snap chat post, the eyewitness shared a picture where Matt and Sasha were kissing each other passionately. However, it isn't confirmed that Sasha is dating this guy.  In the same event, Malia was also spotted dancing bizarrely.

As the daughter of the former President Barack Obama, Sasha is always in the limelight. Earlier this year, she grabbed the attention of media when she flashed her curves in Bikini In Miami. The news doesn't seem to stop for Sasha as her love life has become the hot topic now.

Though she was romantically linked to many guys, several times, Sasha hasn't confirmed anyone as her boyfriend officially. Back in 2015, a picture of Sasha and her homecoming date went viral on Twitter. Sasha was said to be allegedly dating the unnamed teen boy back in 2015.

Sasha Obama with her homecoming date

The tweet was first shared by @teethagoddess who shared the teen boy as her cousin. She wrote

However, the picture has been deleted by now.

Barack once said in an interview with Raleigh radio station in November 2016 that he is relaxed regarding his daughters' dating life. The first reason is his wife, Michelle. He explained:

She’s such a great example of how she carries herself, her self-esteem not depending on boys to validate how you look or you know, not letting yourself be judged by anything other than your character and intelligence.

Just because Sasha is going out and having fun, this doesn't make her a bad role model. She is just a regular teenager!

"The other reason is because they've had Secret Service. There's only so much these guys can do. These poor young men come by my house and…."

That's a fair point, it's going to be hard to date when you have secret service follow you around everywhere!