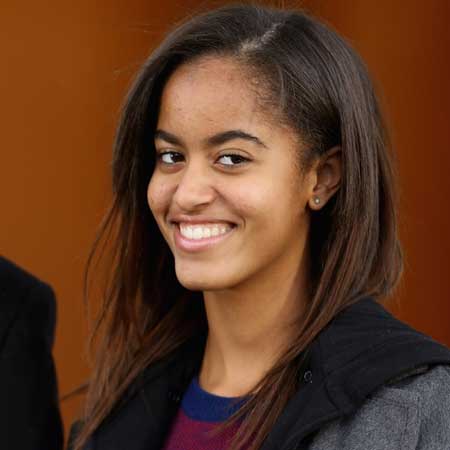 Malia Obama is a renowned personality. She is the eldest daughter of former U.S. President, Barack Obama and first lady, Michelle Obama. She is the tallest one in the Obama family.  Maila recently joined Harvard University for her graduation.

Malia Obama was born as Malia Ann Obama on July 4, 1998, in Chicago, Illinois, U.S. She was born to father, Barack Obama, and mother, Michelle Obama. She has a younger sister named Sasha Obama. She holds an American nationality belonging to the African-American ethnicity.

Malia's mother, Michelle was born on January 17, 1964. She is currently serving as a lawyer and was a vice-president at the University Of Chicago Hospital. She was the First Lady of the United States. Their immediate family was the First Family of the United States for eight years. The Obamas are the first "First Family of African-American descent."

Her father, Barack Hussein Obama II, was born on August 4, 1961, in Honolulu, Hawaii, U.S., has served as the 44th President of the United States for eight years. He is the first African-American politician to have served as president.

Malia alongside her younger sister attended the private University of Chicago Laboratory Schools in Chicago in early 2009. Both the sisters studied at the University until January of 2009. Later, they moved to the Sidwell Friends School in Washington, D.C., after their father became president on January 20, 2009.

Later, Malia attended the Harvard University, where she completed her further education. She was interested in filmmaking from her early days and has interned at HBO. She was also hired on television shows such as Extant (2014) and Girls (2015).

Malia attended the Sundance Film Festival in January. She was reportedly going to start an internship with the film producer Harvey Weinstein and the Tribeca Film Center.

Malia, age 19, is not married and is not spotted being involved in any affair for a long time. Her birth sign is Cancer. She currently resides in Washington D.C. with her family.

According to some sources, Secret Service agents detained a Brooklyn man who slithered into a Tribeca building, where former President Obama’s daughter Malia interned — and begged the 18-year-old to marry him.

Jair Nilton Cardoso showed up on the fourth floor of the building on April 10, held up a sign in an office window and loudly begged for her hand in marriage. The agents recognized Cardoso as a man who had repeatedly tried to get into the White House in the past.

Secret Service agents went to Cardoso's Brooklyn apartment and interviewed him on April 13. They concluded that he had psychiatric issues and took him to a Brooklyn hospital for evaluation.

Malia stands an unusual height of 1.8 meters (6 feet 1 inch). She is the tallest one in the Obama family. She is living a fabulous lifestyle, with her family.

Malia is active on social networking sites such as Instagram and Twitter but does not seem actively using her social accounts.