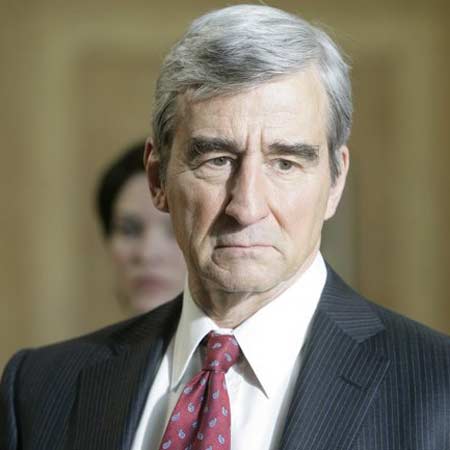 One of the inspirational actors of Hollywood, Sam Waterston is popularly known for his role, Sydney Schanberg in 1984’s movie The Killing Fields for which he was nominated for Academy Award. Waterston is also well known for his role, Jack McCoy in the NBC TV series, Law & Order. His performance in the series helped him to win Screen Actors Guild Award. Moreover, he has also been nominated for multiple Screen Actors Guild Awards, Satellite Awards, and Primetime Emmy Awards. Till the date, he worked in over 60 movies and TV Series. Active in the industry since last 55 years, is also involved in several charity works.

The actor was married to Barbara Rutledge Johns but divorced in 1975. The couple shares a child together, James Waterston. In 1976, he exchanged the vows with his second wife, Lynn Louisa Woodruff with whom he shares three children, Katherine, Elisabeth and Graham Waterston.

Sam Waterston was born Samuel Atkinson Waterston on 15th November 1940 in Cambridge, Massachusetts under the birth sign Scorpio. Waterston is the daughter of Alice Tucker, a landscape painter and George Chychele Waterston, an immigrant from Leith, Scotland and a language teacher. His parents raised him with his three siblings, two sisters, Roberta Waterston & Ellen Waterston and a brother George Waterston in New England.

Waterston attended a boarding school, Brooks School in North Andover where his father was a teacher and later joined Groton School in Groton, Massachusetts. He made his first stage appearance at the age of 7 in Jean Anouilh’s Antigone as Creon’s page which was directed by his father.

In 1958, Waterston joined Yale University in New Heaven on a scholarship from where he earned a Bachelor of Arts degree in 1962. Later, he joined Yale Dramat where he performed in several plays.  Initially, he tried to give up acting so joined the University of Paris. After some time, he started taking acting classes at the Clinton Playhouse and the American Actors Workshop by John Berry.

In 2004, Waterston received an honorary degree (Doctor of Fine Arts) from the University of South.

While attending acting classes at Clinton Playhouse, Sam Waterston performed in Waiting for Godot. Later, in 1962, he worked in the plays such as Oh Dad, Poor Dad, Mama’s Hung You in the Closet, and I’m Feelin’ So Sad at the Phoenix Theater.

Waterston then worked in Joseph Papp’s production of William Shakespeare’s Much Ado About Nothing as an award-winning Benedick. He received high critical acclaim for his performance in the play. Not only this, but he was also awarded from Drama Desk Award, New York Drama Critics Circle Awards and an Obie Award for his amazing performance.

Sam Waterston made his Hollywood debut in 1965 as Andy in The Plastic Dome of Norma Jean. Two years later, he came to prominence after appearing in Delbert Mann’s movie, Fitzwilly. The movie starred Dick Van Dyke, Barbara Feldon, and Edith Evans.

He then appeared in numerous movies like Warning Sign, Just Between Friends, September, Welcome Home, Mindwalk, Nixon, and Miss Sloane among others. As of 2018, he is working on the upcoming biographical film, On the Bases of Sex directed by Mimi Leder.

Waterston made his TV debut in 1965 from an episode of Dr. Kidare. He then worked in several TV movies and TV series. In 1991, he worked as Forrest Bedford in NBC’s drama TV series I’ll Fly Away with Regina Taylor, Jeremy London, and Jason London. His performance in the series helped him to rank #17 in TV Guide's ''Greatest TV Dads of All Time'' list.

CAPTION: Sam Waterston in one of the scenes of Law & Order. SOURCE: Hollywood Reporter

His breakthrough came in 1994 as Jack McCoy (Executive Assistant District Attorney) in NBC’s police procedural legal drama TV series, Law & Order. He shared the screen with Jerry Orbach, Mariska Hargitay, S. Epatha Merkerson and Dann Florek. He was associated with the series from 1994-2010 appearing in 368 episodes.

After the success of Law & Order, Waterston worked in the franchises of the show like Exiled: A Law & Order Movie, Law & Order: Special Victims Unit and Law & Order: Trial by Jury. Since 2015, he is working as Sol Bergstein (a successful divorce lawyer) in Netflix’s comedy web TV series Grace and Frankie with Jane Fonda, Lily Tomlin, and Martin Sheen.

Moreover, on 10th November 2006, Waterston worked on the 5,100th edition of Jeopardy! along with Kathryn Erbe and Christopher Meloni. He placed second after Meloni and received a $25,000 prize, which he donated to Refugees International and Oceana.

Sam Waterston after appearing in numbers of movies and TV series has been nominated for several prestigious awards. Some of his awards include:

Furthermore, Waterston received a Hollywood Walk of Fame in 2010, and two years later, he was also inducted into the American Theater Hall of Fame.

According to Celebrity Net Worth, Sam Waterston has an estimated net worth of $15 million whereas, as per The Richest, his net worth is estimated to be $35 million. Waterston earns a salary of $65k per episode from several TV series.

Waterston owns a house in Woodbury, Connecticut and also a summer house Mattapoisett, Massachusetts. In the early 1960s, he used to share a $25-a-month Greenwich Village apartment in New York City with his actor friend, Tom Ligon. In the past, he used to live in a house which was owned by writer James Thurber.

Moreover, he also contributed some amount to Ossoff’s campaign.

The famous actor, Sam Waterston has been married twice. Waterston was first, married to fashion reporter Barbara Rutledge Johns on 28th December 1964 at Branford College Chapel of Yale University. The reception was held at the bride’s parent’s house in Westport.

On 17th January 1969, the couple welcomed their first child, James Waterston, who is an established Hollywood actor in the present days. Waterston was married to Line Lillevik. Waterston and his wife could not maintain their relationship for long so divorced on 16th September 1975 due to irreconcilable differences.

Waterston tied the knot to his second wife, Lynn Louisa Woodruff (former model) on 26th January 1976 after dating for a year.

Waterston was a good friend of Bruce Lee. He is also a longtime friend of Mark Morris.

He is the spokesman for TD Waterhouse which is an online investment company. In 2003/2004, he appeared in most of the company’s TV commercials. He also appeared in TV commercials, print ads, TV commercials for The Nation, liberal magazine. In 2012, he supported Democratic President Barack Obama for re-election.

Here is the video where Sam Waterston talks about making of Grace and Frankie: