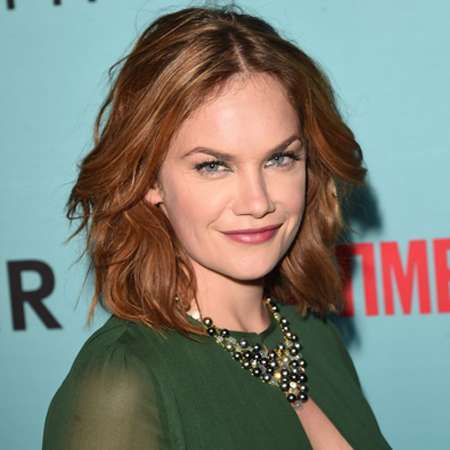 Ruth Wilson, the Golden Globe Award-winning English actress is a professional since 2003 and has garnered huge fame after playing Alice Morgan in the psychological crime drama Luther (2010- 2013) and Alison Lockhart in the Showtime drama The Affair (2014–2018). Already with 27 acting credits, the Ashford-born actress made notable movie appearances in The Lone Ranger (2013), Saving Mr. Banks (2013), and Dark River (2017).

Wilson was born 13th January 1982 in Ashford, Kent, as the daughter of Mary, a probation officer, and Nigel Wilson, an investment banker. Her grandfather Alexander Wilson is a novelist and MI6 officer. She was raised catholic alongside 3 elder brothers: Toby, Sam (a BBC journalist), and Matthew.

An English by nationality, Ruth hails from a mixed ethnic background; her great-grandmother was Irish.

She went to Notre Dame School, an independent Catholic school for girls, and then enrolled at Esher College. Ruth Wilson graduated from the University of Nottingham in 2003. Thereafter, she attended Nottingham New Theatre to study drama, followed by her time at the London Academy of Music and Dramatic Art (LAMDA), from where she graduated in July 2005.

During college days, at the age of 16, Ruth had a brief stint in modeling but focused on acting later. While an attendee at Nottingham, Wilson co-founded Hush Production with a couple of friends and acted in plays.

The English actress' TV debut came in 2006 when she played Jewel Diamond in Suburban Shootout (appeared in 10 episodes), followed up by a gig in Jane Eyre (2006) that got her Golden Globe Award nomination. Having appeared in 6 episodes of  The Prisoner (2009), Ruth got her major breakthrough to fame after she played Alice Morgan in BBC TV crime-drama series Luther (2010- Present) alongside Idris Elba, Steven Mackintosh, and Indira Verma.

Professional since 2003, the English actress record 27 acting credits; her acting career is the major source of her income. According to Celebrity Net Worth, Ruth Wilson owns a net worth of $3 million as of December 2019. Even though she is low-key about her salary, the Luther actress gets hands in hundreds of thousand of dollars.

The average salary of an actor in the United Kingdom earns £11.19 per hour.

After exit from the TV series The Affair, citing unequal and unfair payroll distribution, Wilson worked in Mrs. Wilson (2018) and currently works in the fantasy-drama series His Dark Materials as the main cast  Marisa Coulter; the series premiered on November 3, 2019.

Her upcoming project True Things About Me is under pre-production.

At the moment, no official report on Ruth Wilson's dating life or boyfriend is out. She is never married. However, The Affair actress was once in limelight for her relationship with Jude Law. The couple met in Anne Christie at the Domar Warehouse and began dating in 2012.

They remained together for 2 years until their break-up news hit the highlights in February 2014.

After that, the Luther star had a brief relationship with Jake Gyllenhaal in 2015. Meanwhile, she is allegedly single.