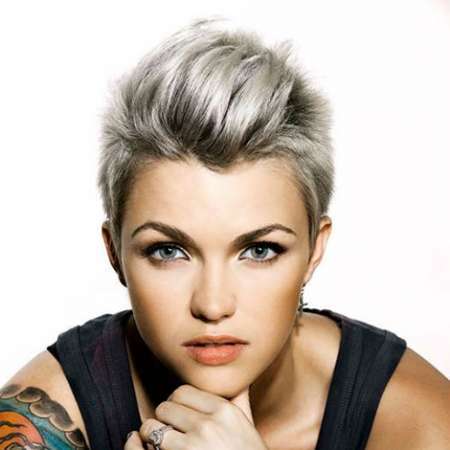 Ruby Rose is a model, record artist, actress, DJ, presenter and a VJ who rose into fame after being the presenter on MTV Australia. Her nationality is Australian. She is also the face of Maybelline New York in Australia and was born on March 20, 1986, to single mother, and artist Katia Langenheim. She has recently been on the spotlight after she and her girlfriend called off their engagement.

Born in Melbourne, she traveled many places like Tasmania, Surfers Paradise etc. before settling with her mother in Melbourne. She obtained her education from the University High School and also from the Footscray City College. She started a career as a model by joining the Girlfriend model search back in 2002. She also released a capsule fashion line next and opened a clothing range Faircloth Lane with her ex-fiancée.  She is also the face of Maybelline New York in Australia.

Rose has also co-hosted several television shows including The Project as well as Australia’s Next Top Model. Her acting career started in 2008 whereby she appeared in the film Suite for Fleur. She has also appeared in the drama Around the Block and has been internationally recognized for her appearance of Stella Carlin in the series Orange is the New Black. Her personal life somewhat overshadows her career but her role in the series has been liked and appreciated by fans around the world.

So far, Rose has worked in several famous movies where she has shared the screen with the stars like Milla Jovovich, Ali Larter, Keanu Reeves, and the likes.

Ruby came out as a lesbian, at the mere age of 12. She is said to have suffered several physical and verbal abuse from her schoolmates due to her sexuality. Rose publicly admitted being a victim of sexual abuse in her childhood. Moreover, she suffered from bipolar disorder and clinical disorder. This led her to attempt suicide and she had also been molested by a relative as a child. She suffers from bipolar disorder and says that she saved money to become a boy since she was a child. She discovered androgyny and used it in her modeling career.

Rose was said to be dating Veronica’s star Jessica Origlia s so. They, however, said that the rumors were not true. She was then reported to be dating the contestant of Australia’s Next Top Model Lola Van Vorst. She was also engaged to Lyndsey Anne McMillan but the two broke up their engagement. She was reportedly dating Catherine McNeil after they were spotted kissing in a pool party.

This versatile personality has a chic attitude, a perfect height of 5 feet 7 inches and a perfect body suited for modeling. She has been known to have a net worth of 2 million dollars allowing to her modeling as well as other endeavors.