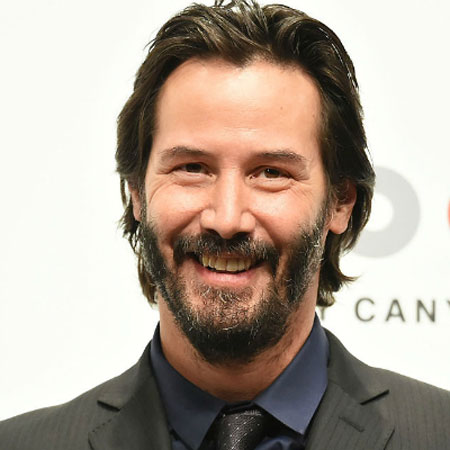 Famous for portraying Neo in the blockbuster trilogy The Matrix, Keanu Reeves is one of the legendary actors in Hollywood. Besides that, he is also a producer, director, and a musician. His other popular movies include Bill & Ted’s Excellent Adventure, Point Break, Speed, The Devil’s Advocate, and Constantine.

Reeves is a critically acclaimed actor and has received many awards including a star on the Hollywood Walk of Fame. The New York Times also praised him for his versatility and screen presence saying " he displays considerable discipline and range... he moves easily between the buttoned-down demeanor that suits a police procedural story and the loose-jointed manner of his comic roles".

Born on September 2, 1964, in Beirut, Lebanon, Keanu Reeves grew up in Toronto, Canada. He is the son of Patricia Reeves and Samuel Nowlin Reeves, Jr. His mother was an English whereas his father was an Asian-American geologist of Chinese and Hawaiian descent. He holds multiple nationalities: American, British, and Canadian and as far as his ethnicity is concerned, he has a mixed ethnical background.

Reeves' parents got divorced when he was 3-year-old and later on, his father was sentenced to ten years in jail for selling heroin at Hilo International Airport, in 1994. He last met his dad on an island of Kauai when he was 13.

Following his parents' divorce, Keanu Reeves moved to Sydney with his mother where she started working as a costume designer. Shortly thereafter, he shifted to NYC and his mom got married to a Broadway and Hollywood director Paul Aaron, in 1970 and divorced after a year.

Reeves’ mother married for the third time to a rock promoter Robert Miller in 1976 and gave birth to her third child, a daughter Karina. She got divorced again and married to hairdresser Jack Bon for the fourth time in 1994.

Reeves attended four different high schools within five years, one of them was the Etobicoke School of the Arts where he was expelled because he was "just a little too rambunctious and shot [his] mouth off once too often... [he] was not generally the most well-oiled machine in the school". He also attended De La Salle College and later Toronto School for the Performing Arts.

Keanu Reeves dropped out of the college when he was 17 and decided to pursue his career in acting. He was not good at studies and was more focused on sports.

Keanu Reeves started his professional career when he was 15, performing at the Leah Posluns Theatre in the stage production of Romeo and Juliet. Soon after that, he made his screen acting debut, appearing in CBC television’s episode Hangin' In.

In the early 1980s, Reeves went on to do commercials for big brands, including Coca-Cola, short films like One Step Away, and stage work like Brad Fraser’s cult hit Wolfboy. Besides, he also became correspondent for the Canadian Broadcasting Corporation TV youth program Going Great, in 1984.

Keanu Reeves first made his silver screen appearance in the drama film River’s Edge. He, later on, played the character of Ted Logan in the movie Bill & Ted’s Excellent Adventure, in 1989 where his comic timing was highly appreciated. He then featured in the lower-budget independent film, My Own Private Idaho opposite River Phoenix.

Reeves than appeared in Point Break alongside Patrick Swayze for which he received the MTV award for the Most Desirable Male. Continuing to play serious and meaningful characters, he went on to portray Jonathan Harker in a 1992 American gothic horror film Bram Stoker's Dracula alongside Gary Oldman, Winona Ryder, and Anthony Hopkins.

Reeves received a well-deserved popularity in Hollywood after starring alongside already established actress Sandra Bullock in the action movie Speed. The movie turned out to be a commercial success and grossed $350.4 million.

Keanu Reeves was also proposed to do Speed 2: Cruise Control but he didn’t agree even though he was offered around $11 million. He further appeared in an American romantic comedy film, Feeling Minnesota, in 1996. His role in the horror-drama film The Devil’s Advocate was appreciated which helped him to become popular at an international level.

Reeves’ major breakthrough came in 1999 when he portrayed Neo in the 1999 hit science fiction-action film The Matrix. The film received positives reviews and became commercially successful. He also featured in another two sequels of The Matrix, The Matrix Reloaded and The Matrix Revolutions.

Keanu Reeves’ further work included The Gift in 2000, The Watcher in 2000, Sweet November in 2001- a romantic drama starring Charlize Theron, a comedy movie The Replacements in 2000 and Something’s Gotta Give with Jack Nicholson. He played the role of Alex Wyler in a 2006 romantic drama film The Lake House alongside his Speed co-star Sandra Bullock.

Keanu Reeves' Net Worth And Height

Keanu Reeves’ estimated net worth is around $360 million at present. He has earned a huge sum of salary from his career as an actor.

His movie The Matrix was a huge success all over the world for which received $10 million and his salary was increased up to $35 million during The Matrix sequels.

The second and third part of the film earned a tremendous box office collection of more than $1.2 billion and he earned approximately $114 million. It is said that he donated $75 million to the special effects and makeup staff.

Some of his successful movies collection includes:

Keanu Reeves lives a lavish life. He purchased his Hollywood Hills house for $4.5 million in May 2013. The mansion features 4 bedrooms, 4 baths, and swimming pool. He also owns Porsche 911 Carrera 4S which he bought for $112 thousand.

Reeves stands at the height of 1.86 m (6ft.1 inch). He has won several awards and widely considered as one of the best actors to have never won an Academy Award.

He was first recognized in 1992 with an MTV Movie Award for the most desirable male for his role in “Point Break.” He also won MTV awards for the best on-screen duo in “Speed” in 1995 and best male performance and best fight (with Laurence Fishburne) in “The Matrix” in 2000.

Keanu Reeves is also known as one of the generous actors in Hollywood. He is engaged in several charity works. He formed a cancer charity and has also supported PETA, Stand Up to Cancer, and SickKids Foundation.

"Money is the last thing I think about. I could live on what I have already made for the next few centuries."

Reeves is a co-founder of a production company, Company Films which helped produce Hendry’s Crime. Besides, he is a longtime motorcycle enthusiast who co-founded Arch Motorcycle Company that builds and sells custom motorcycles.

In 2008, Paparazzo Alison Silva sued him for $711,974, claiming Keanu Reeves reportedly hit and injured Silva with a Porsche. The lawsuit took one and a half year to make it to trial. At the time, she continued to attack him and demand payment but he has never paid the amount.

Keanu Reeves, 53, is unmarried and does have not any children. Previously, he dated former Lost Highway star Jennifer Syme in 1998. His late girlfriend Jennifer was pregnant with his child and gave birth to a girl Ava Archer, in the year 200 but sadly she was stillborn.

Unfortunately, Jennifer was also killed in a tragic car accident just a year while she was coming back from Marilyn’s party in her Los Angeles house: She died instantly. In an interview in 2006, Reeves revealed his pain after losing Jennifer, he said:

“People have a misconception that you can deal with it and say, 'It's gone, and I'm better.' They're wrong. When the people you love are gone, you're alone. I miss being a part of their lives and them being part of mine. I wonder what the present would be like if they were here - what we might have done together. I miss all the great things that will never be. Damn it! It's not fair! It's absurd.”

Reeves eventually got engaged to Autumn Macintosh, in 2005. But, the love affair between them didn’t last long and they called off the engagement.