Meteorologist Maria Timmer Got Married To Reed Timmer At A Volcano-Details About Their Wedding Life and Pictures! 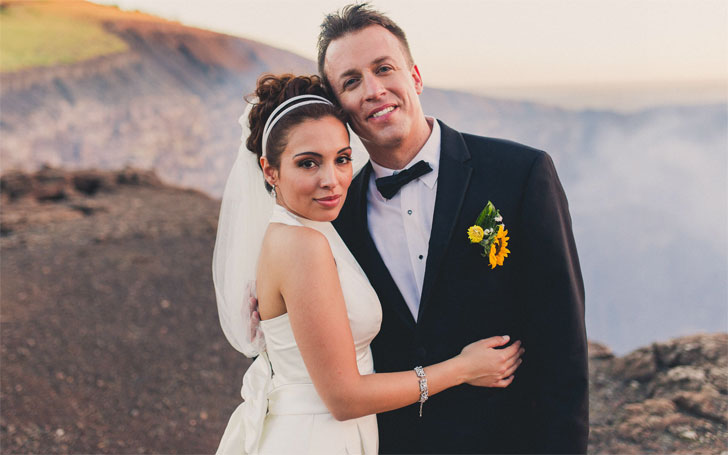 Most wedding pictures look alike- different couples and new settings but it's usually the same white gown, groom in a suit and wedding atmosphere. But, for the meteorologist Maria Timmer and her meteorologist and storm chaser husband Reed Timmer, things were quite different.

The meteorologist chose the top of Masaya Volcano in Nicaragua as their wedding location.So, the pictures were completely unconventional as well.

The former meteorologist for Fox News Channel, Maria who resigned from the network in 2016 to pursue her Ph.D. at Central Michigan University is happily married to her husband Reed.

Happily married couple, Maria Timmer and Reed Timmer are together since 2015. Since the couple shares the same passion for weather reporting, they first met while reporting a tornado in Mayflower, Arkansas in early 2014.

Maria Timmer and Reed Timmer in an event

After dating for about nearly a year, Reed popped the question and they got engaged in October 2014. Storm Chaser Reed shared the big news via his Twitter on 5 October 2014.

It really is true u know from the beginning! I'm so happy to announce @FoxMariaMolina and I got engaged on last chase pic.twitter.com/TkQwR3DNAl

Maria also shared a picture of them on her Facebook writing:

They say when you know, you know. I am so happy to share with you that we are engaged!

As both of them are weather reporters, the lovebirds also took a weather-related romantic photograph to commemorate their engagement. The pair took the beautiful underwater snap inside a pool at the Biltmore Hotel in Miami which was covered as a story on Fox and Friends.

After a year of engagement, Maria and Reed tied the knot in December 2015. The couple exchanged their vows on top of Masaya Volcano in Nicaragua which is one of the most active volcanoes in the Western Hemisphere. Maria Timmer and Reed Timmer in their wedding

The beautiful moment of their nuptial was captured by photographer Mike Olbinski. To capture the beautiful pictures, they made a trip of more than 4,500 miles to the Masaya Volcano in Nicaragua. What else can you expect when two hardcore meteorologists wed?

JUST MARRIED! photos from our wedding at the rim of active Masaya Volcano, including glow of magma. @ScienceByMaria pic.twitter.com/6PE5y3qIKD

After the ceremony, Reed shared  their wedding location:

Since we were brought together through a shared passion for extreme weather and nature, we agreed it was the perfect spot to get married. Even a dust devil hit the ceremony right as Maria started walking down the aisle.

Reed was previously in a romantic relationship with Ginger Zee who is a Rockford native and Good Morning America meteorologist. Zee is currently married to Ben Aaron.

Currently, Maria and Reed are in the second year of their married life. Let's hope the sky remains always clear as far as their marriage is concerned.