American television personality, Ginger Renee Colonomos aka Ginger Zee is the current television meteorologist for the weather program Good Morning America on ABC Channel. She is the weather editor for all the ABC News platforms. She previously worked as the weekend weather anchor for the network initially.

What's Ginger Zee's Real Name? What Is Her Ethnicity?

Ginger Zee's real name is Ginger Renee Zuidgeest. She was born in the year 1981 on January 13 in Orange, California. She got her name Zee from Gilligan’s Island by her father. He loved the show that helped him learn English so Ginger got the name of Zee.

Her father is Robert O. “Bob” Zuidgeest and mother is Dawn E. Zuidgeest-Craft. She has one younger sibling named Sean Jeffrey Zuidgeest.

Zee has graduated from Rockford High School in Rockford, Michigan. She has graduated with a Bachelor of Science in Meteorology from Valparaiso University. She wanted to be a meteorologist since the beginning which she had aimed to reach by the age of 30 in The Today Show.

She holds American nationality and her ethnicity is mixed. As of May 2022, her age is 41 and she has an average height of 5 feet 6-inch or 169 cm tall.

What Is Ginger Zee's Famous For?

Following her dream, after graduating from the college, Ginger started working for various media outlets such as WEYI-TV, WYIN-TV, WLAV-FM, WOOD-TV, and WMAQ. WMAQ is owned and operated by NBC.

While working in the WMAQ network from 2006-2011, she filled in the Today show as a guest and fulfilled her dream. She joined with ABC anchoring Good Morning America weekend on 2011 November 12.

Zee has occasionally appeared in ABC’s programs such as Nightline and ABC World News. Since December 2, 2013, she became the regular anchor of Good Morning America succeeding Sam Champion who joined with The Weather Channel and weather editor for ABC News.

Following her graduation, Zee worked for various media outlets such as WEYI-TV in Flint, Michigan, WYIN-TV in Merrillville, Indiana, WLAV-FM and WOOD-TV both in Grand Rapids, Michigan, WBMA-LD ABC 33/40 in Birmingham, Alabama as an intern under chief meteorologist James Spann, and WMAQ in Chicago, Illinois, an NBC owned and operated station. 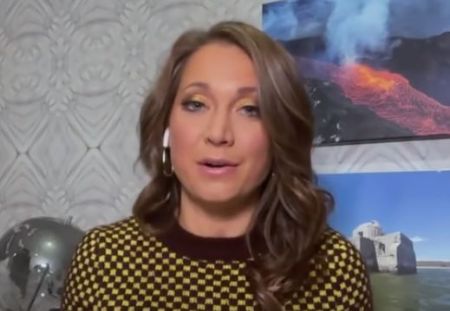 Zee is a talented and beautiful meteorologist. Since joining ABC News, she has covered many major weather events. She had covered the devastated Jersey Shore from Hurricane Sandy, Colorado floods, and wreckage from tornados in Moore and ElReno, Oklahoma.

She has covered the extreme weather conditions ranging from the cool blizzard of Boston to the Scorching heat of Death Valley.

Zee married to WNBC-TV New York personality Benjamin Aaron Colonomos who is known as Ben Aaron in the year 2014 June 7 in Petoskey, Michigan. They had engaged in August 2013.

Zee is known as Ginger Renee Colonomos after her marriage in her private life, away from the television. Zee is currently living a happy married life with her husband. There has been no news or rumors of her in love affairs, dating and having a boyfriend in the past. Ben Aaron has been the one and only for her.

The couple welcomed their first child, a son named Adrian Benjamin Colonomos, in December 2015, in Petoskey, Michigan. Zee announced on August 14, 2017, that she was expecting her second child with her spouse.

And the power couple welcomed a baby boy, Miles Macklin in Feb 2018. The family of four currently resides in New York. The average house price in New York is $779,000.

Being enormously beautiful and gorgeous, the 41 year old has been in the heart of many of her fans. Her fans can know about her by reading her biography in the wiki and on several other sites. Her pictures are found all over the internet.

Her fans can follow her on [email protected]_Zee and like her on Facebook to know more of her latest activities. She is also available on LinkedIn.