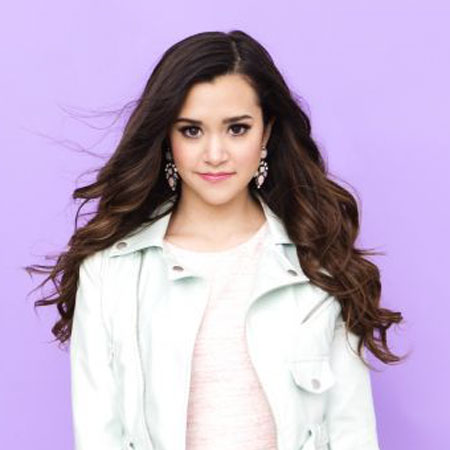 Megan Nicole is an American singer-songwriter and an actress who has gained massive followers for her cover song videos on youtube. Nicole discovered her vocal talent while messing around with her family's karaoke machine when she was about eight years old.

In 2015, Nicole was honored as one of the 50 most significant artists for her musical acts on 'YouTube Music Awards,' alongside Taylor Swift, Ariana Grande, & One Direction. She also sang her song 'Escape' during the ceremony.

Nicole was born to Frankie and Tammy Flores and has a younger sister, Madison. She discovered her love for music at an early age of 10 when her father bought her a karaoke machine. During the time, Nicole also learned to play the piano.

While at school, Nicole enjoyed singing in the choir. In her freshman year, she learned to play the guitar & joined the church band at Katy Community Fellowship.

Nicole went to Katy High School in her home city. However, after she became more involved in her music career, she had to drop out of school due to time constraints, she later started homeschooling.

In December 2009, Megan Nicole began her YouTube channel & posted her very first video, a cover of 'Use Somebody' by Kings of Leon. Soon after, she started to post cover versions of popular songs by artists including, Katy Perry, Bruno Mars, Taylor Swift Lorde, Rihanna, and Selena Gomez.

Nicole signed her first major deal with the American label, Bad Boy Records, in 2012 August. The founder of the record label, Sean “Diddy” Combs mentioned her as a complete package.

On 14th October 2014, Nicole released her debut EP, 'Escape,' that contained five new original songs. The EP also had a single 'Electrified,' which was released on 19th August 2014, followed by an 80's-inspired music video which was premiered on People.com on 16th September 2014.

The next year in September, Nicole starred in the musical movie Summer Forever with Alyson Stoner, Anna Grace Barlow, & Ryan McCartan. The film is based on her 2013 single of the same name.

Since then, Nicole has released some more covers, original songs & music videos on her YouTube channel. She is currently known as one of the top musicians on YouTube.

The 22-year-old YouTuber, Megan Nicole got engaged to her long-term boyfriend, Cooper Green in the New York City at the end of March 2017. The duo got married on 1st July 2017, after a few months of getting engaged.

Nicole was a shy kid; she felt uncomfortable even playing the piano in front of people. Singing in open mic shows, helped her overcome the fear of performing in public.

Nicole named her first guitar, Pawn Shop which her father gave her as a Christmas gift, as it was bought from the local pawnshop. Later, she traded it for another one, Nicole can be seen performing with the guitar on her first YouTube video.

Meghan Nicole posts cover of several other musical artists' songs on YouTube, aside from her own original work. She has earned a good deal of money from her YouTube Channel, her another major source of income is live shows.  As of  2017, Meghan Nicole's estimated net worth is around $2.5 million.