Marc Evan Jackson is an American actor who first came to stardom as a star in the American sitcom One on One in 2002. His other notable films and series include Kong: Skull Island, Jumanji: Welcome to the Jungle, Phil Lord, Christopher Miller's 22 Jump Street and The Good Place.

He is a Amherst Central High School Graduate

Marc Evan Jackson was born on August 21, 1970, in Buffalo, New York, under the birth sign Leo. He was raised with his two siblings, a brother and a sister in Amherst, New York.

Evan graduated from Amherst Central High School in 1988. He then attended Calvin College where he received a bachelor's degree with a major in philosophy and minors in political science and environmental studies.

Jackson holds American citizenship and belongs to the white ethnicity.

Marc Evan Jackson started his acting career with the role of a saucy chef in Garage: A Rock Saga in 2000. In 2002, he appeared in the American sitcom One on One. A year later, he starred in Bob Odenkirk's Melvin Goes to Dinner.

His other early films and series are The Slammin' Salmon, Last Comic Standing, and Super Dave's Spike Tacular. In 2012, Jackson was featured in Jay Chandrasekhar's The Babymakers along with Paul Schneider, Olivia Munn, and Nat Faxon.

The same year, Marc appeared in the police procedural comedy television series, Brooklyn Nine-Nine. In 2017, he starred as Shawn in The Good Place, as Steve Woodward in Kong: Skull Island and as Principle Bentley in Jumanji: Welcome to the Jungle.

In 2019, Jackson starred in the biographical drama film Bombshell and in the comedy series Bajillion Dollar Propertie$.

Marc Evan Jackson is Worth $1.5 Million

Marc Evan Jackson, 49, acc u mulated a handsome amount of money from his decade-long acting career. According to some reliable sources, his net worth is around $1.5 million, as of December 2019.

Jackson has been part of some hits projects which helped him to earn a substantial amount of money. He makes an average salary of $70,529 per month from his works in the entertainment industry. Here are some of his films and their budgets and box office collections.

Tied The Knot With Beth Hagenlocker

Marc Evan Jackson is a married man. He happily married Beth Hagenlocker on April 27, 2002, in a private ceremony in front of their closed ones. 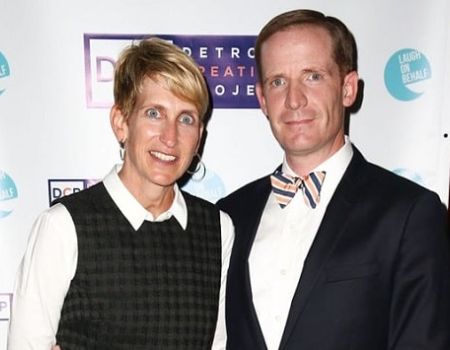 The couple currently resides in Los Angeles and enjoying a blissful married life.