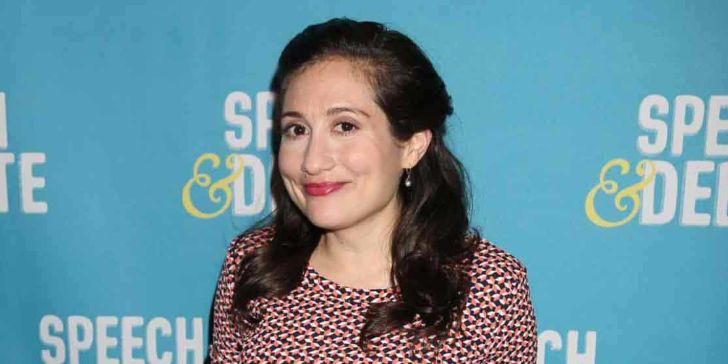 Lucy DeVito, an American actress along with her acting skills, came to fame as the daughter of successful Hollywood actors Danny DeVito and Rhea Perlman. Unlike other celebrity kids, DeVito didn't hop into acting as a child actor but turned professional in 2005 after graduating with a degree in theater. With the TV series Melissa & Joey (2010- 2012), Lucy proved her acting prominence & furthermore, appeared in notable roles in Alpha House (2014), Deadbeat  (2014- 2015), and The Marvelous Mrs. Maisel.

Moreover, the New York City-born has worked in commercially hit movies Jumanji: The Next Level (2019) and Dumbo (2019). With such an impressive portfolio as a celebrity child & as an inspiring actress, Lucy is barely away from the curiosity of fans on her personal life.

Lucy Chet DeVito was born on March 11, 1983, in New York City, New York, the USA. She grew up in Los Angels and Las Vegas. Her father Danny DeVito is an Emmy & Golden Globe-winning actor for his work in Taxi (1978- 1983) while her mother Rhea Perlman is famous for portraying head-waitress Carla Tortelli in the sitcom Cheers (1982-1993), winning 4 Emmy Awards.

How Did DeVito's Parents Meet?

Reportedly, Lacy Devito's father & mother met on January 17, 1971, when Rhea then- a struggling actress went to see a friend in the play The Shrinking Bride that featured Danny. Shortly after, they began dating & moved together following only 2 weeks.

After nearly 10 years of relationship, Danny and Rhea married on January 28, 1982. Together, the duo lived in 14,579 square foot Beverly Hills, California mansion bought in 199 until its sales for $24 million in April 2015. They share a residence in Malibu.and a bungalow near Rodeo Drive in Beverly Hills.

Separated But Not Divorced

Lucy's parents Danny and Rhea made highlights in October 2012 with their split after 30 years of marriage but reconciled in March 2013. But again, they split for the second time in March 2017, but are on good terms with each other ever since. Moreover, in an interview with Andy Cohen in 2019, Rhea Perlman stated about close friendship with then-husband Danny DeVito.

Although the duo is not living together, they don't intend to file for divorce.

After graduation from Brown University in 2005 at the age of 22, with a Degree in Theater, DeVito made her on-screen debut through This Revolution (2005) but was uncredited. Then, she made brief appearances in Crumbs (2006) and Dirt (2007), before earning notable acting acclaim in It's Always Sunny in Philadelphia (2006- 2007).

Throughout the 2000s & early 2010s, along with films Just Add Water (2008) and Sleepwalk with Me (2012), the American actress worked in short-films Speed Grieving, Poison Tongue, Nest of Vipers, and Guess Whom.

DeVito played Coat check girl in the 2019 fantasy adventure film Dumbo where her father Danny DeVito along with Colin Farrell and Michael Keaton worked. The film made a box-office collection of $353.3 million. Moreover, in the same year, Lucy worked in Jumanji: The Next Level (2019) as Maiden; the movie starred many Hollywood figures such as Dwayne Johnson, Jack Black, Kevin Hart, Karen Gillan, and Nick Jonas. Made on the budget of $125- $132 million, the Jumanji sequel collected $800.1 million in the box-office.

After her appearance as Anabelle in Marvelous and the Black Hole (2020), the American actress is working on her upcoming project Blonde (2021, under post-production) starring Scoot McNairy, Ana de Armas, Adrien Brody, and Sara Paxton. Based on the novel by Joyce Carol Oates, the biographical film chronicles the life of late American actress Marilyn Monro.

Is Lucy DeVito Married Or Dating?

'It's Always Sunny in Philadelphia' actress DeVito is never married or has announced plans to settle with husband or engagement anytime soon. Reportedly, Lucy does go on set-up as well as blind dates but never mentioned her boyfriend publicly. In a 2017 interview with Entertainment Tonight, Lucy DeVito confirmed herself single & even more stated that she doesn't reveal her last name during first dates.

Ever since no official report on the American actress' dating life or boyfriend is out, that leaves with online tabloid sources with a conclusion that she is allegedly single meanwhile. On her social media profiles such as Instagram and Twitter, Lucy often shares posts featuring adorable moments with her family. 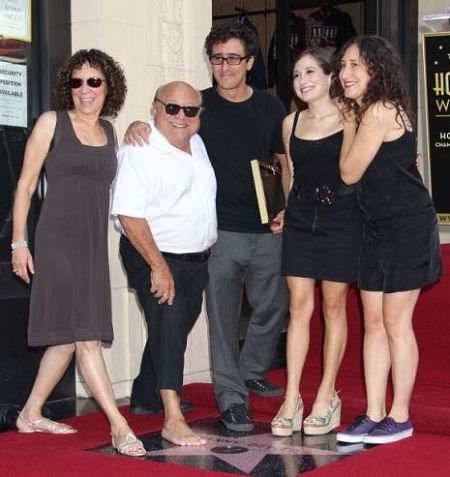 According to online sources, Lucy DeVito has a net worth of $18 million in October 2020. The eldest child of a Hollywood couple (now former) Lucy aside from parents shade of fame, got acclaim as well earnings through acting. Having worked in TV series: It's Always Sunny in Philadelphia, Melissa & Joey, and Deadbeat, DeVito earns a salary in a hefty 6-digit figure per year.

The Celebrity Net Worth reports that her father Danny DeVito owns an $80 million fortune, while mother Rhea Perlman is worth $50 million. Danny formerly co-owned a restaurant named DeVito South Beach in Miami Beach, Florida, before it closed in 2011.