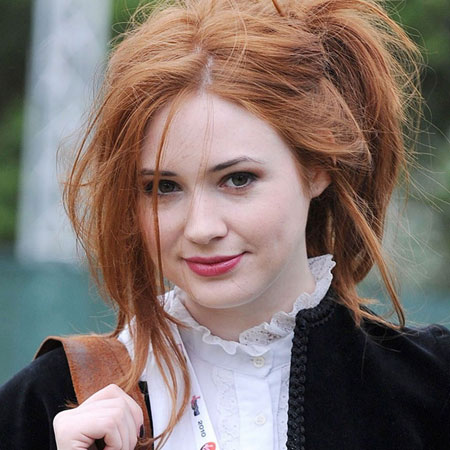 Best known for her National Television Award-winning role of Amy Pond in the hit British sci-fi TV series Doctor Who, Karen Gillan is a Scottish actress and former model. She listed #42 on FHM’s list of the 100 Sexiest Woman 2011. She is also notable for her work in Not Another Happy Ending and Jumanji: Welcome to the Jungle.

Gillan also worked as a model for several modeling agencies. With her prolific career, she has already established a good fortune.

Born on November 28, 1987, in Inverness, Scotland, Karen Sheila Gillan is the only child of Marie and Raymond Gillan, a singer and recording artist. She grew up in Inverness, Scotland along with her family. She belongs to British and Scottish nationality and ethnicity wise, she is Caucasian.

Gillan started playing the piano at the tender age of 7. As she grew up she developed a pa s sion towards acting and participated in a wide range of productions at her school, Charleston Academy. At the time, she also attended a number of youth theatre groups.

Gillan went on to study an HNC Acting and Performance course at Telford College when she was 16. After a couple of years, she moved to London to study drama at the prestigious Italia Conti Academy of Theatre Arts.

Prior to becoming a working actress, Gillan was also scouted by a modeling agency because of her towering height (5’11”), looks and distinctive red hair. She also appeared in runway shows and has done photo shoots too.

Karen Gillan started her TV acting career, making guest appearances in numerous drama series. Her first TV role was in an episode of Rebus. She then played multiple characters including celebs like Katy Perry and Angelina Jolie, in sketch comedy The Kevin Bishop Show.

Gillan portrayed leading character in The Well, a series of episodic short horror films for the BBC. She made her theatre debut playing the role of the John Osborne's play Inadmissible Evidence in October 2011.

In August 2011, Gillan was announced as one of the casts of the independent comedic film Not Another Happy Ending, directed by John McKay which premiered at the Edinburgh International Film Festival in June 2013. She was cast in the coveted character of Amy Pond, in the long-running hit British science-fiction television series Doctor Who, in May 2009. Gillan also won a 2012 National Television Award for her work in the series. For the role of Amy Pond,  she achieved superstardom and was mobbed by fans in several locations around the world.

In 2014, she played a lead role in ABC’s Selfie, but the series was canceled after one season. The following year, Gillan wrote and directed her first short film, Coward that premiered at the 2015 Edinburgh Film Festival. The short film was also nominated for several awards. In addition to her work in TV, she also featured in an array of movies, including the horror film Oculus (2013), Ending (2013), and the Marvel film Guardians of the Galaxy (2014).

Deadline announced in July 2016, the actress made an agreement to play the lead character in the upcoming indie drama, All Creatures Here Below. In 2007, she starred in Jumanji: Welcome to the Jungle alongside Dwayne Johnson, Jack Black, Kevin Hart, Nick Jonas and Bobby Cannavale among others.

In 2018, she will be appearing in All Creatures Here Below and Avengers: Infinity War. Gillan will also feature in the Avengers franchise in 2019, the movie is yet to be given a title.

The Scottish actress and former model Karen Gillan’s estimated net worth is around $2 million, according to Celebrity Net Worth, in 2018.

As a model, Gillan earned an average salary of $42k.

Some of Gillan’s successful movies collection.

2 Guardians of the Galaxy

4 Guardians of the Galaxy Vol. 2

6 Jumanji: Welcome to the Jungle

Karen Gillan has worked for several charity projects and organizations. She worked as a model to promote the global Fashion Targets Breast Cancer charity initiative.

She is an avid piano player and loves rummaging through vintage clothes shops.

Karen Gillan is yet to be married and has no child. According to some reputable online sources, Gillan is alleged of dating her co-star from Doctor Who,  Matt Smith. But, neither Gillan nor Smith has confirmed the rumor.

The alleged couple previously made headlines in 2012 when they both were shooting the hit TV series Doctor Who in New York. They once again sparked the rumor about their dating at the premiere of Oculus.

Gillan had an encounter with producer and actor Andrew Brooke, in 2012. The couple came into the spotlight when they were seen together, kissing pa s sionately during a night off from filming in Spain.

However, the pair split up after being together for a year. Gillan was previously in a serious relationship with British photographer, Patric Green. The pair began dating in 2006 and shortly after that, they started living together in London. They were spotted at various events together and enjoyed their time, traveling to many beautiful places. However, the relationship between them came to an end in 2012. She currently resides in New York City and Los Angeles, California. She is a good friend of Katee Sackhoff.