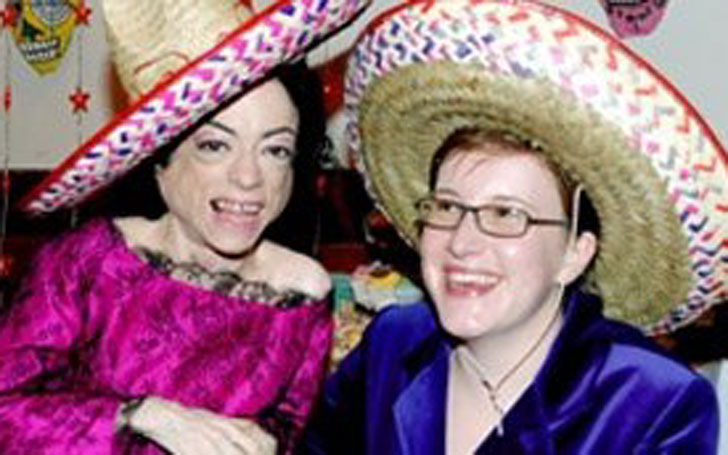 ‘’ I am not your Inspiration’’ says Liz Carr to 'The Guardian', Liz Carr is an actress, disabled activist, comedian, and in a wheelchair since the age of seven due to a rare condition called ' Cerebral palsy'. Liz is openly lesbian is and married to Jo Church, an author and like herself a disabled activist as well.

Jo Church is an author and a disabled activist like Liz. Unlike Liz, Jo isn’t physically impaired, but their relationship goes beyond such ‘’conventions’’. They have been happily married since 2010.

Even with the fact that they are a lesbian couple and one of them is in a wheelchair, their relationship still beats most of conventional; ‘’normal’’, relationships out there.  Liz and Jo are two happily married amazing women.

What Was Their Marriage Ceremony Like? When Did They Get Married?

Both Liz and Jo are two successful and remarkable women, it might seem vain to talk about their marriage instead of achievements. But cut me some slack here! I am obsessed with how cute their relationship is! So, let’s do this!

Liz calls her marriage to Jo a ‘Wheelie Wedding’ herself in an article she wrote for BBC. The wedding took place on the 1st of November in 2010.

She connects her marriage which she has to legally call a ‘Civil Partnership’ or CP to Cerebral Palsy, her medical condition. Since she is a lesbian and married Jo, a female, their marriage is legally called CP (civil partnership) in the UK. Liz says she thinks of cerebral palsy when people as her ‘’ how was your CP? Was it fun?’’

Apart from the legally sad fact, their wedding was in Liz's own words ‘’indeed fun’’. The decoration's theme revolved around the Mexican festival of the day of the dead. Liz mentions dreading the official couple dance.

She isn’t a great fan of social gatherings where people are asked to stand.

How Did Liz Carr's And Jo Church's Wedding Dance Go?

Since Liz is in a wheelchair and Jo isn’t, Liz mentions people probably anticipated Jo to go down on her knee and dance or hold her close and whisk her around.

Liz says in her wedding memoir/article for BBC Ouch!, that they filmed themselves dancing to "‘’Time of my Life’’ from Dirty Dancing in their dance classes and showed that instead of actually performing live in their wedding.

They recreated the iconic scene where Patrick Swayze picks up Jenifer gray above his head with a twist. They had a local fire brigade pick, Liz, in her wheelchair.

At least half of 170 guests in their wedding were disabled, the wedding’s seating planning as described by Liz was a ‘’logistical nightmare’’. Mexican food, margaritas, the day of the dead décor, and a sombreros-filled wedding came to a point where the newlywed was kept under a piñata for a shower.

Their blind friend assisted in hitting the target better to release abundant confetti as other guests couldn’t release more than a few confetti by pulling the ribbons. Liz describes the event as ‘’perfect end to a perfect day

Liz and her spouse Church have been sharing a loving relationship for a long time now. But, they have yet to have any child.

Now, let’s take a look at some adorable moments in this couple’s life (took the liberty to stalk their social media)

What’s The Recent News On Liz Carr And Jo Church?

#SilentWitness may have finished for series 20 but don't fret, if you need a fix then you can always ask #CouldClarissa? @BBCOne @EmiliaFox pic.twitter.com/VeFTebHeDd

The show is going on strong. First started in 1996, 20 series of the show has already aired till now and with good audience ratings.

Liz Carr is talking along with activism and comedy as well. Her project ‘Assisted Suicide: The musical’ made news as it was supposed to.

The musical focuses on the wrongful romanticization of euthanasia in art. It made a dig at movies like ‘Me and You’ for romanticizing euthanasia.

She received critical accolades for it. And she is pretty busy on Twitter laughing at Trump’s hate.

Donald Trump's press conference is the funniest/scariest thing you will see ... til the next one https://t.co/fYDts8I9VH

Jo Church is an author and disabled activist as well. She is seen supporting Liz in all her endeavors and promoting her on social media as well. More like sharing how proud and happy, she is of all Liz’s achievements.

What About The Gaffe Lorraine Kelly Made About Liz Carr?

During an interview about the 20 years of Silent witness where David Caves. was invited as well, Lorraine Kelly used an unfortunate combination of words ‘’funny bones’’ and then ‘’funny woman’’ to describe Liz Carr.

Liz Carr suffers from CP and is in her wheelchair since the age of seven. She laughed off the remark and added ‘’ that’s just my medical condition’’ in response to the funny bones remark.

When Loraine tried to correct herself by saying she was a funny woman, Loraine again laughed and added ‘’ in the right sense’’.