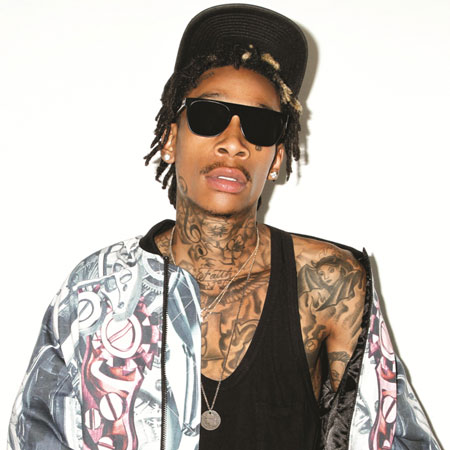 Cameron Jibril Thomaz aka Wiz Khalifa is one of the popular American rapper, singer-songwriter, and actor. Khalifa released his debut album, Show and Prove in 2006 which was commercially successful. He is best known for his single, Black and Yellow which ranked 1 on the Billboard Hot 100 and earned Billboard Music Award for Top New Artist in 2012. Apart from singing, Khalifa is also an actor. In 2012, he starred in Mac & Devin Go to High Schoo alongside Snoop Dogg.

He is a proud father of a son, Sebastian from his previous marriage to Amber Rose.

Wiz Khalifa was born Cameron Jibril Thomaz on September 8, 1987, in  Minot, North Dakota to Laurence Thomaz and Peachie Wimbush. Both of his parents served in the military and resided in many countries including Germany, UK, and Japan before settling in Pittsburgh. Khalifa was just 3 when his parents divorced. He attended Taylor Allderdice High School.

His stage name, Wiz Khalifa is derived from the Arabic word which means successor and wisdom. During an interview with Spinner.com, he stated; "The name also came from being called young Wiz cause I was good at everything I did, and my granddad is Muslim, so he gave me that name; he felt like that's what I was doing with my music."

He even tattooed his new name at his 17th birthday.

Rostrum Records' president Benjy Grinberg gave Wiz Khalifa his first opportunity in the music industry and when he signed him and began a 7 year period of artist development. The following year, he released his first mixtape, Prince of the City: Welcome to Pistolvania.

After working for two years, Khalifa parted ways with  Warner Bros. Records in July 2009. The reason behind his split was the numerous delays in releasing his planned debut album for the label, First Flight. Then he launched his another single Teach U to Fly and the mixtape How Fly in association with Rostrum Records.

Wiz Khalifa released his 2nd album, Deal or No Deal in November 2009. After a year, he launched his free mixtape Kush and Orange Juice which became the No. 1 trending topic on Twitter with the hashtag #kushandorangejuice and became Google's No.1 hot search trends.

Khalifa refused to tour with rapper Drake in 2010 instead he launched his own Waken Baken Tour. His career skyrocketed after his single Black and Yellow. It peaked at number one on the US Billboard Hot 100.

In 2011, he released his first studio album, Rolling Papers in the US and it reached no. 2  on the US Billboard 200 chart. The album succeeds to made a  first-week sales of 197,000 copies in the United States. He won Best New Artist at the BET Awards of 2011.

Wiz Khalifa launched his second album  Only Nigga In First Class in 2012 which was abbreviated as O.N.I.F.C. and it debuted at no.2  with 131,000 in first week sales. He worked with artists like Juicy J, Miley Cyrus for his album, Blacc Hollywood in 2014. Then he worked with Ty Dolla $ign.

In 2015, Khalifa released the song See You Again along with Charlie Puth which was a tribute to Paul Walker, who died during filming Furious 7. The single is one of the most watched videos on YouTube with more than 3.5 billion views. He launched his next album, Khalifa in February 2016. The next month he launched "Pull Up," an album, Rolling Papers 2. His most recent released single is Captain.

Khalifa mostly earns from his concerts; he makes more than $100k from each show. Most of his hip-hop acts tend to gross $2k-$3k per head in every show. Besides the contract amount, he earned $10 per piece from rolling paper albums and sold certified gold for shipment of over 500,000 units.

Khalifa is very addicted to marijuana and he spends $10k per month on weed alone. He has his own official 420 kit which includes herb grinder, rolling papers, and baggie which cost $42.

In 2016, Khalifa sued former manager Benjy Grinberg and Rostrum Records because of unfair signed in 360 deal for $1 million.

In 2012, Khalifa purchased a customized house in Canonsburg, Pennsylvania at $900k  located at 2.8 acres of land along with a guest house. He also owned a luxurious mansion at Coachella costing $10 million. The house located at 7000 square foot along with seven bedrooms. The house was built in 1950 which is designed by famed architect William Pereira.

Khalifa is quite fond of car collection as he has many branded and luxurious cars. He has 2010 Dodge Challenger costing $30k which he named Charlie. In addition to his collection, he owned Rolls Royce Ghost-$200k,  Porsche 991-$132k.

As of 2018, Wiz Khalifa is possibly single, but previously he married model and actress, Amber Rose. The duo started dating in early 2011 and engaged on March 1, 2012. After a year, the duo exchanged a vow on July 8, 2013, at an intimate ceremony.

"I and Amber got married today. Weddings this fall. Thought I'd let yall know."

"Yay me & my Baby are officially married!!!"

The couple is blessed with a son, Sebastian Taylor who was born in 2013. The duo divorced on September 24, 2014, citing irreconcilable difference. They have joint custody of their son.

Khalifa also dated Brazilian based makeup artist, Izabela Guedes in 2017. The duo often spotted together at public places before their official break up.

In 2010, Khalifa featured on the cover of XXL magazine which listed him as one of the Top 10 Freshman. He also named 2010 Rookie Of The Year by The Source.

Wiz Khalifa was arrested for possession and trafficking of marijuana during his Waken Baken tour in 2010 at East California University. Though he was released next morning, he had to pay the fine of $300k.

In 2016, Khalifa and Kanye West had a Twitter Feud after West teased his album Waves. Their argument hit when Kanye started mocking Khalifa's personal life as he threw some major shade at Wiz'e ex-wife, Amber Rose, and son, Sebastian. Later, West apologized to him but in an interview, Khalifa revealed he hasn't forgiven him. He said,

"I wouldn't necessarily say it's squashed though because when you see him talk about it, it doesn't add up to what he said to me on the phone, so I just don't even trailing off."

Wiz Khalifa sued the former manager Benjy Grinberg and Rostrum Records in 2016 because of a 360 deal. He said, the deal which he signed was unfair, and for a compensation, he asked $1 million as well as punitive damages and attorney fees. After the incident, Khalifa and Gringberg split their 10 years long partnership.

In August 2017, Khalifa was dragged into controversy after the prominent Ole Miss alumnus; Ed Meek referred to his song as baseless. The same year, during his concerts in Medellin, Colombia he visited the Pablo Escobar's grave and left flowers and a joint at Escobar's tomb. Public and media highly criticised the incident.