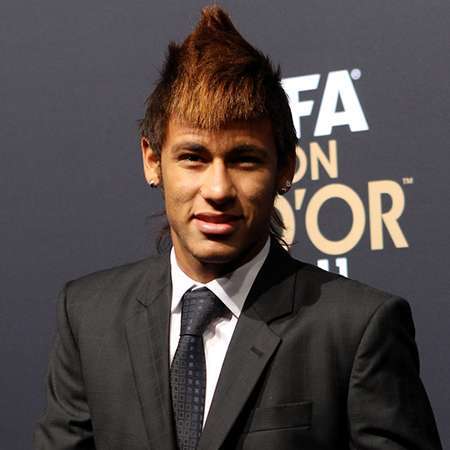 Neymar Da Silva Santos Jr, popular as Neymar Jr. or Neymar, is a Brazilian professional footballer. He rose to fame at an early age at Brazilian based football club, Santos making his professional debut at the age of 17. He has won several matches in his career.

He moved from Barcelona to Paris Saint-Germain for the transfer fee of $261.5 million dollars making him the world's most expensive player.

Neymar currently plays for League 1 club Paris Saint-German (PSG) FC and the Brazilian national team. He was one of the forwards of the Spanish club, FC Barcelona, from 2013- 2016.

Neymar has been included in Brazil's 23-man squad for the 2018 World Cup.

Neymar was born on February 5, 1992, in Mogi das Cruzes, Sao Paulo, Brazil. He is the son of Nadine Santos and Neymar da Silva Sr.

He inherited his name from his father, who was also a footballer. His father became his advisor as his talents started to grow.

He has commented on his father's role, "My father has been by my side since I was little. He takes care of things, my finances, and my family."

Neymar grew up combining his love of futsal with street football. He moved to São Vicente in 2003, with his family, where he started to play for the youth side Portuguesa Santista.

In 2003, they moved to Santos, where Neymar joined Santos FC. The family bought their first property, a house next to the Vila Belmiro, with the success of his youth career and added income.

At the age of 17, he signed his first full professional contract, was upgraded to the Santos first team, and started signing his first sponsorship deals.

Neymar kicked off his domestic career with the Portuguesa Santista youth club in 1999, and within a few years was one of the most highly regarded young talents in the country. Neymar joined the youth system of Santos FC at age 11.

News of his abilities spread to Europe, and he was offered the chance to continue his development with Real Madrid Football Club at age 14, but the Santos team's management reportedly convinced Neymar to stay by providing him with a large bonus.

That season he also made his debut for the senior national team and debuted a Mohawk-style haircut, which quickly became popular among younger fans. He emerged as a star for Santos FC as a teenager and became one of Brazil's most popular public figures.

Neymar was criticized for his play during Brazil's quarterfinals loss in the 2011 Copa America tournament. Although Santos won its third straight league title, the young star again was subject to criticism when Brazil lost the 2012 Summer Olympics gold-medal game to an underdog Mexico team.

On 27 May 2013, Neymar signed a contract with FC Barcelona for the transfer fee of €57 million and his release clause set at €190 million.

He was a key member for the 6-1 victory over PSG in the 2016-17 UEFA Champions League round of 16, scoring two goals and a s sisting the decisive goal of Sergi Roberto during the closing seven-minute sequence.

He moved to Paris Saint-Germain in August 2017. Barcelona announced that Neymar's legal representatives made a payment of €222 million ($261.07 million) to the club on August 3, 2017 (the most expensive transfer ever), equal to the release clause of his contract.

On 27 August 2017, FC Barcelona filed a lawsuit against Neymar, demanding for the return of the contract renewal bonus he received as well as €8.5 million in damages and an additional 10% for the arrears.

Also, Barcelona claimed they are owed money that Neymar received as part of a renewal bonus when he signed a new contract in 2016.

He currently plays as a forward for PSG and the Brazilian national squad. He debuted his international career representing Brazil in the 2009 U-17 World Cup, where he scored a goal in the opening match against Japan.

He scored his first hat-trick in the 2012 Summer Olympics. He scored a hat-trick on March 5, 2014, in a friendly against South Africa in Johannesburg.

He was named to participate with the Brazilian national squad in the 2014 World Cup, on 2nd June. He earned his 50th international cap in the opening match of the tournament against Croatia on 12th June, in Sao Paulo.

He became Brazil's joint-third highest scorer alongside Romario after scoring his 55th international goal in a 3-0 friendly victory over Austria.

Neymar drew attention for his impressive soccer abilities at a very early age. He is a Christian and follows the Pentecostal branch of the religion.

Neymar has a sister named Rafaella Beckran. His sister is a model who changed her surname from Santos to Beckran due to being a ma s sive David Beckham fan.

Neymar has a close sibling relationship with his sister Rafaella Beckran. He has cemented this platonic closeness by tattooing her face on his arm, while Beckran tattooed her brother's eyes on her arm. They both have posted their pictures together on Instagram and spending time despite the Brazilian forward's busy schedule.

He is unmarried but has a son named Davi Lucca with his former girlfriend, Carolina Dantas. He expressed his happiness publicly on the occasion.

He said, "I cried when I learned that I would be his father. At first, I felt fear. Then joy. It is a new responsibility and I am now enjoying it."

He later described the birth of his baby boy as: "2.8 kilograms of pure happiness" and also said: "Mother and baby are in good condition just after childbirth."

Neymar, however, is not in a relationship with Carolina. He had been dating a beautiful Brazilian actress named Bruna Marquezine but they called it off in February 2014.

Listening to music, reading books are some of his hobbies. He likes to spend his leisure time with his friends and his family. Neymar has been quoted as saying, "Everything in my life has happened very early, personally and professionally. I’m always learning; I have to."

Neymar has won many awards for his great and marvelous contribution to football. Neymar emerged as a full-blown star in 2010, helping Santos claim the league. Neymar made his senior debut for Santos in 2009 and lived up to the hype by earning the league's Best Young Player award.

Brazilian soccer prodigy Neymar lived up to big expectations by winning four consecutive Player of the Year awards by age 21.

In May 2013, Neymar announced he was making the leap to Europe with a transfer to FC Barcelona, a powerful club that featured superstar Argentine striker Lionel Messi and several members of the Spanish national team.

In 2011, the flashy forward produced what would be voted the FIFA Goal of the Year and led Santos to its first Copa Libertadores championship in 48 years.

Neymar's net worth is over €110 million, which is a rise from the €90 million figure reported prior to his record move to Paris. He is among one of the richest footballers in the world alongside Lionel Messi and Cristiano Ronaldo.

His current market value is €180 million which was increased from €100 million following his transfer to PSG.

According to the news, Neymar will earn £55 million per year as per the contract with PSG. He also earns £12.2 million per year from endorsement deals with various companies like Nike, Konami, and L'Oreal.