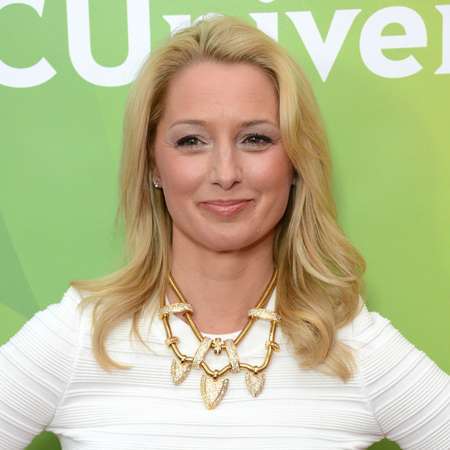 Katherine LaNasa, an American actress/former ballet dancer and choreographer, is known for appearing in several movies and television shows. She has enacted in numerous films and drama series like Three Sisters, Two and a Half Man, NYPD Blue and CSI: Crime Scene Investigation.

Regarding her personal life, LaNasa is married three times. She is currently living with her third husband, Grant Show with whom she shares a daughter. Moreover, she also has a son from her first husband.

Katherine LaNasa was born on December 1, 1966, in New Orleans, Louisiana, the United States under the birth sign Sagittarius. She was the daughter of Anne and Dr. James J. LaNasa, Jr. Her father was a surgeon whereas her mother was home wife.

Moreover, her parents raised her in Louisiana. According to her nationality, she is American and as far as her ethnicity is concerned,  she is white.

Regarding her academics, LaNasa attended North Carolina School of the Arts in Winston-Salem, North Carolina as she was very pa s sionate about her dancing. In 1989, she worked with John Carrafa as a s sistant choreography for the film Rooftops.

Katherine LaNasa started her acting a career from 1990 movies Catchfire, where she appeared as Waitress. In 1992, she appeared in the television movie The Heart of Justice and in Brain Donors.

In 1996, she appeared in many films including Shattered Mind, Always Say Goodbye, The Destiny of Marty Fine and Kiss & Tell. In 2008, she acted in American movie The Lucky Ones.

In 2010, she made her appearance in the movie entitled Valentine's Day as Pamela Copeland. In 2012, she appeared in the movies Jayne Mansfield's Car and The Campaign. In 2013, Katherine appeared in The Frozen Ground.

Check out this article about #Imposters coming to Bravo & @liayn_themovie http://www.theadvocate.com/baton_rouge/entertainment_life/movies_tv/article_3f9d9ae0-d918-11e6-8558-4fbd6860e2e7.html?sr_source=lift_amplify

Katherine has also been an active actress in televisions; she made her debut in the television from 1994 American series Under Suspicion. From the date of her debut she has also acted in many popular series like The Big Easy (1996), Pensacola: Wings of Gold (1999) and Two and a Half Men (2006-2011).

Katherine LaNasa's current net worth is $5 million. She earns a huge amount of money from her films and television series. She used to receive a salary of $35000 per episode from her previous series Two and a Half Man.

Moreover, she has a lavish home at Venice bungalow in New Orleans.

Katherine LaNasa is a very beautiful lady, she has been in a relationship with many guys in the past and she has been married three times.

LaNasa was married for the first time with actor Dennis Hopper when she was 22. They married in June 1989 in private events. And after three years of marriage, she had a divorce with her spouse in 1992. Before separating, they share a son.

Similarly, she was married for the second time with comedic actor French Stewart. She was married to his boyfriend on May 19, 1998, and they first met on 1996 episode of 3rd Rock from the Sun.

They later divorced in 2009. After their divorce, she was in a relationship with actor Grant Show and engaged in 2012. After a month of their engagement, the couple wed on August 18, 2012. The couple is living a happy life together without any divorce rumor.

Regarding her children, she has a son named Henry Lee Hopper who was born in 1990 from her first marriages. LaNasa has a four-year-old daughter, Eloise McCue born on 21st March 2014 with her current husband Grant Snow.

Check out the interview with Katherine LaNasa: