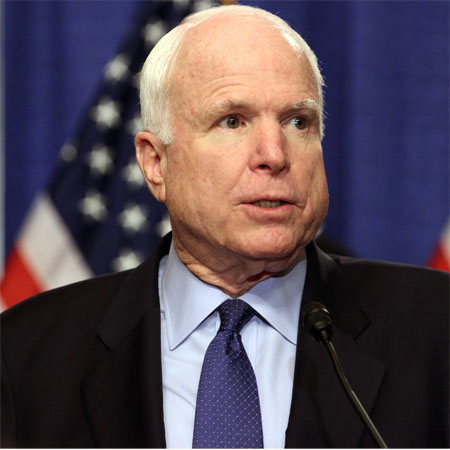 John Sidney McCain III (born August 29, 1936- 25 August 2018) was an American statesman and former military officer who served as the United States Senator from Arizona from January 1987 until his death. He was the Republican Party’s nominee for the presidential election in 2008. He represented Arizona in the U.S. House of Representatives (1983-87) before being elected to the US Senate (1987-2018). He was also a published author. He co-authored several books with other prominent authors.

McCain had been married twice. He was married to Cindy McCain from 1980-until his death. He died due to a brain hemorrhage on 25 August 2018. His wife Cindy McCain announced his death news on her Twitter. He was diagnosed with brain cancer in July 2017 and died in his family house in Arizona, US.

John McCain was born on August 29, 1936, at Coco Solo Naval Air Station. He was the son of naval officers John S. McCain Jr. and Roberta McCain. John’s grandfather was also in the United States Navy. He had two siblings, an older sister named Sandy McCain and a younger brother named Joe McCain. He belongs to Scots-Irish and English heritage.

Because of the various postings of his father, his family had to move to different locations and therefore has attended about 20 schools to complete his education. Finally, the family settled in Northern Virginia in 1951 and John McCain became a regular student of Episcopal High School, a private High School from which he graduated in 1954.

Following the footsteps of his father and grandfather, he joined at United States Naval Academy, Annapolis. He became the lightweight boxer during that time and used to stand up against bullying.

He had a conflict with higher-ranking personnel and did not use to obey the rules for which he got low ranking in the university despite high IQ and was graduated from the Academy in 1958.

John belongs to American nationality and regarding his ethnicity, he is a White American.

John McCain was a naval aviator in the military, flying ground-attack aircraft from aircraft carriers. He was almost killed during the Vietnam War of 1967 USS Forrestal fire. He was on a bombing mission during that time and his aircraft was shot down.

John got a serious injury and was captured by North Vietnamese. His wounds were not treated and he was constantly interrogated and beaten by the backside of the rifle. His war wounds have left him with some lifelong physical limitations.

In October 1967, his bombing mission, his A-4E Skyhawk was attacked over the North Vietnamese capital, Hanoi. He broke both arms and one leg and was held captive in Hoa Lo Prison or ‘Hanoi Hilton’. After seeing future in politics, he retired from the Navy in 1981 on the rank of a captain.

John McCain retired from the Navy as a captain in 1981 and began to make plans o run for Congress. In 1982, John ran as a Republican for an open seat in Arizona’s 1st congressional district. With the support of local political endorsements, money, and his Washington connections, John won the election.

In 1983, he was elected as the incoming group of Republican representatives and was assigned to the House Committee on Interior Affairs.

In 1987, John McCain defeated his Democratic opponent Richard Kimball and became the Senate of United States from Arizona. John McCain became the U.S Senate from Arizona for the sixth term and within the regime, he became a member of several influencing committees and also made headlines for his works.

In 2000, John McCain gave his candidacy for U.S. presidential election but he was defeated by the leader of the Republican nomination George W. Bush. Later in 2008, he again nominated his candidacy to run as a President of the United States but the election was won by Barack Obama.

He served as the Chairman of the International Republican Institute, from January 1993 until his death in 2018.

McCain returned to the Senate, where he continued to play a prominent role. In 2013, he became part of the gang of eight groups of Republican and Democratic senators. In 2014, McCain became the chairman of the powerful Armed Services Committee.

John McCain had $16 million net worth during his death (as of August 2018), according to Celebrity Net Worth. But the real money perhaps the reason the family has too many homes to keep track of-comes from Cindy McCain.

The US Standard US Senator’s salary is $174,000, and McCain received more than $73K from his Navy pension in 2015. He had earned over $1.7 million in revenue from selling his numerous books.

He was Captain when he retired from the U.S. Navy. So, he received annually $7300 as his pension. McCain is also an avid writer and collects good cash as royalty from his published books every year. He also donated over $1 million to several charity organizations.

McCain had in a beautiful home bought by him and his wife. In 2008, in an interview, they told their 15-acre ranch valued at more than $1 million. His primary residence was in a condo in a 12-story glass building in downtown Phoenix. He reportedly paid $4.67million to buy the apartment in 2006.

He also founded a charity John and McCain Foundation which donated a huge amount to numerous charity events.

In July 2017, McCain underwent a procedure to remove a blood clot from above his left eye at the Mayo Clinic Hospital in Phoenix. After undergoing his first round of chemotherapy and radiation in mid-August, he announced that he would continue working at the Senate between treatment stints.

In December 2017, it was revealed that McCain had been hospitalized for a viral infection and was heading home to Arizona for treatment.

Although he expressed hope that he would return to the Senate early the following year- McCain’s recuperation continued well into spring 2018. On 24 August 2018, the McCain family announced the Senator would forgo further treatment for his cancer. He passed away at the age of 81.

They began dating and urged his first wife Carol for divorce. Carol accepted the divorce with the settlement of two houses and financial support to support her ongoing medical treatments caused by the accident.

Soon after the divorce in April 1980. A month later, John McCain married Cindy in May 1980. They signed a prenuptial agreement that kept most of her family's assets under her name. They kept their finances apart and filed separate income tax returns.

Their eldest daughter Meghan McCain is a former Fox News contributor and current co-host of The View. She is one of the popular journalists in Fox News.

Cindy Hansen (McCain) is a businesswoman, philanthropist, and humanitarian. She is the chairperson of Hensley & Co. - one of the largest Anheuser-Busch beer distributors in the United States. She is the daughter of former beer distributor Jim Hensley.

She became a chair of the company after her father’s death in 2000. She is also involved in numerous charity organizations like CARE, HALO Trust, and the Eastern Congo Initiative.

He initially married Carol Shepp who was a model and mother of two sons, from Philadelphia in 1965 and John adopted her two sons after the marriage. John McCain returned to his family in 1973 after being a prisoner of war.

His wife suffered from a crippling ordeal due to an automobile accident in 1969. He became the commanding officer of a training squadron stationed in Florida. During his period in Florida, he had an extra-marital affair due to which his marriage began to falter. The couple divorced in 1980.