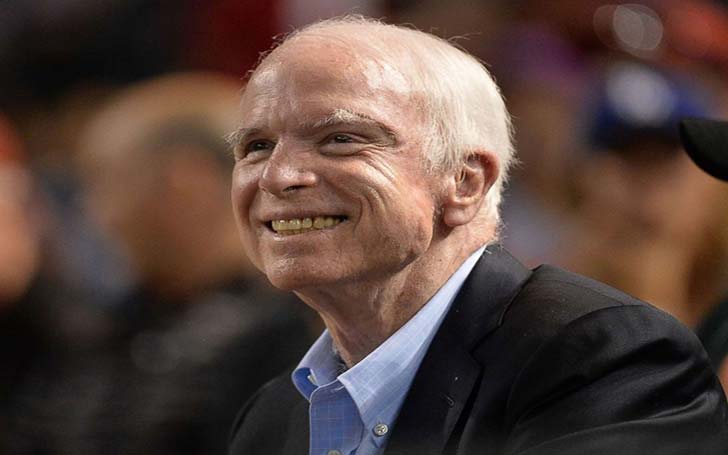 Arizona's Senator and former presidential candidate Sir John McCain has passed away. He died on Saturday 25 August 2018 in Arizona surrounded by his family. He was a prison of war, a naval bomber pilot, two-defeated presidential candidate, conservative maverick, giant of the scene, and an abrasive American hero with a twinkle in his eye.

He was diagnosed with an aggressive brain tumor last year and went through a longtime medical treatment. On Friday, his family announced Mr. McCain who left Washington in December that he had decided to cease treatment.

His wife, Cindy McCain confirmed his death via her Twitter,

My heart is broken. I am so lucky to have lived the adventure of loving this incredible man for 38 years. He passed the way he lived, on his own terms, surrounded by the people he loved, in the the place he loved best.

Sir McCain’s daughter, journalist Meghan McCain said the "task of her lifetime would now be to live up to his example, his expectations and his love".

After the announcement of his death news, his well-wishers waving flags lined the street as a hearse brought his body from his ranch in Sedona, Arizona to funeral home in Phoenix.

The six-term senator for Arizona and Republican nominee of Presidential election 2008 was diagnosed after finding tumor during surgery to remove a blood clot from above his left in July 2017.

His family said that his funeral will be held at the Washington National Cathedral and his burial in Annapolis, Maryland.

McCain’s death is a huge loss for the American political movement. After his death, numerous political leaders including current president Donald Trump, First Lady Melanie Trump, former president Barack Obama and The Ellen Show host Ellen Degeneres paid tribute to him and his family via their Twitters. Here are the tweets.

My deepest sympathies and respect go out to the family of Senator John McCain. Our hearts and prayers are with you!

Our thoughts, prayers and deepest sympathy to the McCain Family. Thank you Senator McCain for your service to the nation.

Our statement on the passing of Senator John McCain: pic.twitter.com/3GBjNYxoj5

I was honored to have met John McCain. He always stood up for what he believed was right. Sending love to his family on this very sad day for our country. pic.twitter.com/SiIsXJMqvo

John McCain was born on 29 August 1936, at the Coco Solo Naval Station in Panama. His father and paternal grandfather were both respectable officers in the US Navy. He followed their footsteps later involved in Army force.

He graduated from the United States Naval Academy in Maryland in 1958. He served as a Navy pilot and was almost killed in a fire on the aircraft carrier USS Forrestal during the Vietnam War.

He later involved in politics and elected to the US House of Representatives in 1982. He won his first term in the Senate in 1986. In 2000, he was a Republican presidential candidate but lost to then-Democratic candidate George W. Bush. After eight years, he fought back to win the Republican nomination but lost to Mr. Barack Obama.