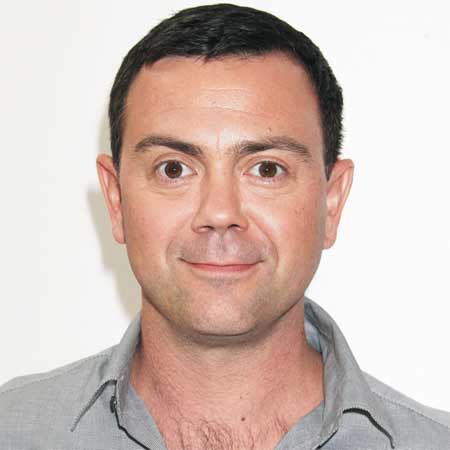 Widely recognized for his breakout character Charles Boyle on the Fox sitcom Brooklyn Nine-Nine, Joe Lo Truglio is one of the prominent faces in the Hollywood Industry. He is an actor, comedian, and writer who gained further praise for his mind-blowing performance in the television series The State and Reno 911! and movies like Wet Hot American and Role Models. In addition to his acting, the versatile actor also voiced in numerous video games including The Warriors and Grand Theft Auto: San Andreas.

The comedic actor spent most of his early childhood days in Margate, Florida collecting Mad magazines, shooting horror movies on a Super 8, drawing homemade comics, and fishing in his backyard canal. He holds American nationality and regarding his ethnicity, he is of Italian and Irish descent.

Truglio also has a brother named Brian N. Lo Truglio.  He graduated from the Coconut Creek High School in 1988.  At that time, he also became the part of Thespian troupe 2617.

Following The State's hiatus in 1996, Truglio immersed himself in video games, commercial, and television episodic work.

Joe Lo Truglio's professional TV role came in 1992 when he appeared in the TV series You Wrote It,  You Wrote It. He featured in a 2005 Comedy Central show Stella, in 2005. His other prominent TV work includes Glenn Martin DDC, Free Agents, American Dad!, Robot Chicken, and Wedding Band.

Truglio has been portraying Charles Boyle in hit American police television sitcom Brooklyn Nine-Nine since 2013. He has played over 90 episodes in the series. In 2017, he appeared in Animals, Wet Hot American Summer: Ten Years Later, Dice, Easy, and Do You Want To See s Dead Body?.

Some of his hit TV series are listed below,

Truglio voiced Markowski in the big budget movie Wreck-It Ralph, in 2012. In 2017-18, he appeared in Win it All and A Futile and Stupid Gesture.

He also voiced in a number of video games, including  Grand Theft Auto: San Andreas and The Warriors.

Joe Lo Truglio has collected a large amount of fortune. The exact amount of net worth is yet to be disclosed but as per the estimation made by various online sources, the comedic actor's net worth is believed to be around $1 million.

Here is the list of his box-office hit movies,

Joe Lo Truglio is married to his actress wife Beth Dover. The couple started dating back in 2010 and got engaged in 2013. They got married the following year, on April 14th, 2014 in a very chic and rustic wedding.

The power couple shares a son named Eli James Lo Truglio, born on 8th March 2016. They mostly post pictures of their baby boy on their social media. Together for more than four years, the pair still share a strong bond.

A video where fans ask about Lo Truglio's favorite episodes of Brooklyn Nine-Nine.