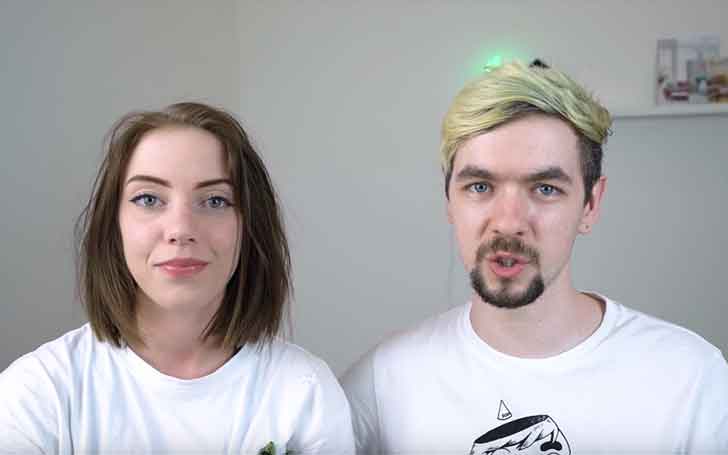 Sean William McLoughlin aka Jacksepticeye is again in highlights. This time, not because of his friendship with fellow YouTuber Markiplier but his relationship with his girlfriend Signe Hansen. He had been dating her for a few years. She is a Danish-based digital artist, also a popular YouTube star.

How and when did they meet? Afer the YouTuber split with his ex-girlfriend Hansen, who is McLoughlin dating now? We have all the details about their love life right here.

Jacksepticeye And Signe Hansen- How Did They Meet?

Irish YouTuber Sean William McLoughlin better known by his pseudonym name Jacksepticeye is in a relationship with fellow YouTube star Signe Hansen for a long time.

The duo first met an online blogging platform Tumbler. One day, he found her on Tumbler and saw her artistic works then asked if he could use one of her pieces of art for his video’s thumbnail. She agreed to that and eventually they started talking. Later, on her birthday, she did a live stream and drew his portrait. Impressed with her work, he wanted to know her on a personal level.

Their friendship gradually turned to a romantic relationship. He even mentioned his relationship with her on in one of his Tumbler posts under the title Living Together.

Signe and I are super happy together and moving in together is a HUGE deal, it’s a massive step and it’s a new thing to get used to. The last thing we need is people spreading doubt or rumors about our relationship adding extra stress that doesn’t need to exist. For those of you out there who are happy for us, we really appreciate it and it means a great deal to see the support. Will Signe be in videos at some point? who knows! We haven’t thought that far ahead yet and don’t want to do too much too soon.

McLoughlin posted a photo with her captioning ‘Date Night’ on Valentine’s Day 2018. It looks like their relationship is smooth sailing. But it has been reported that the couple despite loving and the long relationship broke up in October 2018.

As of now, judging by McLoughlin's social media, he is dating his new girlfriend, GG Gab. He shared a post on his Instagram account with Gab where he captioned "Lunch date ??" on March 15. Gab is also a Youtuber who has over 126.22 K subscribers on his YouTube channel.

According to some online sources, he met a Korean girl online in late 2010. He eventually began dating her. But, they could not communicate properly due to their location difference. After a few years, he finally earned a hefty amount of money from his YouTube career and went to Korea to meet her. Unfortunately, he separated from her after a couple of months.

Signe Hansen is a Danish digital artist who is also a YouTube personality. She is famous for her art channel Wiishu on YouTube. She also enjoys over 400k followers on Instagram and is also quite popular on Tumbler.

Hansen uploads digital art contents on her YouTube channel. She also featured with her boyfriend on many of his videos. She once posted a speed paint video of YouTube star Markiplier on her channel.