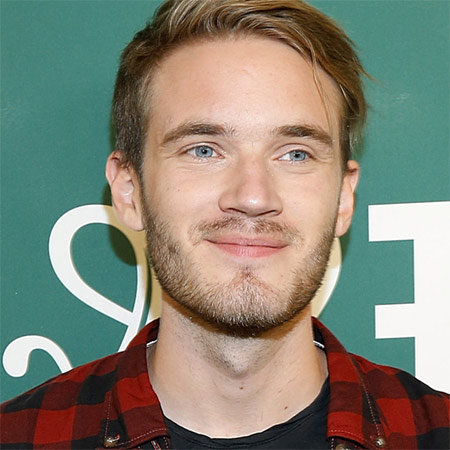 PewDiePie is a web-based comedian who has been known for his commentaries as well as vlogs on the hit video channel YouTube, PewDiePie. He is one of the most successful YouTube personalities in the world with millions of subscribers. He has over 79.9 million subscribers on his self-titled YouTube channel. He is best known for his Let's Play videos and vlogs. Moreover, he earns millions from his YouTube career. YouTube has also a mega fan following on his Instagram account with over 15.2 million followers, as of 2019.

Early Life And Education Of PewDiePie

PewDiePie was born Felix Arvid Ulf Kjellberg on the 24th of October, 1989  in Gothenburg, Sweden under the birth sign Scorpio. He is Swedish as per nationality and as far as his ethnicity is concerned, he is Caucasian. He is the son of Lotta Kristine Johanna and Ulf Christian Kjellberg. Both of his parents are chief executives.

From an early age, PewDiePie was interested in art and playing on his Super Nintendo. His obsession with video games grew during his adolescence. At the time, he used to spend most of his time in his bedroom for gaming or at the internet.

When PewDiePie was in his last year of high school, he bought a computer by selling his grandmother's artwork.

He initially studied industrial economics and technology management at the Chalmers University but eventually dropped out after starting his successful career on YouTube. His parents refused to support him for having dropped out of college and he started off working at a hot dog stand and funded in videos.

PewDiePie started his career in YouTube in 2006 by creating a YouTube channel, ''PewDie'' where pew is a slang for the sound of laser gun firing. He uploaded his first video on 29th June 2012, ''Pewdie Plays: Skyrim- Part 1 - I'm Not A Freakin' Lizard!'' which earns over 3.1 million views.

Later, he forgot the password of his YouTube channel so when he returned to YouTube, he was forced to form a new channel in 2012, ''PewDiePie.'' On 27th July 2012, he posted his first video, ''BARRELS KEEP ARRIVING IN MY MAIL! D: - (Fridays With PewDiePie-Part 37). The video gained over 1.6 million views. Since the date of 15th August 2013, PewDiePie has established himself as being the person with the most subscribed channel on YouTube.

He has also had his account become the most viewed in all time. This personality has also been named as one of The World’s 100 Most Influential People in 2016, by the Time magazine.

PewDiePie’s coverage of games, including the indie games has boosted the sales of the titles that he plays. His videos are particularly focused towards sharing the gaming moments by starting off with a high pitched goofy voice, following with the delving into the videos.

PewDiePie's career took off after he filmed himself screaming his way around the horror game Amnesia. He received a huge praised and was requested for more such videos. His channel quickly grows from 100 million to 200 million views per month. In 2013, his channel became the most-subscribed YouTube channel in the world.

In August 2014, Mark Studios launched a PewDiePie iPhone app. The same month, he announced that he would be disabling the comments on his videos because of spam. Later, he permitted approved comments only.

Two years later, he used some offensive words like ''gay'' and ''retard'' and later gave the explanation stating,

''I just thought things were funny because they were offensive. I would say a lot of stupid shit.''

In November 2016, he threatened his fans to delete his channel once it reaches 50 million subscribers. In December, his channel reached 50 million videos but did not delete the channel rather claimed that the whole thing was just ''a joke.''

The YouTuber came to controversies for his words. Later, he apologized,

''I’m really disappointed in myself because it seems I’ve learned nothing from these past controversies. Being in the position I am, I should know better.''

As of 2019, his YouTube channel has over 79.9 millions subscribers. On 1st March 2018, along with his girlfriend Marzia, PewDiePie announced their unisex clothing brand Tsuki in a YouTube video. Furthermore, In Dec 2014, he was a cast in two episodes of South Park alongside Trey Parker.  The following year, he went on to play the role in TV series Oscar's Hotel for Fantastical Creatures alongside PJ Liguori and Mamrie Hart.

The talented YouTuber, PewDiePie has an estimated net worth of $30 million as per Celebrity Net Worth. Here is the list of his earning in the different year:

The You Tuber owns a mansion and has a Porsche 911 worth $91,528. He is also much popular on social media especially on Instagram account with over 15.2 million followers. It also plays one of the major roles to boost up his net worth. The Instagram star who has over 1 million followers can command over $10K-20K per promotional post.

The 30 years old, PewDiePie is married. He is married to longtime girlfriend-turned-wife, Marzia Bisognina on August 19, 2019, in Kew Gardens in London. The social media personality shared the news of his big day through his Instagram post with some wedding picture of the couple with the caption,

We are married!!!! I ‘m the happiest I can be. I’m so lucky to share my life with this amazing woman. 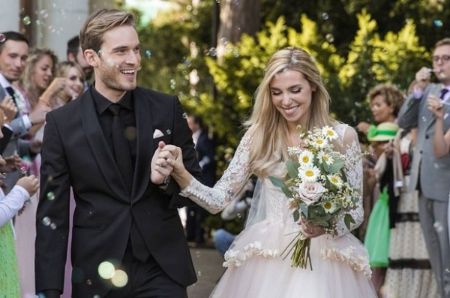 On the other hand, Marzia also shared some of the pictures of their wedding with the caption stating that they shared the wedding vows exactly eight years after they first met.

He started dating his girlfriend Marzia Bisognina after the couple met for the first time in 2011 through online and began a long-distance relationship. She is also a YouTube personality known better as CutiePieMarzia.

He told about his dating life with his girlfriend,

''If there was something I learned at this point was, if there is something you want, grab it, otherwise drop it. So I went to Italy. I did not even tell anyone that I was going away. I just left home and left a note to my parents in the kitchen and told them that I could not watch the dog anymore. 'My deal for staying at home was that if I did not have a job, I had to walk the dog every lunch, a task I handled miserably."

The couple started a live-in relationship in Italy then moved to Sweden. In July 2013, he moved to Brighton, a UK seaside and stayed together. They share an apartment with their two pugs, Edgar and Maya.

They are together for years but are not married yet as they might not be ready to start their relationship as husband and wife.