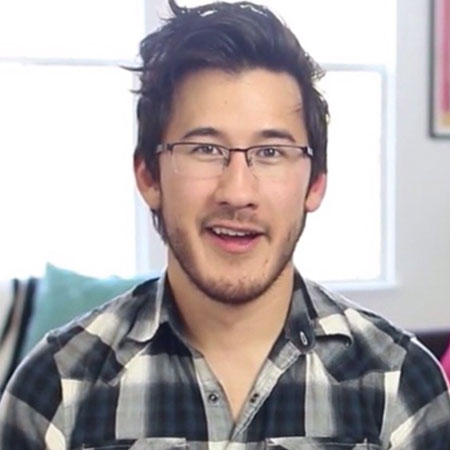 Best known as Markiplier in the internet zone, Mark Edward Fischbach is an American YouTube personality. He is a Let’s Play gaming video specialist, being the 22nd most-subscribed channel on YouTube. He is one of the richest YouTubers of 2017 too. His channel Markplier has 23.49 million-plus subscribers and 9.7 billion-plus video views, as of 2019. He has supported several charitable works and movements. He has raised over $1 billion for numerous organizations.

Markiplier was born Mark Edward Fischbach on June 28, 1989, at the Tripler Army Medical Center in Honolulu, Hawaii. His father served in the military is based in Honolulu where he met Markiplier’s mother, a Korean descent woman.

Markiplier is an American by nationality and has mixed ethnicity. He has one older brother named, Jason Thomas Fischbach, an artist, and author by profession.

After his birth, the family moved to Cincinnati, Ohio, where Markiplier got raised and completed his education. Markiplier has attended the University of Cincinnati with a major in biomedical engineering. However, he dropped out of college in order to pursue his YouTube career.

Markiplier started out his career on YouTube on May 26, 2012, under the username Markiplier, with which, he is popular today. Initially, he started out on YouTube video with the first series of a playthrough video game Amnesia: The Dark Descent.

After the creation of the new account MarkiplierGAME, his popularity inclined day after day being ranked on top 61 by the New Media Rockstars in 2014. After the success, he moved to Los Angeles for seeking a wider platform to increase his popularity on YouTube.

Markiplier primarily was on the playthroughs of indie and horror games but later he started creating the sketch comedy being collaborated with other fellow YouTubers that he met after moving to LA including Jacksepticeye, Game Grumps, Cyndago, Yamimash, Jack Films, and many others.

Markiplier is known for his sensationalized video game commentary which includes the screaming, yelling, and cursing in the video game. He does not censor the profanity, however, uses subtitles like ‘duck’ for ‘fuck’ and ‘itch’ for ‘bitch’ in the video. His channel is branded with a pink mustache. His step-niece, Miranda was killed in a tragic car accident at the age of 19, on June 19, 2018. And 5 days later, he released a video titled update.

Has $24 Million; Journey To Millionaire

According to Celebrity Net Worth, his net worth is $24 million, as of 2019. Markiplier has over 9.7 billion +YouTube views and more than 21.25 million + subscribers on his YouTube Channel, as of August 2018. With his popularity on YouTube, Markiplier earns a good amount from the ad campaigns.

The YouTube star has also established himself as one of the highest-earning personalities on YouTube. Markiplier earns between $5 and $6 million in a year from his various social media endeavors.

Markiplier also earns a decent amount from selling his merch in his store. He sells different products from clothing to sticker which is available for $12-$55 according to product differentiates.

Markiplier is also engaged in the Make-A-Wish Foundation to meet fans. promotes several products and brands and through his videos. He charges a hefty amount for endorsing these brands.

Markiplier has done multiple charity streams and fundraisers with other YouTubers, friends, and by himself. With the support of his fans, he has been able to donate to many different charities that benefit many different interests.

Forbes reported in 2017 that Fischbach and his fans had helped raise roughly $3 million for charity in past fundraising streams. On the site, Tiltify.com, which he uses for donating to the causes the total amount raised on his current profile as of April 30, 2018, is $1,506,793.81.

Markiplier is engaged in charity live streams through his channel in order to campaign for and collect donations for various charities including Cincinnati Children’s Hospital Medical Center, the Depression, and Bipolar Support Alliance, Best Friends Animal Society and Make-a-wish foundation.

The YouTuber has received nominations for awards such as Steamy Awards for Gaming, Shorty Awards for Tech and Innovation Gaming, and Kids Choice Awards for Favorite Funny YouTube Creator. He has won awards; Make-A-Wish Foundation Award Ceremony Golden for Celebrity of The Year, and Golden Joystick Awards for Best Streamer/ Broadcaster.

The YouTuber has also a mega fan following on his Instagram account with 7.2 million followers, as of 2019. It is likewise the major source of net worth.

Markiplier is in a serious relationship with his girlfriend Amy Nelson aka Peebles. Amy Nelson is a native of Boston and moved to Los Angeles, where they both met. Markiplier and Amy are both avid fans of Disney.

Both the couple is very active on social media including Facebook, Twitter, Instagram, YouTube, and Google+.  He has millions of followers on his Instagram and Twitter. They are a thing in the town to talk about and why not, Markiplier is one of the top 22 YouTubers in the whole world. He is also active on the live video-sharing app Twitch. tv.

Additionally, Markiplier confessed his past love affair with his ex-girlfriend prior to Amy Nelson, which was abusive. He currently resides in Los Angeles, California, along with his family.

He was once rumored to be dead and he hilariously addressed the rumor via Twitter.

Rumors of my death were greatly exaggerated... pic.twitter.com/2QZjFeaDU3

But once he takes a break after the death of his niece, Miranda Cracraft who was just 19 years old. The reason for her death was a car crash on June 19, 2018.

Markpiler's Age, Height, And Other Facts