Game Of Thrones Season 8 Is Set To Be Released In April 14, 2019, Here Are The Few Crazy Fan Theories That Might Actually Be True!! 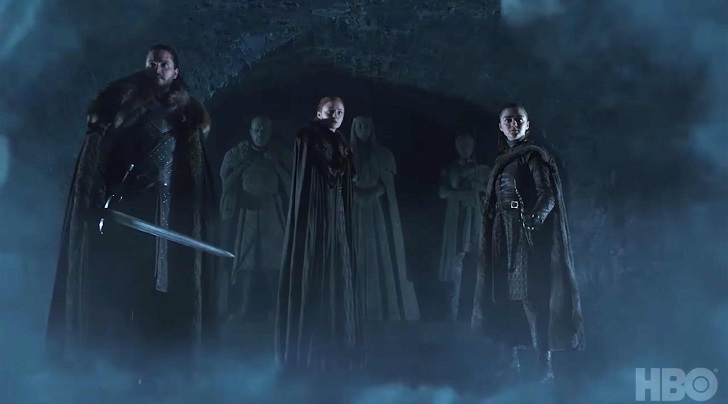 Game of Thrones, a series which gained enthusiasm of fans with fierce battles, unassumable death, and juicy romance. The latest season 7 Games of Thrones amassed high public attention and curiosity of the people.

There hasn't been any leak of the story this year though it is said: "Prevention is better than Cure". So taking precautions and safeguarding the thrill, it is reported that the show is filming the multiple endings.

Although the storyline could not be predicted there are many fan theories riled up. Could any of the prevailed spoilers happen in the actual show?? Let's discuss some fan theories here...

Jon Snow ( Kit Harington ) is indeed thought to be "Prince Who Was Promised" of the Reed Priest religion. He needs to have the legendary sword Lightbringer which can only be obtained if it's quenched in the heart of a loved one aka "the living fire".

So you thought Daenerys Targaryen ( Emilia Clarke ) and Jon would make a loving couple and suddenly Jon kills her? Quite awkward...

Here as a proof, the original incarnation of "prince who was promised", Azor Ahai, got the sword by stabbing his wife's heart. Moreover, it's crazy to see Nissa Nissa ( Naomi Watts ) letting him do it...

In the Valonqar theory, Jamie Lannister ( Nikolaj Coster-Waldau ) is destined to kill his fraternal twin sister, Cersei Lannister ( Lena Headey ). As Jamie stopped the Mad King, Aerys Targaryen to save the city, he would have a good chance to kill Cersei too.

Though the duty of killing Cersei still could go to Tyrion Lannister ( Peter Hayden Dinklage ) whereas the Valonqar theory is the most reliable and believed theory. Valonquar in Valyrian reads "little brother".

In season 7, it was a huge relief for the audience to know that they were not sharing parent-child bond. We come to know that he is not the only bastard but also was the true successor of the Iron Throne.

The executive producer D.B. Weiss of GOT told TV Insider:

"From a dramatic standpoint, it makes things interesting, because the story is no longer about who Jon's parents are, it's about what happens when Jon finds out."

It would be interesting to find out who is the biological parents of Jon Snow and more amusing to see the reaction of Jon.

Bran Stark, Who Is He?

Bran Stark ( Isaac Hempstead-Wright ) was actually understood to be at the Winterfell as of season 7 finale. But why is he not appearing in the teaser is itself a mystery?

You laughed at my ‘Bran is the Night King because they have a similar facial structure’ theory for years but who feels ridiculous now. https://t.co/uQKe3sQuZo

An icy breeze blows in the recent teaser, showing that the White Walkers are near. The long prevailing theory of Bran Stark being the Night King, leader of White Walkers and his absence in the season 8 trailer could be hinting towards the fans theory's confirmation.

The 1:44 clip featuring Jon Snow, Arya Stark ( Maisie Williams ) and Sansa Stark ( Sophie Turner ) discovering their own graves in the region of the Winterfell crypts.

As per GoT history, statues resembles the graveyards of a person. The three statues show the present Sansa and Arya but Jon's statue seems to look a lot older than present him. This hint is enough to give you the chills.

Does this mean Jon survives the forthcoming fierce battle between the living and dead?

To know that be ready to feel the thrill and have patience till 14 April 2019.