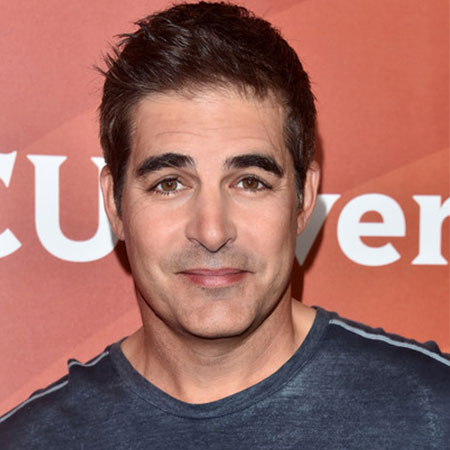 American actor, and model, Galen Gering is most popular for his appearances in the long-running NBC soap opera Days of Our Lives as Rafe Hernande and in Pa s sions as Luis Lopez-Fitzgerald. As a model, Gering has appeared in over 50 national commercials.

Galen Gering was born Galen Laius Gering on 13th February 1971 in Los Angeles, California, USA, under the birth sign Aquarius. His mother is of Basque descent from Spain, whereas, his father was from a Russian Jewish family.

Gering’s parents are Alan Gering and Michele de Oñate, who is a renowned west coast artist. He also has an older sister, Charissa. At the age of eighteen, Gering moved to New York City to start his modeling career.

Gering joined the high school in California and then went to New York City to pursue his career in acting. Prior to joining New York University, he moved to Europe to start his modeling career.

Galen Gering portrayed the lead character of Luis Lopez-Fitzgerald in an American television soap opera, Pa s sions from 1999 to 2008. He acted alongside  Eric Martsolf, Mary Elizabeth Winstead, Natalie Zea, and many others. During the time, he also acted in Miss Match (2003) as Adrian and Mein Liebchen (2006) as Bradley.

Soon After, in 2008, Gering started portraying another lead role Rafe Hernandez in an American daytime soap opera, Days of Our Lives, alongside Deidre Hall, Kristian Alfonso, Nadia Bjorlin, Kate Mansi, and many others.

Additionally, Gering’s other television credits are, 10 Items or Less (2009), Venice: The Series (2009-2012), and Talking Marriage with Ryan Bailey. Furthermore, he also appeared in an episode of the American reality television series, Dirty Soap,

The handsome actor, and model, Galen Gering has made a good fortune from his outstanding career. As of 2019, his net worth is estimated to be around $4 million. Similarly, he has also shared $1 million worth along with his wife.

Gering has been active in the entertainment industry since 1999 and has made his appearances in many television series. As per some online sources, the average salary of American soap opera actors is $1,500 to $3,000 per episode.

The millionaire actor is living a lavish lifestyle along with his $4 million. Currently, he resides in $1.435 million mansions which he bought in 2003 along with his wife. His house has feature 4.5 bathrooms, 5 bedroom.

Galen Gering’s Personal Life: Who Is His Wife?

Galen Gering is married to a model and an actress's wife Jenna Hulett. He tied the knot to his longtime girlfriend on January 3, 2000, at the Graceland Wedding Chapel in Las Vegas, Nevada.

Thankful to be spending time with family and friends enjoying a bountiful feast, drinking wine, and watching @brianbowensmith savagely destroy a turkey. Also, I have know idea what @jensengering has on his his shirt but he always finds a way... Hope everyone had a fantastic thanksgiving!

In 2011, they appeared in the E! reality series Dirty Soap with their kids.

Taking about his online presence, he is active on Instagram and has around 61.9k followers as of early 2019.